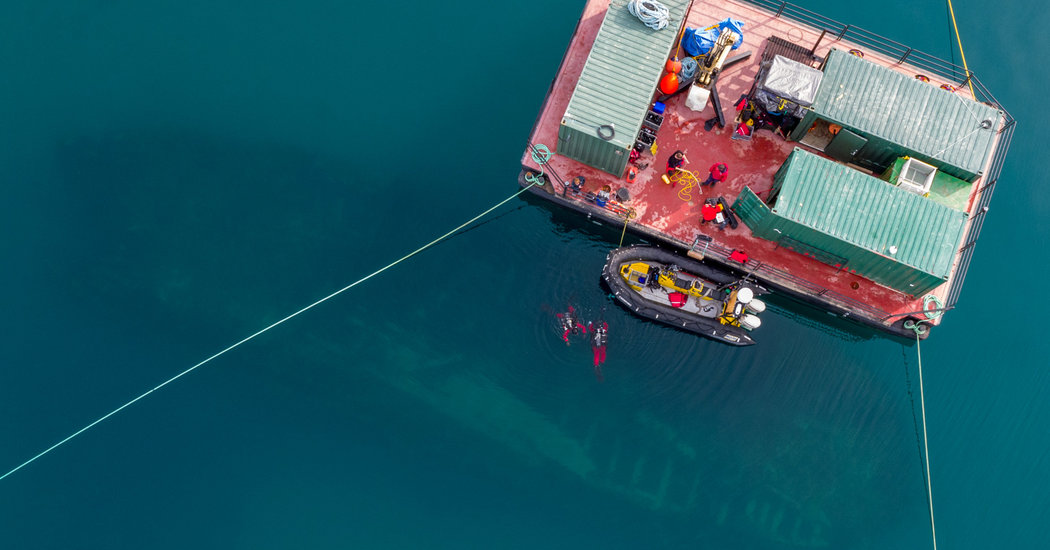 There was a bit of sealing wax with a fingerprint, a brush entangled with strands of hair, and a set of lieutenants’ epaulets.

These were among about 350 artifacts that were recently plucked from the sunken crevices and cabins of the H.M.S. Erebus, one of two naval ships that vanished after setting out from England more than 170 years ago in search of a Northwest passage across the Canadian Arctic.

The disappearance of the Erebus and the H.M.S. Terror is still a mystery, part of a story that has eluded scientists, rescuers and historians for more than a century. On Thursday, Parks Canada, Canada’s national parks service, and representatives from the Inuit population said they hoped the newly recovered artifacts from the Erebus would help them reconstruct what happened aboard the vessels before they sank.

“This is only the beginning of the excavation,” Ryan Harris, the senior underwater archaeologist and Parks Canada’s project director, said in an interview. “We are trying to learn the sequence of events, basically the historical narrative.”

Part of the investigation would be devoted to unraveling what life was like for the crew members as they confronted their own mortality in extreme conditions, Mr. Harris said. “What their lives were like on a ship of exploration, three, four years into this expedition,” he said. “They see their comrades fallen, that they weren’t ever going to see home again.”

The disappearance of the ships, which formed the basis for the AMC series “The Terror,” has captivated historians and scientists, and prompted dozens of search missions over nearly two centuries.

The ships set off from England on a morning in May 1845, with a cat, a Newfoundland dog named Neptune, and a monkey named Jacko, according to the 2017 book “Ice Ghosts” by Paul Watson, which documents the expedition’s history. Under the command of the explorer Sir John Franklin, their aim was to chart a Northwest passage to India and China.

In 1846, after the expedition sailed into Canada’s Arctic Archipelago, the ships became jammed in ice off King William Island. In 1847, Franklin died, and in 1850, the British Royal Navy started a search for the ships and crew, Mr. Watson wrote.

The 129 sailors eventually perished, and the vessels drifted to their frigid graves.

Their story has surfaced in fragments. In 1858, a search party found two cursory notes left by the crew describing how the ships had become trapped in ice, Franklin’s death and plans to find a path to a trading post on Hudson Bay.

But the wreckage lay quiet for more than a century until 2014, when a remotely controlled underwater vehicle picked up its silhouette near King William Island in the territory of Nunavut — the place where the Inuit, the region’s aboriginal people, have long said the ships had been crushed by sea ice.

It was the sixth attempt by Canada’s government to locate wreckage from the doomed voyage.

Last year, Parks Canada and Inuit partners dispatched an underwater archaeology team to the site of the Terror to map the wreckage, revealing a ghostly video tour of the ship’s long-abandoned decks. Frozen in time were bottles and decorated plates on shelves, as well as beds and other furniture. A desk in the captain’s cabin most likely holds documents containing crucial information about the expedition, possibly including details about what went wrong.

Excavations on the Terror have not yet started. But teams have set to work on the Erebus, slowly collecting items over the years, including a belt buckle and a boot.

In their latest excavation, in August and September, the months most suited to open navigation in the ice-covered waters, they probed areas of the ship that were accessible and that promised to yield artifacts, such as the officers’ quarters, the pantry, niches for hammocks, sea chests and cabins.

The 350 artifacts collected in 93 dives made it the most successful excavation period since the discovery of the shipwreck. It was also the first year that the team had been able to link artifacts to specific crew members.

Divers used suits with air hoses and umbilical lines that pumped warm water into the suits from the surface for about three hours, Mr. Harris said. Once they drew near to the vessel, which was about 40-feet deep in near-freezing 35-degree water, they found items that will help researchers reconstruct a narrative of the discipline of the Erebus’s crew, their social life and onboard hierarchies in the months before the ship met its end.

The epaulets, the only item left behind in an officers’ cabin, may have belonged to Third Lt. James Walter Fairholme, the teams said in a statement on Thursday. But what became of him? Do they imply circumstances that called for the abandonment of rank and a reassignment of cabins in a crisis?

“As mortality increased, several people could have occupied them,” Marc-André Bernier, the manager of Parks Canada’s underwater archaeology team, said in an interview, referring to the cabins.

There is a toiletry decanter, discovered on a lower deck, whose contents have still not been identified. Strands from a hairbrush will be subjected to DNA analysis. The brush is of high quality, likely to have been used by an officer. There are coffee beans. A fingerprint has been detected on sealing wax. A stamp possibly belongs to Edmund Hoar, the steward.

The team was puzzled by one discovery in particular: an accordion. “There are always finds that surprise you,” Mr. Bernier said. “Makes sense to have on the ship — part of the entertainment in a long winters’ night.”

As they are brought to the surface, the items will be X-rayed, subjected to diagnostic tests, and cleaned — 72 species of marine life are clinging to the wreckage.

The goal is to find “personal items that touch these individuals and give an insight into the heart of the expeditions,” Mr. Bernier said.

And there could be human remains, Mr. Harris said, citing Inuit lore of such sightings on the vessels.

Artifacts from the Erebus have been previously discovered by search parties or obtained by Inuit people who encountered the expedition on King William Island, Nunavut, one of the last places Franklin’s men were seen. Those pieces have been preserved in the National Maritime Museum in Greenwich, England.

But the items coming to the surface from the ship itself could signal a turning point in understanding the ship’s final disastrous months, said John G. Geiger, the chief executive officer of the Royal Canadian Geographical Society.

“The ships are an incredible storehouse of information and artifacts,” he said. “All that had ever been found until that point were the items carried by the men in a sort of death march, that they transported off with them.”

There is still much to be uncovered on the Erebus. Three cabins have been mined, and 17 remain. Many drawers and cabinets are sealed, and an upper deck has collapsed, entombing Franklin’s cabin and making it “a very difficult but enticing place,” Mr. Harris said.

“There is the promise, the hope, of coming across written documents of what transpired,” he said.

‘It’s Not The Virus’: Mexico’s Broken Hospitals Become Killers, Too

F.D.A. to Allow Use of KN95 Masks Approved by China

Deciding to Postpone the Olympics Was Tough. Actually Moving Them May...

Poland and Hungary Use Coronavirus to Punish Opposition

Caught Between Worlds? For Elizabeth Acevedo, It’s a Familiar Feeling