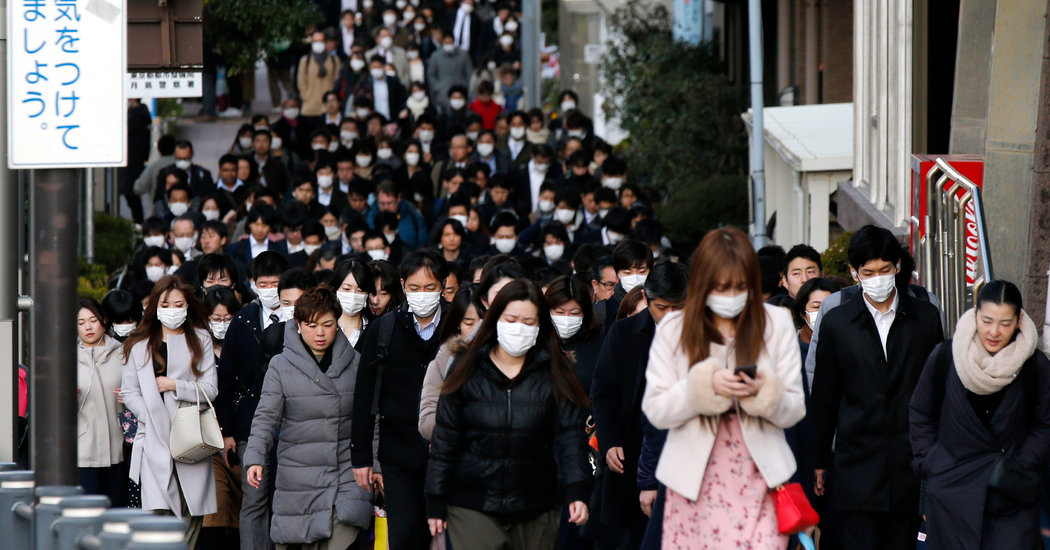 Rain was falling on the night of Jan. 18, so the windows of the Tokyo party boat were shut. Inside were about 90 guests of a local taxi association who were celebrating the new year as the vessel floated down the Sumida River. Also on board, unbeknown to them, was a coronavirus capable of spreading ferociously.

It did just that. A driver in his 70s soon fell ill with fever; he later tested positive. The same day as his diagnosis, his mother-in-law died; she also was infected. Officials then discovered that 10 others from the boat were, too, including an employee who had served passengers from Wuhan, China. Still more who did not attend the party caught the virus after coming into contact with those who did.

As public health officials look for clues to one of the biggest uncertainties about the new coronavirus epidemic — whether it will eventually expand rapidly beyond its center in China — they are closely studying clusters of cases that have emerged recently in Japan.

The issue has taken on more urgency as passengers have begun walking off a contaminated cruise ship in Yokohama where 621 people have tested positive for the virus and two later died. Experts fear that some who were cleared to leave an onboard quarantine could later test positive, spreading infections on land in the same way that the party boat has done.

Alarmed officials are rushing to learn more about how the virus is transmitted, including how many of those infected experience mild symptoms or none at all, and whether it can be spread by people who are symptom-free.

Katsunobu Kato, Japan’s health minister, said the country had entered “another phase” in its fight against the coronavirus.

“Doctors at the medical institutes share the recognition that the numbers of infection cases will increase in the future and that it’s necessary to take firm measures,” he said at a news conference on Sunday. The government announced a $139 million package of urgent measures to contain the outbreak, including strengthening its testing and quarantining capacity.

Concern about the transmission of the virus has grown with cluster cases in Japan, which has reported 86 infections outside the cruise ship, as well as in Singapore, where 84 infections have been confirmed, and in South Korea, which has had 104. China has reported more than 74,000 cases and more than 2,100 deaths.

The figure in South Korea more than doubled on Thursday and officials tied 43 cases to a church in the city of Daegu. In Singapore, the government has identified five clusters and is investigating the connections within them. The virus has been detected in at least 25 other countries, with most infections involving people who had traveled from China.

“What we are worried about is sustained transmission in the community in countries outside China,” said Raina MacIntyre, head of the biosecurity program at the Kirby Institute of the University of New South Wales in Sydney.

“Because once it becomes widespread and there’s transmission happening in two continents, that means it’s a pandemic.”

Public health experts say most viral clusters are hard to investigate, and that is especially true with the current coronavirus outbreak, in which many infected people say they have no symptoms. If asymptomatic people can spread the virus, it will be much harder to slow its spread, as carriers transmit it unwittingly.

“There are ongoing silent transmissions” because of the very nature of the virus, Shigeru Omi, regional director emeritus of the World Health Organization’s Western Pacific region, said in a news conference on Monday.

David Heymann, an epidemiologist at the London School of Hygiene and Tropical Medicine, said there was no definitive evidence yet that people who are asymptomatic can pass on infections.

He said experts who are trying to understand the virus are waiting for information from countries outside China that are closely documenting cases.

“China has such an overwhelming number of patients that they are not able to do it meticulously,” said Dr. Heymann, a former chief of communicable diseases at the World Health Organization.

“How easily does it transmit from person to person?” he said. “We don’t know that yet.”

Virologists see two likely explanations for the spread of clusters. In one, a “superspreader” — a person who has the propensity to spew more germs than others — transmits the virus to a large group of people. Some of these superspreaders have no symptoms and feel well enough to go out, or they encounter a group of people with low resistance.

During the outbreak of SARS in 2002-03, the biggest reported superspreader was a 26-year-old airport worker admitted to Prince of Wales Hospital in Hong Kong. He infected 112 people, including every doctor and nurse who treated him.

Alternatively, people can independently catch a virus from contaminated surfaces. It is unclear how long the new coronavirus can survive on surfaces, but studies of other such viruses have found they can stay active for a week or more.

Four days after the river cruise, on Jan. 22, the mother-in-law of the taxi driver in his 70s said she felt fatigued. Six days later, the woman, who was in her 80s, sought medical help but was told to monitor her condition. On Feb. 1, she was hospitalized after being given a diagnosis of pneumonia.

Her respiratory condition worsened, and she was moved to another hospital on Feb. 6. She was given the coronavirus test on Feb. 12. A day later, she died, and the results of her test soon came back positive. Her death was the first from the virus in Japan.

After health officials in Tokyo discovered that the infected taxi driver was the son-in-law of the woman who had died, they started tracing his contacts. They discovered that he had attended the boat party, and tested everyone who had been there. Seven others who were confirmed infected said they had no symptoms.

Others, like a female employee of the taxi drivers association who did not attend the party, contracted the virus after having casual interactions with those who did. In yet another case, a doctor in his 60s tested positive after dining with a nurse — the wife of a taxi driver — who had been at the party. He, too, did not have symptoms.

Another cluster of cases in Japan has occurred in Wakayama Prefecture, where a surgeon in a hospital, a colleague of his, the colleague’s wife and their child tested positive for the virus, as well as two patients who visited the hospital. One of them was a farmer in his 70s who went to the hospital after the first doctor had stopped working.

The mother, wife and younger brother of a patient in his 60s from the same hospital also came down with the coronavirus, as did a nurse in his 30s who had temporarily worked on the Diamond Princess as part of the disaster response.

Yoshinobu Nisaka, the prefecture’s governor, said he could not rule out the possibility that infections had occurred within the hospital. “We’re having trouble tracking down how these people were infected,” he said at a news conference on Saturday.

In another cluster in Japan, four people from Aichi Prefecture were found to be infected: a couple who had traveled back from Hawaii and their friends.

Takaji Wakita, the head of Japan’s National Institute of Infectious Diseases, said that while it would be difficult to stop the transmission of the virus, the outbreak could be contained. He urged people during a news conference to consider telecommuting and to refrain from having meetings that are not urgent.

Dominic Dwyer, a medical virologist at the University of Sydney in Australia, said it was reassuring that governments were identifying clusters, because that was a sign that their public health surveillance was working.

“I suppose what one is concerned about is, are there other clusters going on that they haven’t recognized?” he said. “Identifying clusters is a sign of good laboratory investigation. But as for how good that is, time will tell.”

The N.B.A. and China Are Showing Signs of Reconciliation

A Mini-Mississippi River May Help Save Louisiana’s Vanishing Coast

Bruce McEwen, 81, Is Dead; Found Stress Can Alter the Brain