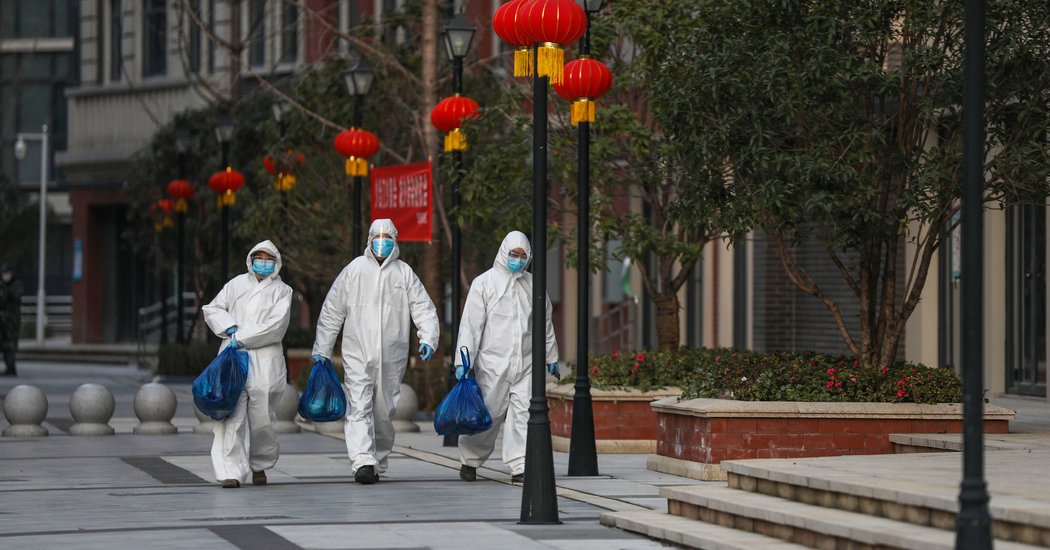 HONG KONG — The Chinese authorities announced hundreds of new coronavirus cases in Chinese prisons on Friday, underscoring the fast-spreading and unpredictable nature of the virus, which has popped up in far-flung areas with little known connection to the outbreak’s epicenter.

At least 500 prisoners and guards, in at least four different prisons across three provinces, had been infected with the virus, officials announced on Friday. More than 200 have been detected in one prison in the city of Jining, 450 miles east of Wuhan, the city at the center of the epidemic. Officials suggested that the Jining outbreak may have been tied to a coughing prison guard who turned out to be infected.

The new clusters showed, once again, the difficulty in judging the scale of China’s epidemic, amid concerns about underreporting and rapidly shifting definitions of confirmed cases. Before the prisoners’ infections were announced, Hubei Province, where the outbreak began, had already released a count of new infections in the previous 24 hours.

Later on Friday, officials there said they had revised the count, because they had received a handwritten tally of infected prisoners late on Thursday night. The prison system was not connected to the rest of the province’s disease reporting system, they said, renewing questions about the counting of cases and prompting a rare official acknowledgment that constantly changing tallies had sown confusion and mistrust.

“The adjustment of these data has aroused great attention from the society and cast doubt on the numbers,” Tu Yuanchao, deputy director of the Hubei Provincial Health and Health Commission, said at a news conference on Friday, referring to both the addition of the prisoners’ cases and recent adjustments to how Hubei defines a confirmed case.

The infected prisoners were among several surging counts on Friday. The number of cases in South Korea continued to soar, as officials there confirmed 100 new cases and the country’s second death. The new figures brought that country’s total number of infections to 204, the world’s largest number of cases outside of China and Japan.

Eighty-seven of the 100 new cases in South Korea were connected to a church in the southeastern part of the country. Officials said a 61-year-old woman who tested positive earlier this week, and who had attended services at the church, may have spread the virus there.

Infections in prisons may be especially concerning because of the risks of rapid transmission among people in close quarters.

There might be limited space available to isolate patients, who would likely be crowded indoors, in high density situations, said Dr. Benjamin Cowling, a professor of epidemiology at the University of Hong Kong. “It’s a really difficult situation to prevent transmission from occurring,” he said.

In a sign of the risks posed by the clusters in prisons, nearly a dozen officials were dismissed on Friday in relation to the outbreaks, according to state media reports. Among them were the party secretary of the provincial justice department in Shandong Province, home to Jining, and a warden and party secretary at a prison in Zhejiang.

Also on Friday, the Communist Party’s Central Committee, a group of about 370 senior officials, sent an investigative team to Shandong Province, to probe the prison outbreak there, according to People’s Daily, the party’s main newspaper.

The authorities in Shandong said in a statement that they would “quickly set up a hospital” on prison grounds to treat those infected.

Still, some expressed skepticism about the quality of prisoners’ care.

“Prisoners are routinely denied of access to adequate medical care even during normal times,” Yaqiu Wang, a China researcher at Human Rights Watch, said. “Now with medical resources stretched to the limit in many areas in China, it is hard to imagine prisoners’ medical needs would be a priority of the government.”

Nursing homes have also emerged as potential transmission hotspots, prompting concern given the virus’s documented toll on the elderly.

In the city of Qiqihar, near the Chinese border with Russia, a district party secretary was removed from his post because he had not done enough to prevent the epidemic, according to an official notice on Feb. 15. Of 10 confirmed cases in the district he oversaw, the notice said, one occurred in a nursing home.

In Zhejiang, an official said recently that the province had been the first in the nation to seal off nursing homes, barring all except some essential staff from entering.

“Everyone knows that the elderly are the key group for epidemic prevention and control, and nursing homes are a place where the elderly live in high concentration,” the official, Li Jie, said.

The virus is also spreading even in places that might be expected to have the closest monitoring and prevention. In Beijing, a spike in cases at two hospitals raised fears that the epidemic could be growing in a city so far largely spared from extensive infections.

An outbreak in this city would have great symbolic resonance, especially as the central authorities have urged workers to restart the economy, and China’s leader, Xi Jinping, recently touted “visible progress” in fighting the epidemic.

In Beijing’s Fuxing Hospital, on the city’s western side, at least 36 people are infected. They include eight medical workers, nine janitorial workers and 19 patients or their relatives.

The new figures reflected a large jump since Feb. 3, when city officials first announced that five medical workers had tested positive for the virus.

Another medical center, Peking University People’s Hospital, also recorded its first three cases: a woman who had previously been hospitalized and her daughter and son-in-law who had visited her after traveling to Xinjiang, the western region.

Beijing, compared to other provinces and provincial-level cities, has had comparatively few cases: 396 as of Thursday and only 4 deaths.

Dr. Cowling, in Hong Kong, said that though medical staff treating confirmed patients might be highly vigilant and well protected, infection could still occur in other wards of a medical center, if staff members there did not know they were treating someone with exposure to the virus.

The infection — and in some cases, deaths — of medical workers has for many Chinese become a potent symbol of the epidemic’s toll. On Thursday, another doctor in Wuhan died. The doctor, Peng Yinhua, was just 29 years old and had postponed his wedding to continue treating patients, according to a statement from the hospital he worked and local media reports.

Earlier this week, another high-profile doctor, Liu Zhiming, died. Dr. Liu was the director of the Wuchang Hospital in Wuhan.

Where Is Kim Jong-un? How Experts Track North Korea’s Leader

The Meg Writers' Next Project Is Sadly Not The Meg 2

Best Nintendo Switch games every gamer must own

Will Coronavirus Freeze the Search for Dark Matter?

Duterte Orders Cabinet Not to Visit U.S. After Official’s Visa Is...