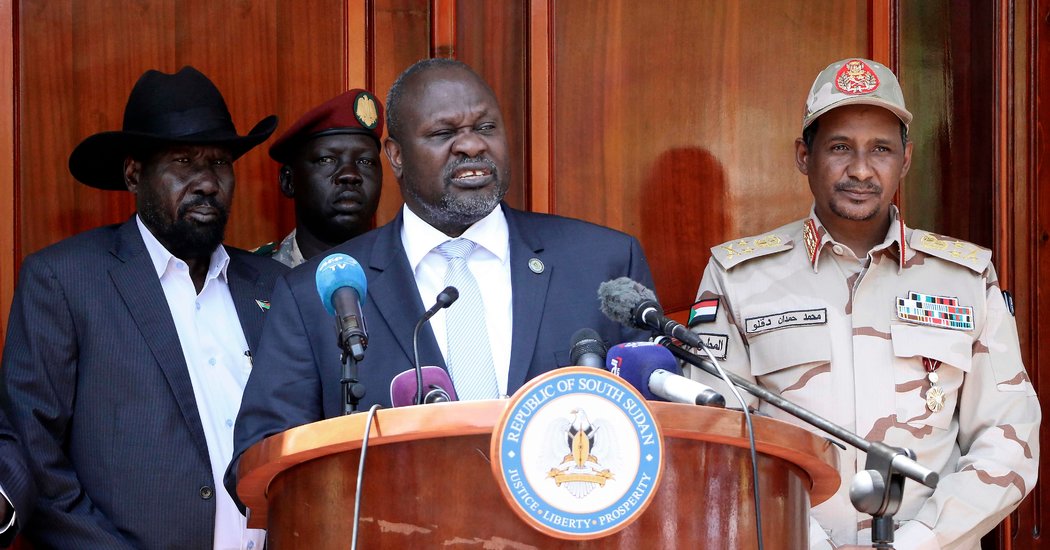 JUBA, South Sudan — South Sudan opened a new chapter in its fragile emergence from civil war Saturday as the opposition leader Riek Machar was sworn in as President Salva Kiir’s vice president, a day after the two men agreed to form a coalition government that many observers prayed would last this time around.

The arrangement has twice collapsed before and numerous attempts at peace have failed, including a deal that saw Mr. Machar return as vice president in 2016 — only to flee the country on foot months later amid fresh gunfire.

On Friday, Mr. Kiir dissolved the previous government of the world’s youngest nation just as the United Nations released a report documenting the war’s toll.

South Sudan slid into civil war in 2013, two years after winning a long-fought independence from Sudan, as supporters of Mr. Kiir and Mr. Machar, then a rebel leader, clashed. The conflict has killed nearly 400,000 people, and more than two million people fled South Sudan during the civil war. Mr. Kiir has urged them to come home.

Intense international pressure followed the most recent peace deal, in 2018. Last year, Pope Francis, in a dramatic gesture, kissed the feet of Mr. Kiir, who belongs to the majority Dinka ethnic group, and Mr. Machar, of the Nuer ethnic group, to coax them into putting differences aside.

The ceremony on Saturday ceremony began with a presentation to them of that photo as a reminder. Hugs and applause followed Mr. Machar’s swearing-in.

Exasperation by the United States, South Sudan’s largest aid donor, and others grew as Mr. Kiir and Mr. Machar in the past year pushed back two deadlines to take the crucial step of forming the coalition government. But with less than a week before the latest deadline, Saturday, each made a key concession.

Mr. Kiir announced a “painful” decision on the politically sensitive issue of the number of states, and Mr. Machar agreed to have Mr. Kiir take responsibility for his security. On Thursday, they announced they had agreed to form a government meant to lead to elections in three years’ time — the first vote since independence.

“Finally, peace is at our doorstep,” a reporter with the U.N.-backed Radio Miraya declared from Bor in long-suffering Jonglei State. In Yambio, youth waving flags took to the streets.

“I rejoice with the South Sudanese, especially the displaced, hungry and grieving who waited so long,” the archbishop of Canterbury, Justin Welby, said on Twitter.

Even as citizens breathed a careful sigh of relief, aid groups, analysts and diplomats warned of major challenges ahead. In an apparent sign of caution, no heads of state aside from Sudan’s leader, Gen. Abdel-Fattah Burhan, attended the swearing-in.

“While much work remains to be done, this is an important milestone in the path to peace,” the U.S. Embassy said in a message of congratulations.

Tens of thousands of rival forces still must be knitted together into a single army, a process that the U.N. and others have called behind schedule and poorly provisioned.

Observers have also stressed that this new government must be inclusive in a country where fighting has often occurred along ethnic lines and where several armed groups operate. Not all have signed on to the peace deal.

Mr. Kiir and Mr. Machar have said that outstanding issues would be negotiated under the new government.

Other vice presidents named by Mr. Kiir on Friday include Taban Deng Gai, a former ally of Mr. Machar who switched to the government side and last month was sanctioned by the United States over involvement in serious human rights abuses. Another is Rebecca Garang, the widow of John Garang, who led a long fight for independence from Sudan.

The humanitarian community, which has seen more than 100 workers killed since the civil war began, hopes the new government will lead to far easier delivery of food and other badly needed support as roughly half of South Sudan’s population of 12 million remain hungry. Some 40,000 are in famine conditions, a new report said Thursday, and a major locust outbreak in East Africa has arrived.

“Today in South Sudan, civilians are deliberately starved, systematically surveilled and silenced, arbitrarily arrested and detained and denied meaningful access to justice,” its report said Thursday. It noted that scattered deadly violence, the use of child soldiers, repression and sexual violence imperiled the fragile peace.

The Sentry, an investigative team that has accused some South Sudanese officials of corruption, urged the international community to keep up the pressure.

In Search of Zambia’s Stunning Wildlife: A Virtual Safari

With Most Coronavirus Cases in Africa, South Africa Locks Down

This Is Not Your Crazy Uncle’s XFL

Samsung Galaxy Z Flip could cost as low as $860

As the Virus Spreads, Face Mask Makers Go Into Overdrive

Our round-up of the best online courses to keep you busy...

In Search of Zambia’s Stunning Wildlife: A Virtual Safari