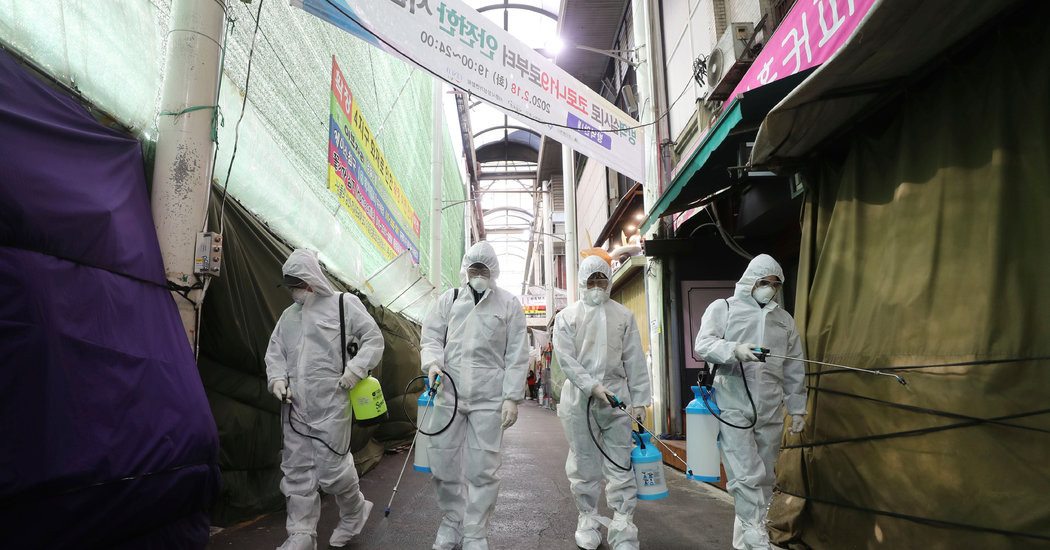 SEOUL, South Korea — As South Korea struggles to contain a snowballing coronavirus outbreak, the president on Sunday raised the country’s alert level to the highest in a decade by empowering the government to lock down cities, bar visitors from China and unilaterally restrict the movement of people.

In raising the alert level, President Moon Jae-in is effectively acknowledging that the virus is threatening to spin out of control, after the number of cases has jumped to 602 in a few days and the death toll has risen to six.

The world is closely watching South Korea, concerned that it has become another hot spot of infection outside China. Emerging outbreaks in South Korea, Iran and Italy have provoked fear that the epidemic could turn into a global pandemic, as countries impose more travel restrictions and containment measures.

The United States has raised its travel advisories for South Korea and Japan, warning about “sustained community spread.” Israel denied entry to 130 South Koreans on board a Korean Air flight that landed in Tel Aviv on Saturday, forcing them to return home on the same plane.

In recent days, the South Korean government has shut day care centers, banned outdoor rallies and postponed the reopening of schools in early March. Churches are asking congregants to stay home and pray online instead.

But Mr. Moon said South Korea faced a “wholly different situation” after the quickly expanding outbreak of the virus among members of a Shincheonji Church of Jesus in Daegu, South Korea’s fourth-largest city, 180 miles southeast of Seoul. More than half of all the patients in the country are either members of Shincheonji or their relatives and other contacts.

In Daegu, shopping districts, supermarkets and parks were empty as the government asked citizens to stay home.

On Sunday, South Korean officials said they had no immediate plan to bar Chinese visitors — as some conservative news outlets and other critics have demanded — or lock down any cities. But by putting the country on the highest alert, they showed their resolve to take more aggressive steps if needed.

This is the first time since 2009 that the country has been put on the highest alert; at that time, it was battling the swine flu spreading around the world.

“We should not be bound by regulations, nor should we shy away from unprecedented strong measures,” Mr. Moon said at an emergency government meeting on Sunday.

The alert, known as Level 4, will allow the government to allocate more money for fighting the virus and make it easier for health officials to acquire the personal data of people suspected of being infected, as well as outlaw religious and other gatherings.

It will also empower health officials to control air, train and other public traffic around the country.

Health officials hope that the number of new patients connected to Shincheonji will drop significantly within a week or so. They have already screened most members of the church showing potential symptoms, and many have been tested for the virus.

“We are faced with a watershed moment in the case of the coronavirus,” Mr. Moon said. “The coming few days will be a critical time for us. This will be a momentous time when the central government, local governments and the whole people must wage an all-out, concerted response to the problem.”

Until now, South Korean officials had been reluctant to raise the alert level, worried that such a drastic measure would hurt the country’s already slowing economy, as well as undermine its image as a country safe for travel. In China where the virus originated, the economy has come to a standstill, while the country has been essentially cut off from the rest of the world.

South Korea’s economic troubles have deepened in recent weeks, with exports to China, its biggest trading partner, sharply dropping because of the outbreak. South Korean auto and other companies that rely on parts from China have also suffered.

Despite its extensive ties with China, South Korea had initially appeared to cope well in containing the spread of the coronavirus. After reporting its first case on Jan. 20, the number of patients remained low. By Feb. 15, the country had 28 cases and no deaths.

A few days later, the situation began to unravel, when an infected patient was found in the large congregation of the Shincheonji Church in Daegu, a city of 2.4 million. Since then, the number of patients has exploded, mostly among members of Christian church and people connected to them.

For now, the outbreak has been largely limited to Daegu and the surrounding North Kyongsang Province, which account for 460 of the infections. But several new cases have emerged in towns across South Korea, most of them Shincheonji worshipers who have attended church services in Daegu or people who have traveled to the city or have met people from there.

“A large number of people gathered in a very closed space, holding their prayer services together for one to two hours,” said Jung Eun-kyeong, director of the Korea Centers for Disease Control and Prevention, referring to the Shincheonji church. “In such an environment, it was likely that even a few patients spread the disease to many people.”

Although health officials have frantically tried to track down church members and direct contacts, they acknowledged that it had become increasingly hard to establish the chain of transmissions once the community spread began. Shincheonji worshipers have been noted for their secrecy, often hiding their membership even to their parents, said former members and experts on religious sects.

In their efforts to contain the outbreak, officials have designated coronavirus-only hospitals and have required all people visiting regular hospitals with respiratory symptoms to be tested for the virus. With some towns fearing a lack of hospital beds, the government recently expedited the approval of newly built hospital wards so they could be quickly used to accommodate more patients.

Subway stations, coffee shops and movie theaters were all required to install hand sanitizers for customers to use. The government also empowered doctors to order a coronavirus test even if a patient doesn’t want it.

During a telephone call with President Xi Jinping of China on Thursday, President Moon sympathized with Beijing’s efforts to battle the virus, saying that “China’s difficulties are our own difficulties.”

More than 10,000 Chinese students are expected to return to South Korea in the coming week after winter vacations, as their South Korean universities are scheduled to reopen in early March. That has raised fears among some South Koreans.

On Sunday, officials said the Chinese students will be asked not to come to school for two weeks, officials said. The government also changed the opening day of kindergartens and high schools, to March 9, from March 2.

“We don’t agree with the argument that we are trying to catch mosquitoes while keeping the windows open,” Health Minister Park Neung-hoo said last week, dismissing the demand for a ban on Chinese visitors, as the United States and dozens of other countries have done. He said more people have been infected by South Koreans’ returning from China than by Chinese visitors.

The raising of the alert level came a day after thousands of older Christian activists dismissed his government’s appeals not to gather in large groups and pressed ahead with their weekly anti-government protest. They accused Mr. Moon of mismanaging the economy and being too friendly toward North Korea and China. At the protest, most of the participants wore masks but loudly chanted antigovernment slogans and “Amens.”

“We will defend South Korea even if we get infected with the virus and die,” said the Rev. Jun Kwang-hoon, who had organized the rally, shouted at the cheering crowd. “Those of you who are here are true Christians. Even if we contract the virus, the Lord will cure us.”

Apple reportedly releasing an iPad keyboard with a trackpad later this...

Twitter Confirms That It Won't Be Adding an Edit Option Anytime...

Is Apple about to announce a new iMac and Mac mini...

Valorant gets full launch on June 2nd, free to play with...

Peru’s Queen of Quechua Rap Fuses the Transgressive and Traditional

As Virus Tightens Grip on China, the Art World Feels the...