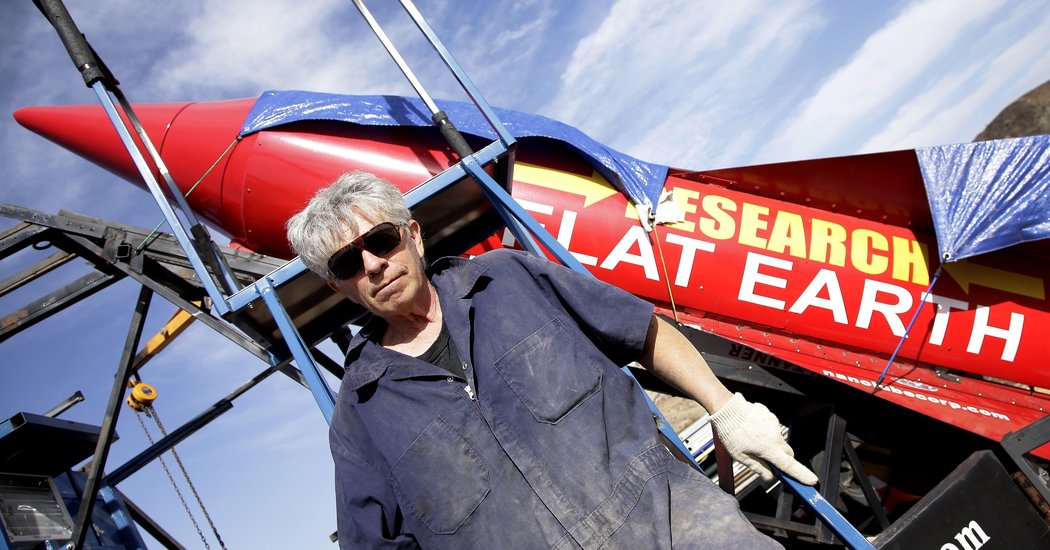 Mike Hughes, a go-it-alone daredevil, limousine stunt driver and self-taught astronaut who professed to believe that the Earth was flat and who was known to supporters as Mad Mike, died in a rocket launch in the California desert on Saturday. He was 64.

Darren Shuster, Mr. Hughes’s publicist, confirmed his death. Mr. Shuster, who was not at the launch on Saturday, said his client’s last message to him that morning asked, “Is the media going to be there?”

Around 2 p.m. on Saturday, San Bernardino County sheriff’s deputies were called to a rocket launch on private property in Barstow, Calif., about 120 miles northeast of Los Angeles. “A man was pronounced deceased after the rocket crashed in the open desert,” the sheriff’s office said in a statement.

A video of the launch posted by Justin Chapman, a freelance journalist, shows Mr. Hughes’s steam-powered rocket shooting off into the sky and a parachute falling down to the earth. Moments later, the rocket plummets and crashes near the launch site.

The launch was being filmed for “Homemade Astronauts,” a new television series for the Science Channel, which is owned by Discovery.

“Our thoughts and prayers go out to his family and friends during this difficult time,” Discovery wrote on its website. “It was always his dream to do this launch, and Science Channel was there to chronicle his journey.”

He is survived by two children.

The launch that killed Mr. Hughes was supposed to take him 5,000 feet into the air, Discovery said, calling it “only the first step towards an even more ambitious goal in space exploration.”

Mr. Hughes and Waldo Stakes, his longtime associate, dreamed of sending the brazen stuntman “62 miles into the air, clearing the Karman Line — the border between Earth’s atmosphere and outer space,” according to Discovery. Part of the men’s plan involved a “Rock-oon” — a combination rocket-balloon that Discovery said was “still being developed.”

In 2018, Mr. Hughes made headlines after he launched himself nearly 2,000 feet into the air before a hard landing in the Mojave Desert, The Associated Press reported.

Last year, the documentary “Rocketman” captured the “crew of dreamers” who work to launch Mr. Hughes “in a homemade rocket on a mission to prove that the Earth is flat.”

On Sunday, the documentary’s Instagram page dedicated a post to Mr. Hughes. “Although there were many things we disagreed on,” it said, “we found commonality in his perspective of the human condition.”

Calling him a “soft spirit” with “empathy for the world that contrasted with his public persona,” the post said that Mr. Hughes “was often lonely and felt his accomplishments as a daredevil had been forgotten.”

He once worked for NASCAR, was a self-taught rocket scientist and earned a Guinness World Record, in 2002, for longest ramp jump in a limousine, but Mr. Hughes’s legacy may be dominated by his purported belief in a flat Earth.

The A.P. once quoted Mr. Hughes as saying that he believed the Earth was shaped like a Frisbee, but he also conceded that he couldn’t say for certain that it was.

Alluding to that legacy, the “Rocketman” Instagram tribute said that “right now, many are laughing at Mad Mike,” but that “no one laughed harder at Mad Mike Hughes, than himself.”

Mr. Hughes “didn’t really care if the Earth was flat, and was fully ready to concede his error once he could see it with his own eyes in a final stunt that he was working towards,” the post read.

Mr. Shuster, his publicist, maintained that Mr. Hughes’s professed flat-Earth beliefs were simply intended to garner money and publicity for his stunts.

“He was eccentric and believed in some government conspiracies, for sure, but it was a P.R. stunt,” Mr. Shuster said. Above all, he said, Mr. Hughes’s goal was to be an inspiration for all Americans.

Should we be cleaning our houses and workspaces differently now that coronavirus is here?

House Hunting in France: A Self-Sufficient Home for $350,000

Life Inside an Afghan Women’s Prison

How to See the World When You’re Stuck at Home

Stanley Cohen, Nobelist, Dies at 97; Made Breakthrough on Cell Growth