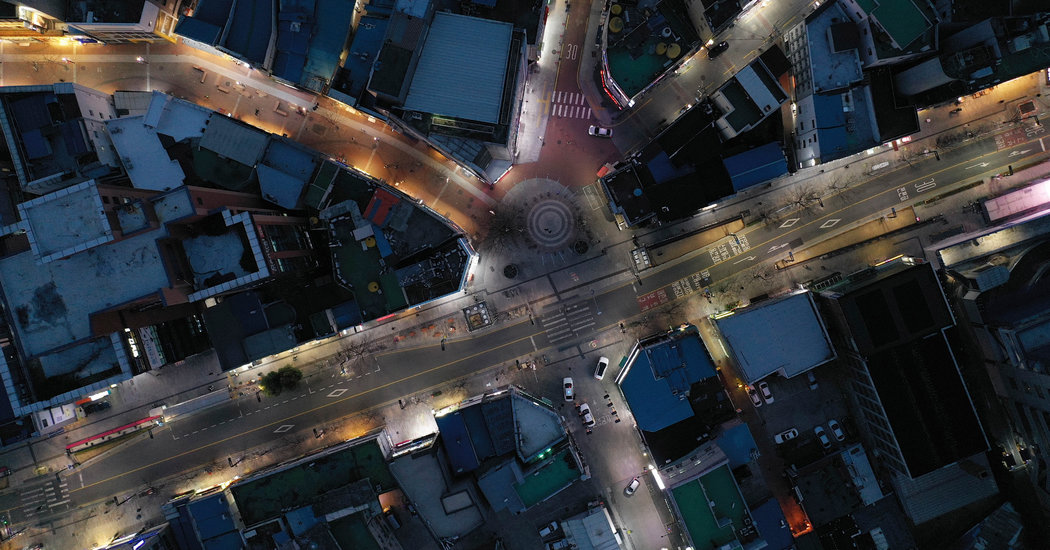 DAEGU, South Korea — The usually crowded shopping and partying district in this city of 2.4 million is quieter these days after officials urged citizens to stay home to contain an explosive outbreak of the coronavirus. But many restaurants and bars remain open, waiting for customers who seldom come.

A noodle restaurant put out the sign: “Please come in! We thoroughly disinfect this place twice a day.” In a Starbucks outlet, four workers in surgical masks chanted a cheerful “welcome” when a visitor stepped in. Usually jam-packed with young people, there wasn’t a single customer inside.

Daegu, the center of South Korea’s ballooning coronavirus outbreak, is trying a less rigid approach to keep the health threat at bay: aggressively warning residents to take precautions while staying open for business. It is a stark contrast to the strict lockdown in Wuhan, China, where government restrictions on movement have barricaded most of the city’s 11 million residents in their homes.

“People have been scared and don’t want to venture out,” said Park Seon-gyu, 58, a taxi driver, pointing at roads where the traffic has considerably thinned since the city’s first case of the coronavirus was reported a week ago. “But life has to go on. I have to hit the road to make my hand-to-mouth living.”

If it works to contain the crisis, the strategy — aggressively monitoring for infections while keeping the city running — could be a template for more democratically inclined societies as the virus spreads worldwide, testing civil liberties.

The approach reflects the different politics and challenges in South Korea, a place where raucous weekend demonstrations are common in the capital and the last leader was thrown out of office after being consumed by scandal. When ruling-party lawmakers recently hinted at a lockdown of Daegu and nearby areas, they faced serious blowback from local conservative politicians.

President Moon Jae-in visited Daegu on Tuesday after the government moved quickly and early to confront the crisis. In China, the top leader, Xi Jinping, stayed largely out of public view in the early days of the outbreak and doctors were silenced for warning about the threat.

By Tuesday afternoon, South Korea had reported 977 coronavirus cases, making its outbreak the largest outside China. Of that total, 543 are Daegu residents. Roughly half the cases involve members of the Shincheonji church, whose branch in the city is believed to be the source of the rapid-fire spread through South Korea.

Daegu is now an eerily quiet city, a metropolis stalked by an invisible enemy.

At its main train station, officials monitored the body temperature of every departing or incoming passenger with heat-detecting cameras. Cleaners sprayed every corner of the station with liquid antiseptic.

Rather than locking down entire cities, as China has done, South Korea has neither forcibly controlled the movement of people ​in affected towns like Daegu ​nor banned visitors from China.

Daegu’s mail deliverers still weave through its alleyways, rushing up the stairs with packages. Seomun Market, the city’s largest, reopened on Monday after a day of disinfection. Most of its hundreds of little shops ​were still closed, with their stalls covered with olive-green plastic covers​, but some displayed their inexpensive shoes and clothes. ​

Daegu’s mayor, Kwon Young-jin, said his goal was to test all citizens with potential symptoms within the next month, opening temporary monitoring stations across the city, ​borrowing medical staff from the outside and securing hospital beds in nearby towns.

Outside Daegu’s Keimyung University Dongsan Hospital, which has been designated for treating coronavirus patients, ambulances stood in line while workers fully covered in ​white ​protective gear sprayed the vehicles with disinfectants.

Other hospitals in Daegu were ordered to quarantine themselves to protect their patients after a devastating outbreak in the nearby town of Cheongdo, where 100 hospital patients were infected with the virus, including seven who died.

Some workers seized on the public’s wariness about going outside to make money. F​ood deliverymen ​raced through Daegu’s neighborhoods on motorbikes, ​delivering meals to families who now eat only at home. Restaurants and coffee shops quickly migrated to smartphone home-delivery apps to stay in business.

Even in the residential area ​behind the Shincheonji church, the center of the ​outbreak, workers from a local internet service provider visited homes door to door, plastering their gates with advertisements for high-speed connections.

“We don’t intend to lock the region down as China did with Wuhan,” said Kim Gang-lip, South Korea’s vice health minister. ​

Around ​Daegu, things have clearly slowed down, but not to a complete stop.

“I have hesitated to come out, eating at home as much as possible, ordering home-delivery food,” said Park Hae-il, 24, a university student, who strolled in the largely empty alleys of the shopping district of Dongseong-ro with a friend, both wearing face masks.

“My gym has been closed and I have canceled all parties with friends since Feb. 18,” he added. “​Friends who fled Daegu for their hometowns outside call me to see if it’s OK to come and return, and I tell them that it’s better to stay out.”

But Mr. Park said he saw people hoarding instant noodles in supermarkets. He stood in line for an hour to get a pack of 30 facial masks, the most the shop could sell to an individual.

All Daegu’s public libraries, museums, ​churches, ​day-care centers and courts have been closed. The city ordered all schools — from kindergartens to colleges — to postpone their March reopenings. It discouraged serving food at weddings and funerals.

Subway cars carry half their usual passengers, with riders all wearing masks and sitting apart as an intercom urges them to call a coronavirus hotline if they feel ill.

When night fell on Monday, the city turned much quieter and darker, with shops closing earlier than usual.

“The virus crept on us without making a sound and delivered us a shocker,” said Ryu Ho-sang, 63, a retiree, who sat in a park dotted by apricot blossoms. He faulted President Moon Jae-in for not locking down Daegu a week ago to contain the virus’s spread.

But even without such a draconian step, Daegu itself has already become something of a national pariah​.

Large hospitals in Seoul are refusing to accept outpatients from Daegu. Domestic airlines and bus companies have cut trips to the city, citing a drop in demand.

“My cousin in Seoul said I don’t need to come to her son’s wedding,” Mr. Park, the taxi driver​, said with a chuckle​. “She said it politely but I knew what she meant: she didn’t want to invite any virus from Daegu.”

But Daegu’s citizens have also started to haltingly return to their normal lives.

Kim Hee-sook, 78, had not left her home for five days, fearful of the virus she “can’t see, smell or touch.” On Monday, she finally ventured out for some sun.

“I got sick of staying indoors all day, watching TV,” she said. “Because of the lack of exercise, I lost my appetite and developed indigestion and insomnia. If I stayed home any ​longer, I thought I would die of insomnia” instead of the virus.

Many of Daegu’s citizens have turned their anger toward the Shincheonji church, which mainstream churches have long branded as a cult for their unorthodox interpretations of the Bible. In the past few days, health officials have been struggling to locate hundreds of church members who remained incommunicado.

“I don’t care whether they are a cult or not,” said Park Ji-hyok, 25, a college student. “What makes me angry is that many church members have gone into hiding, rather than cooperating with the government” in curtailing the spread of the virus.

The local branch of the Shincheonji church, nestled in a 10-story building​ near a subway station​ that used to house a fitness center, remained closed. On its front wall, a large banner called ​Shincheonji “a beautiful church that will continue to spread the love and truth.”

Around the church, coffee shops, restaurants and even a bank, 7-Eleven and Burger King were closed, citing the virus. But a post office and a pet shop stayed open​.

Even before the outbreak, the church was called a nuisance for its neighbors. Some put out signs warning church members against using their private parking spaces when they congregated in large numbers.

“They were so loud when they prayed and sang together,” said Cho Sook-ja, 62, who lived in an apartment behind the church and blamed it for the current disruption in his life. “Since the outbreak​, I have lost much of my private life, unable to go ​out ​to markets, public bath house and hair salon. The boss in my building company asked me not to come to work until March 8.”

In Thailand, Students Take on the Military (and ‘Death Eaters’)

Despite Rising Tensions, Iran and U.S. Are Negotiating a Prisoner Release

Microsoft’s Surface Duo may not have great battery life

Iranian Civilian Jet in Near-Miss With American Warplane in Syria

Wyze Band with Alexa will track your fitness and control your...