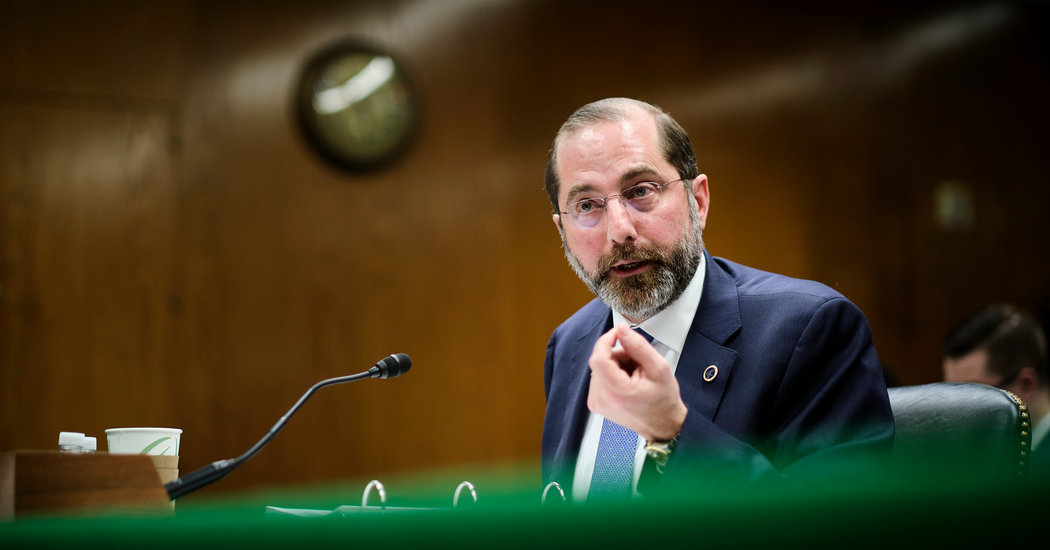 Federal health officials starkly warned on Tuesday that the new coronavirus will almost certainly spread in the United States, and that hospitals, businesses and schools should begin making preparations.

She said that cities and towns should plan for “social distancing measures,” like dividing school classes into smaller groups of students or closing schools altogether. Meetings and conferences may have to be canceled, she said. Businesses should arrange for employees to work from home.

“We are asking the American public to work with us to prepare, in the expectation that this could be bad,” Dr. Messonnier said.

Shortly after the news conference, stock markets plummeted for the second day as investors dumped stocks and turned to the safety of government bonds. The S&P 500 fell by more than 3 percent, following a 3.4 percent slide on Monday — the worst day for the American markets since February 2018.

In contrast to his own health officials, President Trump, traveling in India, played down the threat, saying, “You may ask about the coronavirus, which is very well under control in our country.”

As of Tuesday, the United States has just 57 cases, 40 of them connected to the Diamond Princess, the cruise ship overwhelmed by the coronavirus after it docked in Japan. Those patients are in isolation in hospitals, and there are no signs of sustained transmission in American communities.

But given the outbreaks in more than two dozen countries, officials at the C.D.C. seemed convinced that the virus’s spread in the United States was inevitable, although they did not know whether the impact would be mild or severe.

“We cannot hermetically seal off the United States to a virus,” Alex M. Azar II, the secretary of health and human services, told a Senate panel on Tuesday. “And we need to be realistic about that.”

Globally, public health officials are confronting a multipronged threat. China’s battle to contain the epidemic has shown signs of success, with a plunge in the rate of new infections.

But this has been overshadowed by new clusters of infections in Iran, South Korea and Italy. The emergence of these new hubs underscored the lack of a coordinated global strategy to combat the coronavirus, which has infected more than 80,000 people in 37 countries, causing more than 2,600 deaths.

By Tuesday, South Korea had reported a total of 893 cases, the second most in the world. The C.D.C. on Monday warned Americans not to travel there.

Of the 60 new cases reported by South Korea’s federal health agency, 49 came from Daegu, the city at the center of the country’s outbreak.

In Iran, a spike in coronavirus infections — including to the top health official in charge of fighting the disease — has prompted fears the contagion may spread throughout the Middle East. In Italy, one of Europe’s largest economies, officials are struggling to prevent the epidemic from paralyzing the commercial center of Milan.

Keenly aware that the virus has the potential to wreak havoc in the United States, lawmakers from both the Democratic and the Republican parties grilled Mr. Azar and other members of the administration at the Senate hearing, apparently unconvinced that the Trump administration was prepared for the outbreak that the C.D.C. is forecasting.

Senator John Kennedy, Republican of Louisiana, grew exasperated when the acting secretary of the Department of Homeland Security, Chad F. Wolf, could not say how many people were expected to become infected.

“I’m all for committees and task forces, but you’re the secretary,” Mr. Kennedy responded. “I think you ought to know that answer.”

The administration officials overseeing the response to a coronavirus outbreak told lawmakers that the initial funding requested by the White House — $1.25 billion in new funds and $1.25 billion taken from other programs — would most likely be just a first round.

Mr. Azar said that there were 30 million N95 masks, respirators best suited to guarding against viruses that typically cost less than $1 apiece, in the nation’s emergency stockpile.

Senator Patty Murray, Democrat of Washington, asked the health secretary whether he thought the United States currently had enough health masks in stock.

“Of course not,” he responded, “or else we wouldn’t be asking for more.” Health care workers may need 300 million masks in the event of an outbreak, he added.

Mr. Azar said he was alarmed by the human-to-human transmission of the virus in other parts of the world without an identifiable connection to confirmed cases, and what that could mean for how the virus may spread in the United States.

But other federal health officials were trying to tamp down concerns.

“You need to do nothing different than you’re already doing,” Dr. Anthony Fauci, the director of the National Institute of Allergy and Infectious Diseases, said at a news briefing.

Federal officials were only trying to tell Americans that if an outbreak occurs, he added, “these are the kinds of things you want to think of.”

Larry Kudlow, director of the National Economic Council, declared on CNBC that the coronavirus had been “contained” and would not do serious harm to the economy.

“I don’t think it’s going to be an economic tragedy at all,” Mr. Kudlow said.

Preparations to respond to a potential outbreak have begun, government officials said, but are far from complete.

It still is difficult to diagnose the infection. The C.D.C. performs most of the testing, and samples must be sent from state and local laboratories to the agency in Atlanta, a process that takes days.

The C.D.C. had manufactured diagnostic kits to be used by state and local labs, but the kits turned out to be flawed. Replacements have not yet been distributed.

While the nation’s hospitals have had to handle only a few dozen cases to date, many are ramping up efforts to prepare for a widespread outbreak.

Hospital officials were assuming the efforts to contain the virus would delay, not prevent, a pandemic — sustained transmission of the coronavirus on more than one continent.

“We are really staging it, from a minor issue of small numbers of patients, to a full-blown community spread,” said Dr. Mark Jarrett, the chief quality officer at Northwell Health, which operates 23 hospitals on Long Island and elsewhere in New York.

Hospital administrators nationwide anticipate a wave of patients that could strain their intensive care units and isolation rooms. Many are starting to conserve medical supplies, including specialized masks and ventilators.

“It is a special concern that there is a shortage, a worldwide shortage, of personal protective equipment,” said Nancy Foster, a vice president of the American Hospital Association.

Many hospitals say they are also planning to treat as many patients outside their facilities, using telemedicine to care for people with mild symptoms at home.

“We have surge plans to go broader and broader — and if it gets broader, tents,” said Dr. Susan Huang, medical director of infection prevention at the University of California, Irvine Health System. “The hope for containment is rapidly fading.”

The epidemic in China also has threatened supplies of some drugs and medical devices that hospitals rely on.

The Food and Drug Administration has been monitoring supplies of about 20 important drugs that are manufactured in China or depend on ingredients made only there, including such common drugs as aspirin, ibuprofen and penicillin.

Chinese factories are slowly reopening, officials said, although transportation remains a challenge because truck drivers face quarantines or are not allowed into certain cities.

Despite the early hospital preparations, there is no vaccine or treatment for the coronavirus, and communities and individuals should prepare other means of protecting themselves.

Individually, people can take the measures recommended for other infectious diseases, like washing their hands, covering their mouths when they cough, and staying home and away from others when they are sick.

The World Health Organization said that the pace of confirmed new cases in China, which exceeded 2,000 a day a month ago, had dropped steadily, to a low of 508 on Monday.

The severe measures imposed by the Chinese authorities to isolate patients and the hardest-hit areas had likely prevented hundreds of thousands of additional infections, the W.H.O. officials added.

But W.H.O. officials have also warned that the world is unprepared for a leap in infections, which could overwhelm medical resources in many countries. They also cautioned that new cases could suddenly resurge in China, as the government struggles to get people back to work.

And there are persistent doubts about the accuracy of infection figures reported by the Chinese government, raising the possibility that the true magnitude of the outbreak remains underreported.

Workouts at home: The techy way to keep fit during lockdown

Champions League and Euro 2020 in Jeopardy as Teams Enter Quarantine

Willie Davis, Hall of Fame Defensive End, Is Dead at 85