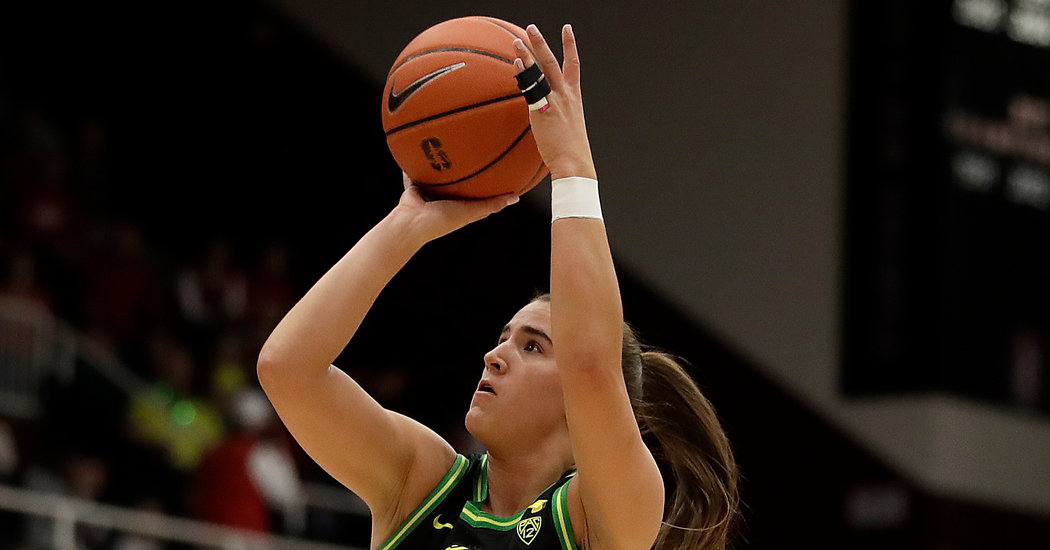 STANFORD, Calif. — Sabrina Ionescu’s strength inspired her Oregon coaches and teammates all day, from the way she courageously spoke at the memorial service for Kobe Bryant in Los Angeles earlier in the day, then flew back to the Bay Area and took the court shortly after vomiting in the locker room, all before leading the Ducks with yet another brilliant performance on both ends.

And doing something never done before in college basketball, by a man or a woman.

Ionescu wasn’t made available to the news media for a second straight game, speaking to ESPN on Monday.

“That one was for him. To do it on 2-24-20 was huge,” she told the network. “We talked about it in the preseason. I can’t put it into words. He’s looking down and proud of me and happy for this moment with my team.”

Ionescu hit the milestone on a defensive rebound with 1:47 remaining in the third quarter and finished with 21 points, 12 assists and 12 rebounds in her first triple-double against a top-10 opponent and eighth overall this season to help Oregon (26-2, 15-1 Pac-12) clinch at least a share of its third straight Pac-12 regular-season title.

“Incredible. I thought she was so poised and so heartfelt today,” said Coach Kelly Graves, whose wife, Mary, accompanied Ionescu. “At her age and relative limited experience and things like that, I just thought she nailed it. It was amazing, and she wrote that, and that was from her. She’s pretty special in more ways that just what you’re seeing on the court.”

Ionescu also had a triple-double Friday night at California while playing near her East Bay hometown of Walnut Creek, then delivered her eighth career road triple-double for the Ducks on an emotional day just hours after attending the service for Bryant and daughter, Gianna, in Southern California.

“I don’t know many people that could have done what she did today,” Graves said. “I knew this was the way it was going to end tonight for her. I’m glad that it ended in a victory but I knew that she was going to get that. It’s so fitting that she did it tonight.”

“She’s a player. I didn’t expect anything different than what we saw,” VanDerveer said.

She now has 2,467, 1,041 assists and 1,003 rebounds, helping Oregon secure Monday at least 15 conference wins for a third consecutive season. Ionescu shot 9 for 19, missing her three 3-point attempts. She had plenty of help from Satou Sabally, who scored 27 points on 10-for-17 shooting with four 3-pointers.

“When she came back, we were there for her. It wasn’t the easiest day but she always has our backs so it was our turn to have her back,” Sabally said. “We just lifted her up.”

Golden State Warriors star Stephen Curry sat on the baseline supporting Ionescu and women’s basketball for the second straight game she played in Northern California after he was in Berkeley with his two daughters Friday night. He watched Oregon run its winning streak to 14 in a row and nine straight on the road.

“You kind of try and hide some of those emotions. To speak was such an honor for me,” Ionescu said. “I tried to do everything I could to hold it together tonight and my team helped me do that.”

The Cardinal had their four-game winning streak snapped with just a second defeat at Maples Pavilion this season.

Oregon jumped out to a 25-10 lead then led 32-22 at halftime after four turnovers late in the second quarter allowed Stanford to stay close.

“I think they’re the No. 1 team in the country. They have all the weapons,” VanDerveer said. “They’ve got great experience. Kelly does a fantastic job with them in terms of they know what they’re doing out there. They’re a very well coached team, they’re a very skilled team. I was disappointed that we honestly didn’t give them a better game.”

Ionescu’s left sneaker had “Mamba Mentality” written on it along with “Forever 24” as well as a “24” on the back.

Curry also attended the service for Bryant and his daughter Gianna.

“I can’t imagine how emotional it was for everyone in that arena. To be at her age with all that she’s got going on and her connection to Kobe and Gigi and to give a speech in front of 19,000 people all mourning was unbelievable,” Curry told ESPN. “She spoke so well. Now she’s out here representing them playing her heart out.

“That’s sustained greatness. She came back her senior year for a reason to get the national championship. She’s blazing a trail no one has stepped foot in.”

Tom Hanks Got Sick in Australia, Where Coronavirus Testing Isn’t Such...

Total Recall Director Thought The Three-Breasted Woman Could Have Had Even...

‘I’d Rather Stay Home and Die’

Laid Off and Locked Up: Virus Traps Domestic Workers in Arab...