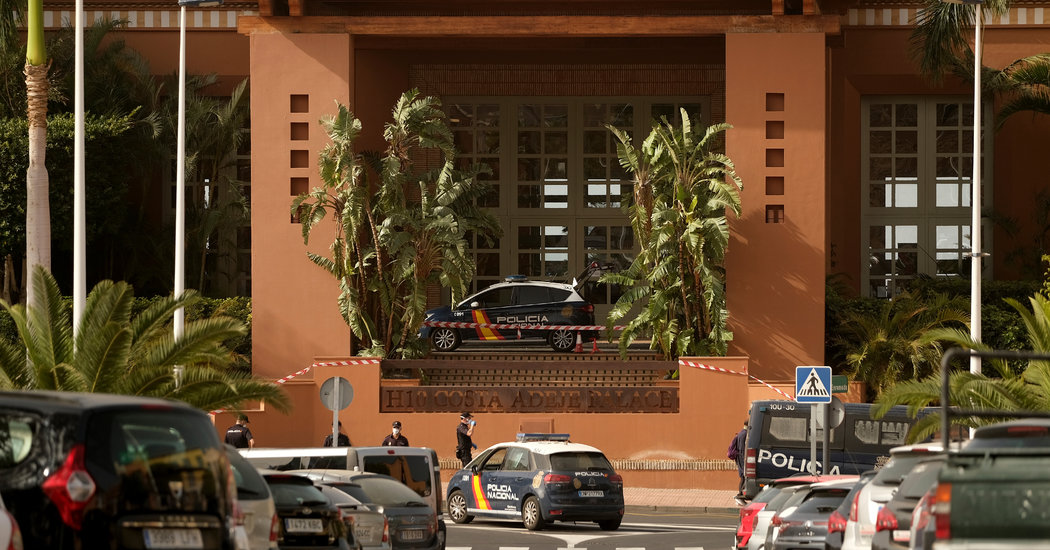 MADRID — The Spanish authorities scrambled on Tuesday to trace everyone who had come in contact with an Italian doctor and his partner who tested positive for the coronavirus while on vacation in the Canary Islands, locking down a major resort with about 1,000 guests in the hopes of limiting any possible outbreak.

While officials said they were acting out of an abundance of caution, the response underscored how quickly the spread of the virus in one European Union nation could become a problem for others in the bloc, which prides itself on frictionless travel across borders.

The doctor had been visiting from the Lombardy region of Italy, local news reports said, which has been hit particularly hard by the virus. Cases that appear connected to Lombardy were also reported on Tuesday in France, Austria, Croatia and Switzerland.

In another Lombardy link, the Spanish authorities said Tuesday that a 36-year-old Italian woman living in Barcelona had also tested positive for the virus after returning from the region. Joan Guix, a Catalan regional official, said that the authorities had identified about 25 people who had been in contact with the woman and that they would remain “isolated” for 14 days.

The Canary Islands resort, the H10 Costa Adeje Palace in Tenerife, was not placed under quarantine, which involves separation of those who have been exposed to the virus, the authorities said. Rather, they said, it was in lockdown for now, which aims to halt the movement of all individuals within the concerned area — regardless of whether they are sick or have been exposed.

The Canary Islands, an archipelago about 60 miles west of the African coast, are a popular destination for Europeans.

The doctor had been on Tenerife for a week before he fell ill with a fever and checked in at a local hospital, where he tested positive for the virus on Monday night. He was then placed in an isolation ward. His partner, who was traveling with him, tested positive on Tuesday, health officials said.

The Spanish authorities said that more tests were being done in Madrid to confirm the diagnosis, and they ordered guests at the hotel not to leave until they were complete.

In other quarantines for the coronavirus around the world, the standard practice has been to isolate for 14 days those who have possibly been exposed.

Outside China — where the scale of the epidemic still far outpaces the rest of the world and where whole cities have been locked down over the past two months — quarantines have proved an effective measure to at least slow the spread of the virus.

However, when the passengers of a cruise ship, the Diamond Princess, were forced to stay onboard for weeks after it docked in Yokohama, Japan, the lockdown led to widespread transmission, with more than 690 people contracting the disease, making it the largest concentration of coronavirus cases outside China.

For the guests at the H10 Costa Adeje Palace, on the southern end of Tenerife, it would be hard to imagine how their vacation could get worse. As well as the infection fears, a storm swept sands from the Sahara over the Canary Islands over the weekend, forcing airports to close and stranding thousands of tourists.

As the sands dissipated and the orange haze lifted from the skies, guests at the resort awoke to another unwelcome surprise: a note slipped under their doors from the management, telling them to stay in their rooms for health reasons.

The police cordoned off the hotel and later on Tuesday morning, officers also blocked access to nearby streets and a parking lot. Video from inside the resort showed guests milling about, some wearing face masks, as crowds gathered outside the complex seeking information.

Chris Betts, a Briton, posted a video on Twitter that suggested guests were not exactly confined to their quarters.

“We had breakfast normally,” he said. “The hotel seems to be acting normally, except we cannot go out.”

The hotel blockade was intended to allow health inspectors to check individuals who could have come in contact with the Italians, according to local news reports.

Emergency government meetings were held Tuesday in the Canary Islands and in Madrid. Even so, officials sought to reassure people planning trips to Spain, one of the world’s most popular tourism destinations, that the situation was under control.

“Spain is a safe country at the moment and visitors have no reason to delay their visit to our country,” María Reyes Maroto, Spain’s tourism and industry minister, told reporters.

The lockdown of the hotel in Tenerife demonstrates “the seriousness with which this issue is being handled,” Mr. Illa said. If hotel guests are checked and do not show symptoms, he said, “they will be free to do whatever they want to do.”

Britain Plans Incentives to Bring Its Workers Back

A Good Death Is a Rite of Irish Life. Amid Coronavirus,...

When the Soldiers Meant to Protect You Instead Come to Kill

Giuliani Sought Help for Client in Meeting With Ukrainian Official

Iron Man dreams are closer to becoming a reality thanks to...

Celebrating the Great Australian Tradition of Meat in a Box

Olympus now lets you use some of its mirrorless cameras as...

A Leak, a Resignation and Another Chance: Ukraine Infighting Grows