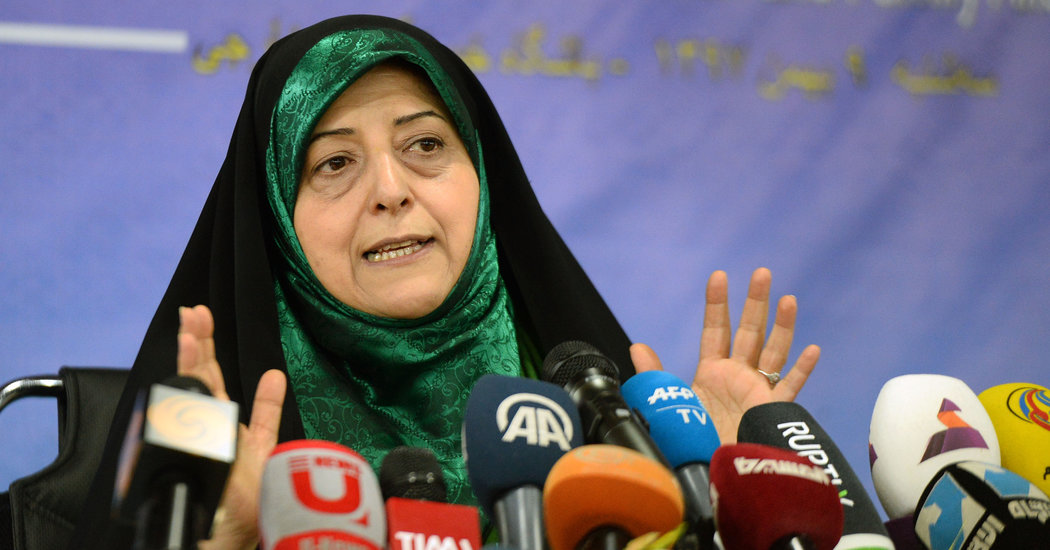 A senior figure in Iran’s government, who sits just a few seats away from President Hassan Rouhani at cabinet meetings, has fallen ill with coronavirus, making her Iran’s seventh official to test positive, including one prominent cleric who has died.

Vice President Masoumeh Ebtekar, Mr. Rouhani’s deputy for women’s affairs and the highest-ranking woman in the government, has a confirmed coronavirus infection and is quarantined at home, her deputy said Thursday.

The disclosure came a day after a cabinet meeting in which she was in close contact with other government leaders, including Mr. Rouhani. A photo posted by a BBC Persia reporter on Twitter showed she had been sitting a few yards from the president.

Ms. Ebtekar, one of four vice presidents, was known to Americans as “Mary” during the Tehran hostage crisis four decades ago, when, as a young revolutionary, she was a spokeswoman for the captors of the 52 Americans held at the United States Embassy.

Iran now appears to have the highest number of government officials infected by the coronavirus, which was first officially reported in the holy Iranian city of Qom on Feb. 19. The disease is believed to have spread to the country from China, which has maintained close economic relations with the Tehran government despite American sanctions.

A regional crossroads, Iran also appears to be a primary source of the infections that have spread to neighbors.

At least 245 people have been infected in Iran, with 26 deaths, Health Ministry officials said Thursday, most of them in Qom, a destination for Shiite pilgrims.

But health experts estimate the number of infections is far higher, possibly over a thousand, because the country’s fatality rate of about 20 percent seems so high. The World Health Organization has said the fatality rate is about 2 percent.

Cases surfacing in recent days in Bahrain, Lebanon, Afghanistan, Oman, Iraq, the United Arab Emirates, Pakistan and Kuwait all have afflicted people who had visited Iran. There were unconfirmed reports Thursday that Austria’s foreign minister, Alexander Schallenberg, was being tested for a coronavirus infection after returning home from Iran and showing symptoms.

Besides Ms. Ebtekar, the other Iranian officials infected include: Mojtaba Zolnour, a member of Parliament from Qom and head of Parliament’s national security and foreign policy committee; Mahmoud Sadeghi, an outspoken member of Parliament from Tehran; Iraj Harirchi, the deputy health minister who had been leading the effort to contain the coronavirus; Morteza Rahmanzadeh, the mayor of a Tehran district; Dr. Mohamad Reza Ghadir, head of coronavirus management in Qom and director of the city’s state medical university, and Hadi Khosroshahi, a prominent cleric and former ambassador to the Vatican.

Despite earlier claims by the Iranian authorities that the coronavirus risk is under control and that its extent has been exaggerated by enemy propaganda to sow panic, they canceled Friday Prayers in Tehran and 22 other cities, and ordered schools and universities closed until the end of the Iranian year on March 21. All cultural and sports events will remain shut down for another week, the Ministry of Culture said.

A Foreign Ministry spokesman, Seyed Abbas Mousavi, said Iran would receive 20,000 coronavirus test kits from China on Friday, transported via Mahan Air, an Iranian carrier that is still flying between China and Iran.

And a Health Ministry spokesman, Kianoush Jahanpur, said the number of laboratories testing for coronavirus had increased to seven from two, and would total 22 by the end of next week. “This level of laboratory capacity is unique compared to similar on par countries, and it will suffice our needs,” he said in a social media posting.

In a further sign that the authorities are taking the contagion threat more seriously, Iranian state media reported that Iran’s supreme leader, Ayatollah Ali Khamenei, had met with top medical officials on Thursday, wished them success in this “difficult and momentous task,” and expressed hope that “the malicious virus will be uprooted as soon as possible.”

Ali Ebrazeh, a deputy health official in Qom, said the city was prepared to create a field hospital and that the Islamic Revolutionary Guards Corps and army would erect hospitals there if the number of patients increases.

“If health precautions are not followed in Qom, we will end up needing 2-3,000 more hospital beds,” Mr. Ebrazeh was quoted by BBC Persia as saying.

The coronavirus hit Iran as the country of 80 million is suffering its most serious economic problems in many years, at least partly attributable to American sanctions that have choked Iran’s ability to sell oil and conduct international banking.

The mixed messaging from the Iranian government on the coronavirus could further worsen its credibility problems inside the country, where anger has simmered over a deadly crackdown on economic protests in November and an attempt to cover up the accidental downing of Ukrainian jetliner last month in Tehran.

“The government appears unable to grasp the scope or severity of the coronavirus outbreak,” the Eurasia Group, a political risk consultancy, said in an emailed advisory to clients this week.

The advisory, written by Henry Rome, the group’s Iran specialist, and Scott Rosenstein, its global health adviser, said Mr. Khamenei and his subordinates “are probably unwilling to take decisive steps that could unsettle a population already under extreme pressure from U.S. sanctions.”

Made in India: The Sartorialist&apos;s portrait of a country&apos;s unique style...

Wow, John Wick’s Directors Had To Fight For One Of The...

With Most Coronavirus Cases in Africa, South Africa Locks Down

10 Behind-The-Scenes Facts You Might Not Know About Alita: Battle Angel

8 Americans Were Hurt in Iranian Strike, Military Says, Despite Trump...

Israel Faces a Defining Question: How Much Democracy Should Arabs Get?