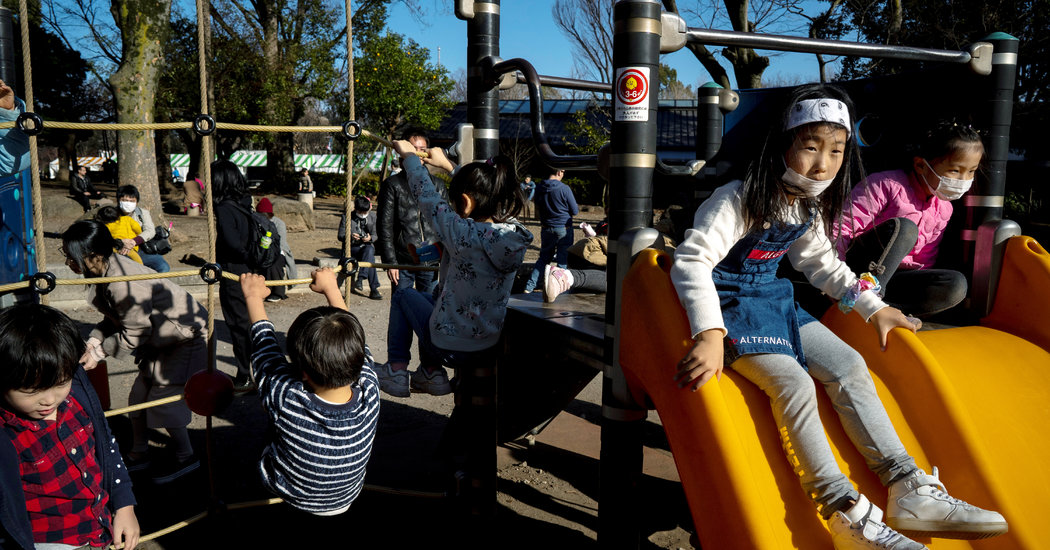 TOKYO — After weeks of criticism that Japan was bungling its reaction to the spread of the coronavirus, Prime Minister Shinzo Abe took the drastic step on Thursday of asking all the country’s schools to close for about a month.

With the number of cases steadily rising and Japan suddenly confronting talk that the Tokyo Olympics may have to be canceled, Mr. Abe is eager to show that he is moving aggressively to control the virus.

The move to shut schools, which would make Japan one of a few countries, including China, to suspend classes nationwide, appeared to be an abrupt reversal of the more cautious stance the administration had taken on the virus.

Japan, unlike neighboring South Korea and other countries, has not experienced a sharp increase in reported infections. It has had 210 cases, including four deaths. There have also been more than 700 cases and four deaths from the Diamond Princess cruise ship, which spent two weeks quarantined while docked in Yokohama.

But global alarm — and attendant questions about the Olympics — has grown as the virus has spread more rapidly outside China. Mr. Abe’s actions began to reflect that concern on Wednesday, when he requested that large sports and cultural events be postponed or canceled in the coming weeks, a day after saying that such a move was unnecessary.

As he announced the school closings on Thursday, Mr. Abe said he was “putting a priority on children’s health and safety” and trying to pre-empt the risk of widespread outbreaks that could result “from gatherings of many children and teachers for a long time on a daily basis.”

Speaking before a coronavirus task force meeting, the prime minister said that elementary, middle and high schools should remain closed through spring break. The Japanese school year ends in March, and the new year usually starts at the beginning of April. He did not mention universities or day care centers.

“It seems really extreme and really sudden,” said Chelsea Szendi Schieder, an associate professor of economics at Aoyama Gakuin University in Tokyo. “And the implications for people and their daily lives is going to be so big that I’m not sure it’s worth it in terms of public health.”

Kentaro Iwata, an infectious-disease specialist at Kobe University who had criticized the government’s response to the coronavirus outbreak on the Diamond Princess, said school closings were not medically warranted.

“I don’t understand this,” Dr. Iwata said. “Primarily, children are not easily infected with coronavirus, and even if they are infected, they don’t easily fall seriously ill.”

Analysts said political calculations might have weighed more heavily than science, particularly with the Olympics scheduled to begin in July.

“The Olympics have cast a shadow over the government’s response this whole time,” said Tobias Harris, an expert on Japanese politics at Teneo Intelligence in Washington.

“Early on, the response was a little timid and reactive for fear of alienating international visitors,” he said, “and now they’re belatedly realizing that unless they can somehow stop this or contain it that the chances of cancellation seem to be growing by the day.”

Mr. Harris added that the move was “a starting gun” for the sort of panic buying and stockpiling that has occurred in places like Hong Kong.

Parents took to social media to express anxiety about what the school closings would mean for working families — a challenge that Hong Kong parents have been dealing with for weeks as classes have been conducted online, as they have also been in mainland China.

“As someone who grew up in a single-parent family, I hope the government and companies will take relief measures or compensate single parents, two-income families and other families who might face difficulties due to their jobs,” one commenter wrote on Twitter. “I’m about to puke just thinking about it.”

Toshihito Kumagai, the mayor of Chiba, east of Tokyo, said on Twitter that he was shocked by the news and concerned about how parents who work as doctors, social workers, police officers and firefighters would cope.

“Society could collapse,” he warned. He also questioned the move’s effectiveness as parents continue to gather in places like crowded trains.

While some companies have instituted teleworking policies to try to prevent outbreaks, Japan has long resisted allowing people to work from home. And even those who can do so will struggle to combine work with child care.

“I, myself, we have two elementary school children. My wife also works, so we’re talking if we should send them to our parents in Hiroshima,” said Hajime Kawaguchi, a lawyer in Nagoya with expertise in crisis management.

“I also had a call from a single father who works at the Toyota factory with two children,” Mr. Kawaguchi added. “He cannot take time off. He was wondering what to do next week.”

While shutting schools when the case tally in Japan is still not much more than 200 struck some as an overreaction, experts have noted that the country’s somewhat restrained response to the virus so far has meant that it has not yet tested many people. The true number of coronavirus cases in Japan could be much higher.

“Managing a crisis and developing sound policies depends on knowing the scale of the problem,” said Jeff Kingston, the director of Asian studies at Temple University in Tokyo. “This is more like how authoritarian regimes handle problems, so Abe is still failing this test of his leadership.”

The Japanese government has acute memories of how it was faulted for its slow response to a previous crisis: the nuclear disaster in Fukushima after the earthquake and tsunami in 2011.

“When there’s a threat that people don’t understand, sometimes you have to do something, even if it’s not relevant,” said Robert Dujarric, director of the Institute of Contemporary Asian Studies at Temple University. “Any action gives the impression to the voters that the government is in charge.”

Some parents expressed gratitude for the temporary school closings, as more is still to be learned about how the virus is transmitted. Emi Takase, a senior public relations manager at Hitachi, the electronics maker, said that her 12-year-old son had asthma and that she was already worried about the risk of infection.

Ms. Takase said her department had just conducted a drill on Wednesday to see if employees could handle their duties while working from home.

“On the other hand, I feel that there are many companies or people who may not be as fortunate as I am,” she said. “So I just hope that Japan will take this opportunity to find the right way to overcome the situation, because obviously the first impression of the news that schools are closed would be working parents thinking, ‘What shall we do?’”

Board Games for a Desert Island

Top E.U. Diplomat: Disinformation Report Not Watered Down for China

Huawei 5G hardware gets thumbs up from UK government