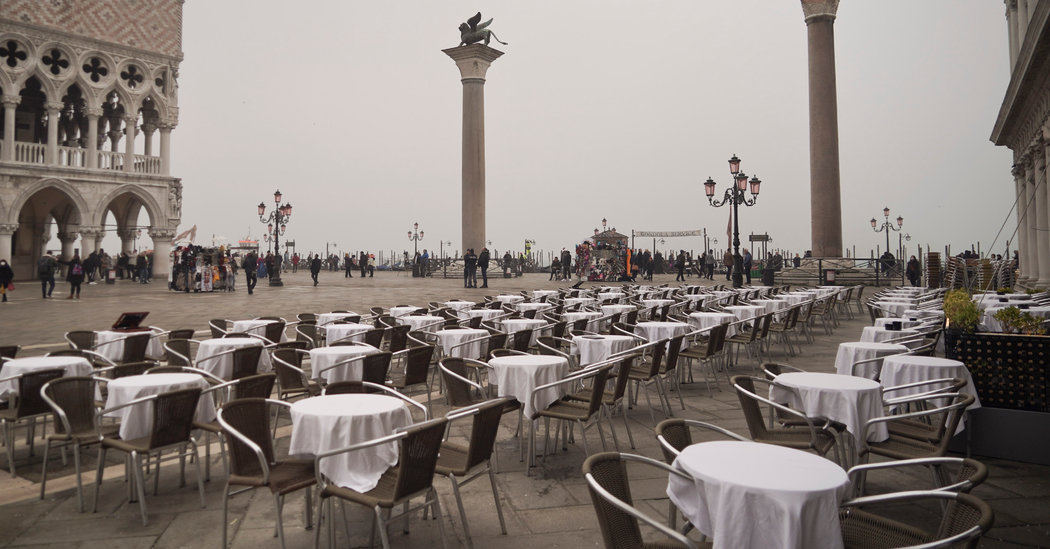 First came the flood, then came the disease.

Over the past three months, the tourism industry of Venice, has had its share of plagues.

Flooding in November, prompted by exceptionally high tides, led to mass cancellations. Now as Italy experiences the biggest coronavirus outbreak outside Asia, a similar and unwelcome drop-off is occurring.

According to Associazione Venezia Albergatori, an association of local hotel owners, 50 percent of reservations in Venice have been canceled in the last week. “The situation is dramatic for the industry,” said Vittorio Bonacini, the chairman.

Mr. Bonacini estimates that since November, Venetian tourism, worth 3 billion euro or about $3.3 billion, “has probably lost 800 million euro.” Since the outbreak began on Feb. 21, he said, Venice hotels have lost almost 70 percent of their international visitors.

Once plagued by overtourism, Venice is now ghastly empty.

Many of its world-famous hot spots, including Campo Santa Margherita and the Jewish Ghetto, are deserted. Few tourists can be seen even in the usually packed St. Mark’s Square.

“It feels like one of those zombie movies with one guy walking in an empty New York,” said Matteo Secchi, a hotel receptionist. He said tourists scared off by the virus are canceling their reservation up to April. “One month like this it’s something we can deal with, but if this drags for months, people will get unemployed.”

Venice is hardly the epicenter of the coronavirus outbreak in Northern Italy, and no lockdown has been imposed on the city.

As of Thursday, 650 coronavirus cases have been confirmed in Italy, according to the country’s civil protection agency (the ministry of health’s count, which lags the civil protection numbers, is slightly lower). The vast majority are in Lombardy, where 11 villages and small towns have been fully quarantined and the regional capital Milan has self-imposed a lockdown, with schools, gyms and public offices closed, while pubs and cafes are subject to an on-and-off curfew.

In neighboring Veneto, the confirmed coronavirus cases are 71, said the civil protection agency. Its regional capital, Venice, has closed only its schools and museums.

And, of course, the last two days of the Venice Carnival were called off, making international headlines.

Some Venetians didn’t approve. “I am not sure keeping museums and school closed, while bars and restaurants are open, sends the right message,” said Nicola Ussardi, a local salesman and community activist. “Consumption is taking a precedent over culture.”

When Gov. Luca Zaia canceled the carnival, critics accused him of spreading unnecessary panic. “It was a tough decision,” Mr. Zaia told the local newspaper Corriere Del Veneto, “but we have to put Venetians’ health above everything else.”

As some countries, including Israel and Ireland, are advising their citizens not to travel to Italy because of the outbreak, Venice is not the only city struggling with tourism.

Earlier this week Federalberghi, the country’s association of hotel owners, issued a statement asking the government for tax relief for the duration of the emergency. The association still doesn’t have a solid estimate on the outbreak’s impact on Italian tourism, but its president, Antonio Barreca, said cancellation rates “varied from 30 to 70 percent, depending on the city.”

But what sets Venice apart is that, unlike Rome and Milan, the city has almost no other source of income but tourism, and has already suffered a 35 percent cancellation rate in November, which raises some questions about the resilience and sustainability of its economic model.

“For ages, we staked everything on mass tourism,” said Mr. Ussardi, the community activist. “We really need to rethink that.”

Not sleeping? One writer describes how a weighted blanket could be...

Paul Kasmin, Gallerist Who Ruled a Mini-Empire of Art, Dies at...