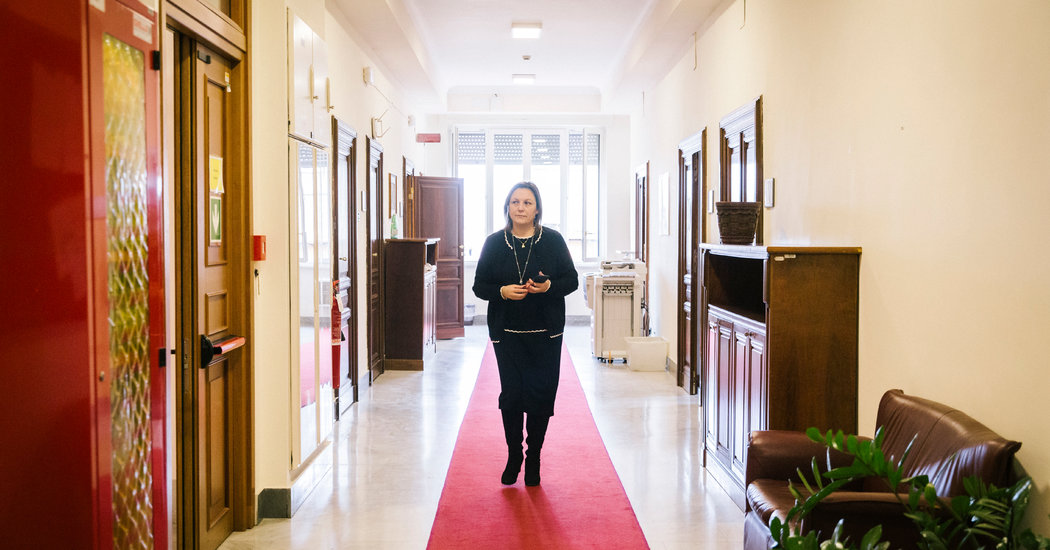 This article is part of our Women and Leadership special section, which focuses on women challenging traditional ways of thinking.

Men and women who run for parliamentary seats in Europe never fail to plaster their faces across posters, leaflets, and social-media ads as they campaign. Not Piera Aiello. A parliamentary deputy for Italy’s anti-establishment Five Star Movement, she was elected without ever showing her face.

That’s because the Sicilian-born Ms. Aiello testified against the Mafia in the early 1990s and has spent the last 28 years in a witness protection program run by the Italian state. During that time, she lived under a false name in a secret location in mainland Italy. When the Five Star Movement invited her to run under her real name in 2018, she accepted — and won, on the condition that she remain faceless. Only after the vote did she reveal herself in public.

Today, Ms. Aiello has a police escort everywhere she goes, except when inside Rome’s heavily guarded parliament building. She has since remarried and now has three daughters. Her day-to-day job involves drafting anti-Mafia legislation. Drawing on her extensive personal experience, she helps protect two categories of endangered people: the ordinary men and women who bear witness against the Mafia, and entrepreneurs who speak out against racketeering and find it tough to do business and avoid bankruptcy afterward.

“The Mafia has changed since the 1990s,” Ms. Aiello explained in a telephone interview from her office in Rome. “Before, it was a more regional organization. Today, the various Mafias have modernized, and they reach far beyond Italy, across the world. So there are much bigger economic interests at play: very major interests.

“For ordinary citizens, the Mafia is maybe less visible, but that makes it even worse, because the Mafia is hiding in places where you wouldn’t expect to find it,” she said. “With the help of new technologies, they’re involved in international fund transfers, money laundering, tax havens.”

Ms. Aiello was born in Partanna, in the province of Trapani, an area that was, and still is, a Mafia heartland. Her family had nothing to do with the Mafia — until a teenage boy named Nicolò took an interest in the 14-year-old Piera. Her father, a bricklayer who was ultra-protective of his two daughters and their premarital behavior, refused to let her date the boy. To protect her reputation, the pair were engaged, and their families began socializing.

Somehow, the family of Nicolò “was different from mine,” she recalled. “His father, Don Vito Atria, made all the decisions. On the few occasions that I went out with them, people would go up to him and say ‘I kiss your hands,’ the typical Mafioso expression,” she said. “I was a young girl, but I wasn’t stupid. I started wondering.”

After a while, she went up to her future father-in-law and asked him, point-blank if he was a Mafia boss. He denied it categorically. But she was not convinced — and broke up with her fiancé. Within a couple of hours, Don Vito appeared before her, saying: “You can do whatever you like, but sooner or later, you’ll be my daughter-in-law.”

“Basically, this man was threatening me, saying that if I didn’t marry his son, he would kill my family. In those days, this was all perfectly normal,” Ms. Aiello said. By now 18, the young woman decided to marry without telling her family, in the hope that things would improve. Yet eight days after the wedding, her father-in-law, Don Vito, was murdered.

“That’s when the apocalypse began, because my husband swore vengeance,” she said. He started going around criminal circles to track down his father’s killers. Four years after Don Vito’s murder, Ms. Aiello’s husband found the killers. Ms. Aiello was 22 and the couple had a young daughter.

But his adversaries got him first. “They shot and killed him in front of my eyes, in a pizzeria that we managed,” she said. She recognized the killers clearly: There were two inside the pizzeria, and two accomplices outside. In the four years that she had spent living with her husband, she had had to witness plenty of other criminal activities that she disapproved of. So she decided to become a witness against the Mafia and turn in all the guilty parties.

Her chief mentor in this enterprise was Paolo Borsellino, a judge and prosecuting magistrate based in Palermo who dedicated his life to fighting the Mafia, and who was assassinated by a car bomb in Sicily in July 1992.

Ms. Aiello’s first few years as a witness against the Mafia were “heavy,” she recalled: “You turned people in. You confirmed what you said in court. Suddenly, you were living an armored life, and being moved from one place to another for safety reasons.” How many people did she help get arrested? “A good many. I don’t have an exact count, because I never asked how many ended up in jail. I’m not interested. I’m only interested in helping deliver justice.”

After five years living under a different name and a different identity, with no job to speak of and living on a government stipend, she asked to be allowed to work, and took a job picking tomatoes and olives out in the fields.

Then she opened a business, eager to work and not live on government handouts.

Finally, in 2015, she got a job in the civil service — having lobbied for, and helped secure, legislation permitting the Italian government’s recruitment of witnesses living under state protection. Three years later, she was approached, via a mutual acquaintance, by the Five-Star Movement to see if she would consider running for office on their ticket. She consulted her family, and with their approval, decided to run — under her real name.

Today, from inside parliament, she campaigns actively on behalf of the fewer than 100 people living under the Italian witness protection program (a community of 400 people if you count their families).

That local Sicilians elected her to represent them in parliament in Rome was “probably because they saw that I was a decent person: that if I denounced Mafiosi, I was clean, at least,” she explained. “They saw hope for truth and justice.”

Her parliamentary term runs out in 2023. Ms. Aiello is not sure that she wants to run again. “This environment is not really made for me: Politics is not clean, not transparent,” she said. “There are deals and murky compromises, which I don’t like.”

Ms. Aiello acknowledged that, compared to 30 years ago — when she was a teenage girl meeting her future husband — circumstances in Sicily were very different for young and old.

“There are more laws, and the Mafia is more talked about,” she said. “There are classes on the subject in schools, and important anti-Mafia associations speak to schoolchildren, guarding future generations against organized crime.”

But the threat is still there, she warned. A major Mafia boss, Matteo Messina Denaro, lives near her hometown, and rules the area, she noted.

She recalled that Giovanni Falcone (the other famous anti-Mafia judge, who was killed in a highway bombing two months before Mr. Borsellino) always described the Mafia as “a phenomenon that had a beginning and will certainly have an end.”

“I believe that,” she added. “Maybe I won’t see it myself, but my children or grandchildren will.”

Russia and Turkey Ease Tensions in Syria, but the Sore Still...

With Most Weddings Still on Hold, Italian Designers Struggle

As Coronavirus Keeps the West at Bay, China Moves to Tame...