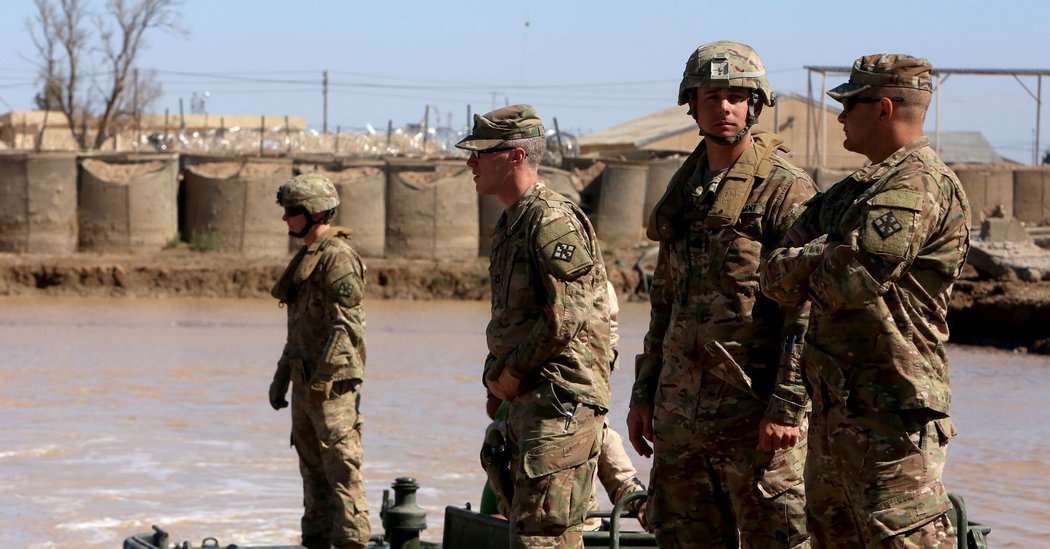 These types of photographs have often appeared in the past 18 years of United States wars in the Middle East as insurgent groups have relied on rudimentary but effective tactics to maim and kill their technologically superior enemies.

But in recent months, with relatively few American troops still in Iraq, militias there with ties to Iran seem to have perfected a strategy that has left U.S. forces with little recourse to defend themselves, according to American officials, who are scrambling to put effective countermeasures in place.

The attack in Taji, Iraq, home to a sprawling base roughly 15 miles north of Baghdad, involved about 30 rockets. More than a dozen hit the base, killing and wounding nearly 20 people.

Rocket attacks against joint American and Iraqi bases have slowly ramped up in recent months, especially after the U.S. airstrike on Jan. 3 that killed a senior Iranian commander, Maj. Gen. Qassim Suleimani.

An Iraqi militia with ties to Iran, called Kataib Hezbollah, was accused of a rocket strike in December that killed an American contractor. That attack, the death of General Suleimani and the Iranian ballistic missile strike that followed brought the United States to the brink of war with Iran.

It is unclear who launched the attack on Wednesday, but U.S. intelligence analysts believe that Kataib Hezbollah was most likely involved.

According to American military officials, the militia’s strategy almost always involves a mobile launcher, such as a truck, parked within several miles of one of several American bases and armed with a timed trigger set to around 30 minutes. The timer gives the crew ample time to flee before the rockets launch.

In 2015, as American troops flowed back into Iraq to counter the rise of the Islamic State, some U.S. bases there were defended by specific weapons systems for countering rockets, artillery and mortars, known as C-RAM, which were designed to defend against lower-altitude weapons such as the 107-millimeter rockets fired at Taji.

Those defensive measures were removed and sent to Afghanistan as the Taliban began retaking swaths of territory across the country and once more threatening American bases there. But even those systems are far from perfect, especially at short range.

Gen. Mark A. Milley, the chairman of the Joint Chiefs of Staff, was asked on Thursday by reporters why there was no protection from the attack. “There’s not a system there to defend against those types of rockets,” he said.

There are warning alarms to scramble rockets deployed there and bunkers that offer protection, which are staples on American bases in conflict zones around the world.

Gen. Kenneth F. McKenzie Jr., the commander of U.S. forces in the Middle East, told lawmakers on Tuesday that Patriot missiles and other air defense systems, most likely including C-RAM, were headed into Iraq.

Patriot missiles, which are used against high-flying missiles, would help counter any future Iranian ballistic missile strikes, much like the ones against Ayn al Asad and Erbil in January, which wounded dozens of Americans.

The rockets fired at Camp Taji — which military spokesmen called 107-millimeter Katyushas — are ubiquitous features of the insurgent arsenal in the Middle East and North Africa. These short-range, unguided weapons are cheap, mass-produced and far different from the large ballistic missiles that Iran fired at Ayn al Asad.

The name Katyusha, which is the Russian diminutive for Ekaterina, or Catherine, was the title of a popular folk song during World War II; the name was affixed to large artillery rockets fired by the Red Army because its actual name was secret. They were shot from truck-mounted launchers and debuted as German forces pushed on Moscow.

By the 1970s, the name was used by the Israeli Defense Forces — in which a number of Russian Jewish veterans of the Second World War served — to describe rockets fired by guerrilla fighters. Since then, it passed into popular usage and applied to large and small rockets of other classifications.

Americans have long been threatened by rockets of this type.

Vietcong fighters used them against U.S. bases, and they were important enough to be mentioned in an extensive review of the Vietnam War ordered in 1969.

In Afghanistan, the rockets were often fired from Pakistan across the border at American outposts; they could be fired with improvised timers from makeshift launchers. In Iraq, they were fired at American forces as far back as 2003, sometimes aimed directly at passing vehicles at short ranges or instead launched on an arc at faraway targets. In 2005, a number of 107-millimeter rockets were fired at two U.S. Navy warships in Aqaba, Jordan, killing a Jordanian soldier.

The rockets that killed three and wounded more than a dozen coalition troops Wednesday night were most likely Iranian Fajr-1 rockets, which are copies of a Chinese rocket called the Type 63.

At just over 4 inches in diameter and 4 feet long, the Fajr-1 weighs roughly 40 pounds and carries a 3- to 5-pound high-explosive warhead to a maximum range of about 5 miles.

They do not need to be fired from special launchers; instead, they can be fired from a simple dirt ramp or a pile of rocks with nearly as much accuracy as they could from a purpose-built launcher.

By the mid-1980s, the guerrilla tactic of using 107-millimeter rockets for harassing fires was adopted by U.S.-backed insurgents in Afghanistan, who were using Chinese-made Type 63s paid for by the C.I.A. to attack Soviet-held airfields. At the outbreak of the Libyan civil war in 2011, fighters there mounted 107-millimeter rocket launchers onto the backs of pickup trucks.

In the mid-2000s, Iranian-backed Hezbollah groups in Iraq partially disassembled rockets like these, affixing large homemade explosive warheads to the rocket motor to create a weapon that coalition intelligence officers call the IRAM, or improvised rocket-assisted munition. By 2012, high-explosive IRAMs were in use by insurgents in Syria, and in 2018, fighters there had used these rocket motors to propel IRAMs with chemical-weapon warheads.

The Wild West, on Skis

Roger Mayweather, Uncle and Trainer of Floyd, Dies at 58