ZURBATIYA, Iraq — The voices rose angrily and a knot of people gathered on the Iraqi side of the border crossing with Iran. Two Iranian diplomats were trying to get relatives out of Iran, where the coronavirus is rampant, and into Iraq.

“I am telling you their names have been sent,” one of the Iranians said, sounding exasperated.

“I am looking here, I don’t see their names,” said Brig. Gen. Ahmed Juma Abid of the Iraqi border police, as he nervously held up a stapled bunch of papers. “I cannot let them in unless Baghdad has sent their names.”

The diplomats stalked off making calls on their cellphones. Off to one side stood the subject of the kerfuffle, several women, in sweeping black abayas and veils that covered all but their eyes, and three children: a girl and two boys.

This was the scene at the Zurbatiya border crossing in central Iraq one day this week as border patrol guards in hazmat suits, goggles, masks and gloves struggled to keep out the coronavirus, an invisible enemy that is as adept at hiding as the most sophisticated smuggler.

The border with Iran — Iraq’s close ally and trading partner — had been largely porous, with families living on both sides and Shiite Muslim religious pilgrims going back and forth.

The coronavirus pandemic changed that overnight.

Iran is one of the epicenters, with at least 10,000 cases of the coronavirus — the third highest in the world — and experts say the actual number could be far higher.

Iraq had recorded only 93 cases by Friday and is desperately trying to insulate itself from Iran’s fate. On Sunday, Iraq will temporarily shut all land border crossings outside of Iraqi Kurdistan for two weeks. 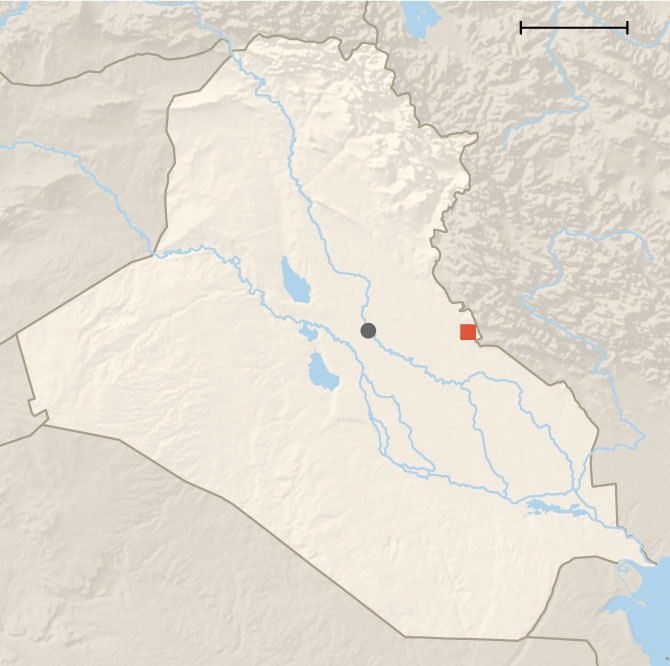 Most Iranians have been banned from entering Iraq for the last three weeks. Diplomats, however, had been excepted and some have been trying to bend the rules to bring in their families.

But most of those crossing the border are Iraqis. Some 500,000 live in Iran, and tens of thousands have returned since the virus broke out. They are university students, business people, construction workers and professors, and many have lived in Iran for years.

Their stories also offered a glimpse of the situation in Iran, which has been largely hidden from the country’s own citizens as well as from the rest of the world as the leadership in Tehran endeavors to project an image of having everything under control.

On Monday afternoon, Jowad Abu Sajat walked briskly across the border pulling a small rolling suitcase behind him.

“It’s a disaster there,” he said shaking his head. “I have left everything. I have my home there, my business. We have lived there for seven years.”

Mr. Sajat’s business was buying and selling iron in Mashhad, in the far northeast of Iran.

“Now everything is stopped because of corona,” he said. “My workers no longer come to work. There are no customers. The disease — we thought that the Iranians were giving accurate numbers, but then when I went out and saw people on the street. I understood the number of sick and dead was higher than they had said and I was afraid.”

He sent his family ahead, hoping he could keep his business going, but three weeks later decided it was pointless.

As soon as he crossed into Iraq, health workers took his temperature — a fever of 100.4 or higher would have sent him to quarantine for additional tests. He was questioned and asked for his contact information.

The provincial health ministry sends a team to check on recent arrivals every couple of days to see if they develop symptoms.

Like everyone else coming from Iran, Mr. Sajat was told to self-quarantine for 14 days, then sent on his way.

A 23-year-old Iraqi mother of two boys, Hoda Ghulab Ibrahim, arrived from Ilam, a city in western Iran, and described a place that sounded like a ghost town.

“Life has stopped in Elam,” she said as she was waiting for her medical check. “The souks are closed, the schools are closed the situation is getting worse every day.”

Iran has closed schools and universities, prohibited travel between provinces, and canceled sporting events and Friday Prayers, several returnees said. Cafes and restaurants are closed, as are museums and movie theaters.

“I could not leave my house because I was afraid of my children getting infected,” Ms. Ibrahim said. “Most of the people are at home now. Life is dead.”

Afraid to visit their friends in person, people are talking for hours on the phone, she said.

Despite the virus’s heavy toll in Iran, at the border there was a steady flow of Iranians returning home. Most had no choice — they were workers whose visas had run out or pilgrims who had completed their tour.

As porters trundled their luggage across the sand and rock expanse leading to the border gates, most shrugged off any apprehension about going back.

“I am going back because I was afraid they would close the border,” said Zahra, 24, who did not want to give her last name. “But we live in Hamedan and there is no corona there,” she added, referring to a city in western Iran.

“We believe in God; your fate is written on your forehead,” she said touching her index finger to her brow. “And besides, the Iranian people are strong.”

For Mazin Abbas Absawi, the decision to leave the Iranian pilgrimage city of Qum was difficult. He has been studying religion at a seminary there for four years. Although it closed last month because of the coronavirus, Iran now feels more like home to him than Iraq.

But with six children and his extended family with him, he felt that staying the city where the virus likely began in Iran was too much of a risk.

His 13-member family filed across the border quietly, clearly worried about the risk of infection. They stood in a line in the medical tent facing the relatives of the Iranian diplomats, who were sitting in the few chairs waiting for their status to be resolved.

The Iranian diplomats and their relatives appeared unworried and none were wearing masks or gloves.

The Absawi family was fully covered: from the youngest to the oldest, each was wearing a mask and plastic protective gloves. The gloves were so big on the youngest children, it look as if they had just plunged their hands into baggies.

‘If I am going to die, I feel I would rather die in my own country,” said Mr. Absawi as he headed for his home province of Muthanna, in Iraq’s southwest.

The Iranians were soon off to a hotel in Najaf, Iraq, where they were to wait for the required paperwork.

That night, the Najaf Health Department sent medical workers to swab them and sent the samples to Baghdad. One of the women tested positive for the coronavirus, said Dr. Radwan Kamil al-Kindi, the director general of the Najaf Health Service.

One of the diplomats, the Iranian consul in Najaf, was upset, Dr. al-Kindi said, and refused to accept the news.

“So I gave them a choice, go into quarantine for 14 days or leave,” Dr. al-Kindi said. “The consul did not want to go into quarantine. I kept thinking, ‘Damn you guys, you bring in this infection.’ All of our infections in Iraq came from Iran.”

Dr. al-Kindi held his ground. The diplomats and their relatives returned to Iran that night, said Dr. al-Kindi, looking a little embarrassed that he had to be so tough with a foreign guest.

“But, you know, I cannot let them infect my people,” he said.

Transportation shut down in city where new coronavirus originated

Teslas can now see and slow for traffic lights and stop...