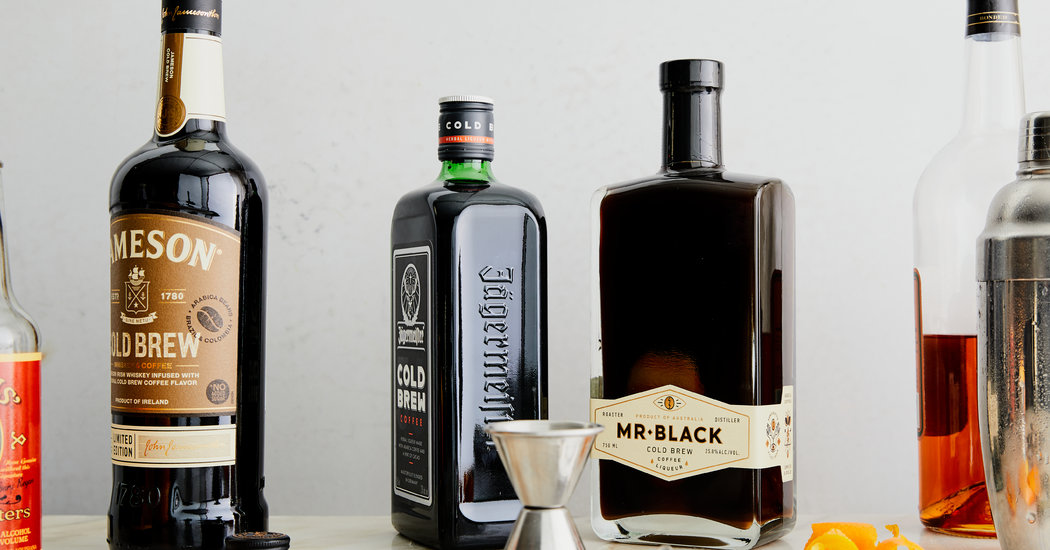 Coffee has been cool for years now. Coffee liqueur, not so much.

Your relative might have a bottle of Tia Maria on hand around the holidays, and Kahlúa is indispensable should you hold a “Big Lebowski”-themed party. (The main character, the Dude, favors White Russians.) But to discerning drinkers, such liqueurs have a reputation as sweet and syrupy, something best left to the Mudslide fanciers of the world.

A few new coffee-flavored liquors have come on the market recently, though you’ll have to squint to find the word “coffee” on the label. It’s there, but far easier to spot are the words “cold brew” — one of the most embraced terms in modern coffee culture.

“The neck tags on the bottles say ‘cold brew’ really, really big,” said Tom Baker, a founder of Mr. Black, the Australian liqueur that is arguably the leader in a new breed of spirits that make a big deal about being made with cold brew, not plain old coffee. Among the new products are two recognizable names: Jameson Cold Brew and Jägermeister Cold Brew Coffee, both introduced in the last few months.

Mr. Black has managed to find a home in more than 4,000 bars and liquor stores in the United States in just two years. An espresso martini using it is one of the top sellers at the stylish NoMad Bar, and the bar at Crown Shy, a new restaurant in the financial district, sells an old-fashioned variation using the liqueur. It is consistently one of the best-selling liqueurs at Astor Wines & Spirits, the destination liquor store in Manhattan. Recently, Mr. Black’s sales in the United States exceeded those in its native Australia

That success seems to be, at least in part, because of the shift in terminology.

“Cold brew is the poster child of the specialty coffee revolution,” Mr. Baker said. “When Stumptown, Intelligentsia and all these guys came in with high-quality coffee, the thing that really cut through was cold brew. For the consumer, I think it’s a pretty clear signal that we come from the new school for coffee.”

A survey conducted in 2019 by the National Coffee Association found that 80 percent of American adults were aware of cold brew.

When Mr. Shine was making the rounds of bars a few years ago, he noticed bartenders mixing amari with cold brew. By 2018, he and the company had begun work on the cold-brew version of the liqueur.

Mr. Shine thinks the new version could nudge Jägermeister beyond its late-night-shots reputation. “Jägermeister Cold Brew opens more occasions for us,” he said. “It opens up brunch, it opens happy hour, it opens times when we wouldn’t be selling Jägermeister.”

This is not to say “cold brew” connotes nothing but cachet. Mr. Baker and his team go to considerable lengths to make their liqueur, buying and roasting three types of beans for the blend, which is notably less sweet than other coffee liqueurs.

Still, when Mr. Baker first came to Astor Wines & Spirits, the spirits buyer there, Nima Ansari-Bahmani, was skeptical. He regarded coffee liqueurs as a “category where there has been zero innovation for a long time,” he said. He has been surprised by the sales.

“It’s a combination of things consumers are interested in,” Mr. Ansari-Bahmani said. “It’s a very quality product, with smart branding and a lot of transparency.”

Mr. Black recently expanded its offerings. Still employing the language of coffee culture, it introduced a limited-edition “single-origin” product, using only one kind of bean from the Finca Villa Betulia growers in the Huila region of Colombia. Priced at $50, only 600 bottles were released in the United States. More variations will follow.

At present, Jameson Cold Brew is also a limited-edition product. But that may change, and early sales figures have been encouraging. As Jessica Hochberg, a senior brand manager for the whiskey, said, “Jameson and coffee have had a longstanding relationship.”

The Men Australia Detained in a Secretive Detention Camp

Smile, Australia. Look at What’s Flourishing Despite the Pandemic.

The Best Movies and TV Shows New to Netflix, Amazon and Stan in Australia in August

Be Quick, Press High, Cut Back: How to Score in the...

Pandemic Gives S.O.S. a New Meaning for U.K. Cheesemakers: Save Our...

Medicare Is Updating Coverage to Help in the Coronavirus Crisis

Inside G.M.’s Race to Build Ventilators, Before Trump’s Attack

How Far Should Police Go in Enforcing Coronavirus Lockdowns?

An Australian Soap Opera Returns, With Distance (and No Kissing)