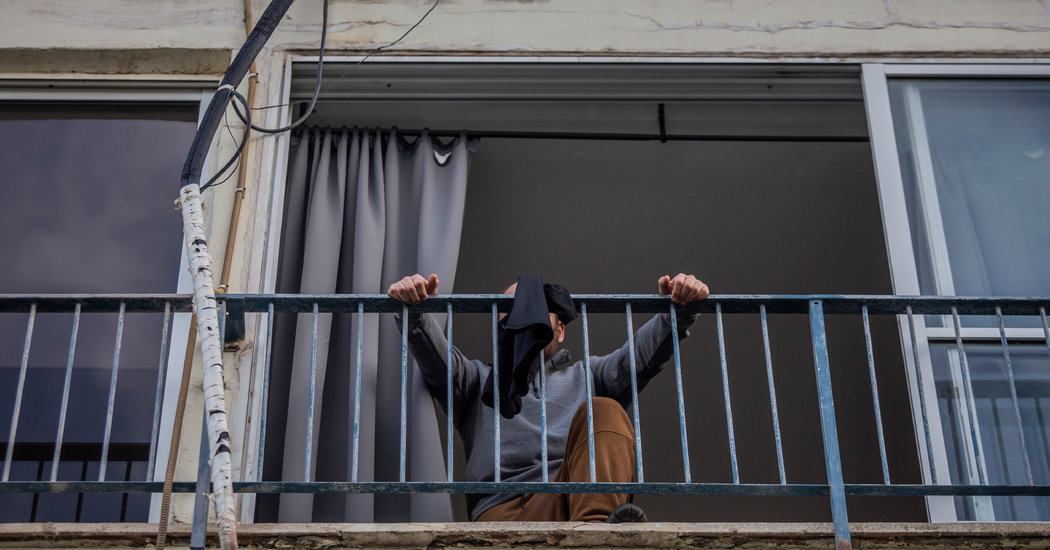 JERUSALEM — Hundreds of Israelis mounted a protest convoy on a main highway into Jerusalem on Thursday, demonstrating against what they called antidemocratic measures by Prime Minister Benjamin Netanyahu and his allies that they said were taking the country down a path to dictatorship.

In what appeared to be a concerted effort to stymie the demonstration, the police closed the highway and shut roads surrounding Parliament and the Supreme Court, then arrested some who protested outside Parliament on foot.

That Israelis were taking to the streets to protest — with many flying black flags from their cars — despite concerns about the coronavirus, indicated how furious many have become about a series of contentious steps Mr. Netanyahu has taken since his defeat in the March 2 elections.

“We are proud to be the only democracy in the Middle East, and we want to keep it that way,” said Shikma Schwartzman, a physicist from northern Israel whose angry Facebook post, widely shared Wednesday night, gave rise to the vehicular demonstration on Thursday.

Mr. Netanyahu has portrayed those actions as vital to contain the virus. They include his decision on Sunday to shut down most courts and, on Tuesday, to order the Internal Security Agency to use a secret database of citizens’ cellphone data to track down people who may have come into contact with carriers of the illness.

Both moves came in middle-of-the-night decrees without legislative consultation or oversight.

For many, the last straw came Wednesday, with the closing of Parliament by the departing speaker, Yuli Edelstein, a member of Mr. Netanyahu’s Likud party.

He adjourned Parliament despite calls by a majority of the newly elected lawmakers to convene to allow them to assume the leadership of important committees and to elect a replacement for Mr. Edelstein.

Mr. Edelstein said Thursday that he would allow Parliament to convene on Monday. He has said he did not shut down Parliament but had merely called for a “timeout” to allow Likud and Blue and White to make progress in their negotiations.

The centrist Blue and White party, whose chairman, the former army chief Benny Gantz, is seeking to form a government and succeed Mr. Netanyahu as prime minister, said it would seek the Supreme Court’s intervention on Thursday to try to reconvene the Parliament.

Every day that goes by without Mr. Gantz’s party in charge of Parliament is a win for Mr. Netanyahu, because Mr. Gantz has a limited time to form a government and needs to apply legislative pressure on Mr. Netanyahu to have a chance of forging a coalition.

The Supreme Court weighed in later Thursday on a separate issue: the use of cellphone data to track citizens as part of the effort to fight the virus.

The court ruled that if Parliament has not established the relevant oversight committees by Tuesday, the authorities will be barred from continuing to use the security agency’s trove of cellphone metadata to find people who should be quarantined.

Mr. Netanyahu announced new restrictions on Thursday, ordering Israelis to stay in their homes except when buying groceries and medicine.

The convoy protesters said the police were doing all they could to frustrate them, first by ticketing motorists for driving too slowly, then by demanding to conduct roadside inspections, and then by closing the main highway into Jerusalem to all traffic.

Shahar Argaman, a reserve brigadier general who joined the convoy at the urging of a group of fellow veterans of the Israeli Special Forces, said that officers had accused them of interfering with traffic even though the convoy had been in a single right-hand lane and three other lanes were empty.

Many in the convoy managed to make their way into Jerusalem anyway, only to find the streets around Parliament and the Supreme Court abruptly closed to traffic.

A police spokesman, Micky Rosenfeld, said vehicles had been stopped “to prevent a large gathering, due to orders against gathering in public places.” Referring to the demonstrators, he added, “They wanted to get out of their cars in Jerusalem to hold a protest, so it was a necessary measure.”

The police, Mr. Rosenfeld said, were preventing anybody arriving in Jerusalem from gathering in groups of more than 10.

But Moshe Yaalon, a lawmaker from Blue and White, cautioned the police chief to “make it clear to your charges that they are the officers of the Israel Police, and not the Netanyahu Police.”

Ms. Schwartzman, whose Facebook post ignited the protests, said she was urging Israelis to fly black flags from their windows and balconies all over the country to rally behind their elected lawmakers.

She said the aim was that the coronavirus “will not give the justification for this place to stop being a democracy and become a dictatorship.”
“We’re afraid that the government will announce a curfew,” she added, hours before Mr. Netanyahu ordered Israelis to stay in their homes. “And we doubt it’s about corona.”

Saudi Arabia Abolishes Flogging as a Punishment for Crime

Despite Rising Tensions, Iran and U.S. Are Negotiating a Prisoner Release

4 Times The MCU's Shared Universe Was A Bummer

Guardians Of The Galaxy’s James Gunn Filmed A Dirty Version Of...

Accused Mastermind of Mumbai Attack Convicted of Links to Terrorism