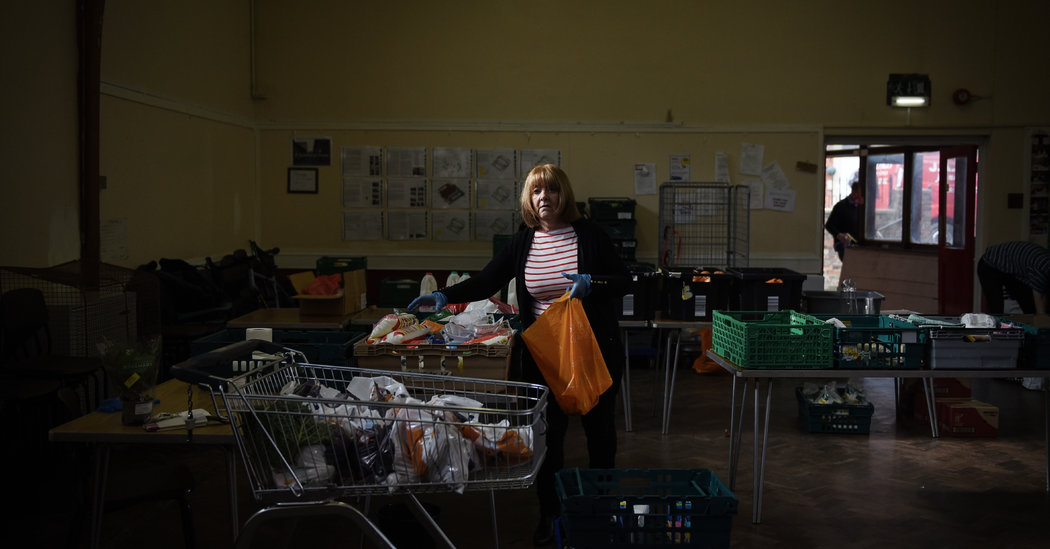 LONDON — As panicked shoppers in Britain empty supermarket shelves and hoard goods amid the coronavirus outbreak, food banks that depend on donations are struggling to stay afloat, and some have been forced to shut down.

Vulnerable families who depend on emergency food packages to survive received limited supplies this week as food banks across Britain fell short on items like pasta, tinned vegetables, long-life milk, baby food, diapers and toilet paper. And the winter months, when people in crisis are less likely to meet the basic costs of living, are particularly critical.

“It’s very scary, because everyone is walking around with bags and trolleys full of food stocking up for the next few months, while I’m worrying about whether I have enough food to feed the children this week,” said Angie Fowler, a mother of three who depends on the Chalk Farm food bank in northern London. “If this place closes down, I don’t know what we’ll do. We have no backup.”

Even before the coronavirus outbreak, food banks in the country were struggling to meet demands that have steadily increased in recent years. Last year, the Trussell Trust, Britain’s largest network of food banks, delivered 1.6 million three-day emergency food supplies to people in crisis — an 18.8 percent increase on the previous year.

“It is possible that food banks will face increased demand as people lose income, at the same time as food donations drop or staff and volunteers are unavailable, due to measures rightly put in place to slow the spread of infection,” said Emma Revie, the Trussell Trust’s chief executive.

“All of this comes when food banks are already dealing with a record level of need for emergency food,” she said. “We’re working with our network on how best to support people as the situation unfolds.”

The Islington food bank in northern London said on Monday that it would shut down next week because of a decline in donations and volunteer staff. Other food banks have been reducing their services.

The North Paddington food bank in western London, which provides food to more than 100 households each week, said its donations were down 25 percent. On Wednesday, volunteers handed out pre-prepared packages and limited the time people spent on the premises.

“We are just focusing on keeping people safe and ensuring they have enough to eat through this crisis,” said James Quayle, the food bank’s manager. “Right now, we are working hard to maintain our own supply chain as donations have become less reliable.”

Mr. Quayle said he was surprised by how calm people at the food bank have been in the onset of the outbreak, especially when compared with the panicked shoppers in the supermarkets. “No one is asking for extra,” he said.

Most food banks anticipate having to deliver more food packages in the coming weeks as people go into self-isolation, an increase that will require additional staff and resources.

The Sufra food bank, which serves a large number of refugees and asylum seekers, has canceled most of its services. Instead it is providing limited food parcels, and a lack of supplies is forcing most recipients to closely ration their packages.

“All the indications are that the U.K. is on the precipice of a recession, which will mean that financial donations to the charity will also start drying up while demand for food aid rises,” said Rajesh Makwana, the food bank’s director. “Add to this the impact of austerity and universal credit, and you can see why this really is the perfect storm.”

Britain’s biggest supermarket chains, including Asda, Tesco and Sainsbury’s, introduced restrictions on purchases on Wednesday after shopping aisles were stripped bare within hours of some stores’ opening. They will also reserve the first hour after opening to older people and vulnerable people to ensure them access to essential supplies.

Adam Connell, a volunteer who has been delivering packages to seniors and other vulnerable people in recent weeks, fears that the outbreak will push struggling people deeper into poverty and social exclusion. Around 14 million people live in poverty in Britain — about one-fifth of the overall population — according to the Joseph Rowntree Foundation, an independent social change organization.

The loss of food banks carries implications far beyond the distribution of food, executives say.

“Foodbanks don’t just provide food — they provide a support network and a social platform for people who would otherwise feel alone and excluded,” Mr. Connell said. “If the spread of the virus gets to a point of crisis like we’ve seen in Italy, I’m not sure how we will be able to continue providing these services.”

Schools will close starting on Friday throughout Britain, and many parents worry about the added pressures of providing lunches for their children without the help of food banks and other social services.

“It’s already difficult to feed the children during the school holidays,” Ms. Fowler said. “If the schools stay shut and we’re stuck at home all day, I’m not sure how we’ll manage.”

“I’m already dealing with depression and anxiety,” she said. “I can’t deal with this.”

Desperate for Aid, Ukraine First Has to Fight Corruption