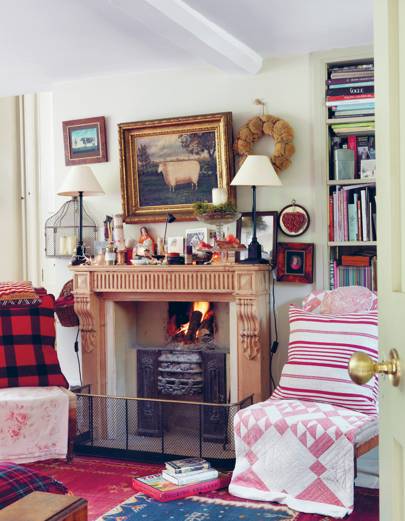 Brook Cottage—a gratifyingly hefty, medieval stone structure—stands improbably picturesquely amid the undulating Somerset hills, just outside the city of Bath. In addition to its latest incarnation as the start and end point of Cabbages & Roses, the history of the house raises as many questions for a meditative Christina as those it so articulately answers.

“In many ways, we know so little about it, and that in itself is endlessly intriguing,” she reflects. “The wider vernacular architecture of the day and educated deduction point to it having been built in the 1500s, but it is difficult to date precisely. What I find so captivating, though, is to imagine who lived here in the days before the renaissance, and how they lived here,” she says, before asking: “What have these old stones seen?”

Whatever the extended narrative—real or imagined—Brook Cottage has, according to Christina, “kind walls,” a sentiment echoed by the woman who recently turned up on the doorstep to see the house to which she, along with some twenty other children, had been evacuated during World War II. “It seems that they’d lived on rabbits for the duration of the war! But somehow, they appear to have been happy here, despite all being crammed together in what is now my bedroom.”

It is self-evident to anyone who crosses the threshold of Brook Cottage that it does indeed resonate with easy contentment. For Christina, it was, simply and obviously, “the perfect country cottage” upon first sight, and also where she would be, enduringly, her happiest. For her children, it constituted the pastoral idyll from which they formed their world view. For her business, it would become the central core and the lifeblood.

This deep and unswerving devotion has not waned. Rather it has proliferated, extending to the burgeoning family that Christina and her husband, Mark, have brought up within these kind walls and also to their grandchildren—born and yet to come. “That love is the linchpin,” says Christina. “Everyone comes back here. It is the meeting point of our lives.”

This is an extract from Living Life Beautifully, by Christina Strutt with Nancy Alsop, and photography by Simon Brown (CICO Books, £25).

How to choose living room furniture

From the archive: how to arrange your stuff (1966)

The Beckhams take to baking during the UK lockdown

There’s No Place Like Kangaroo Island. Can It Survive Australia’s Fires?

U.S. Passengers Prepare to Evacuate From Cruise Ship in Japan

What we saw and liked at Maison et Objet