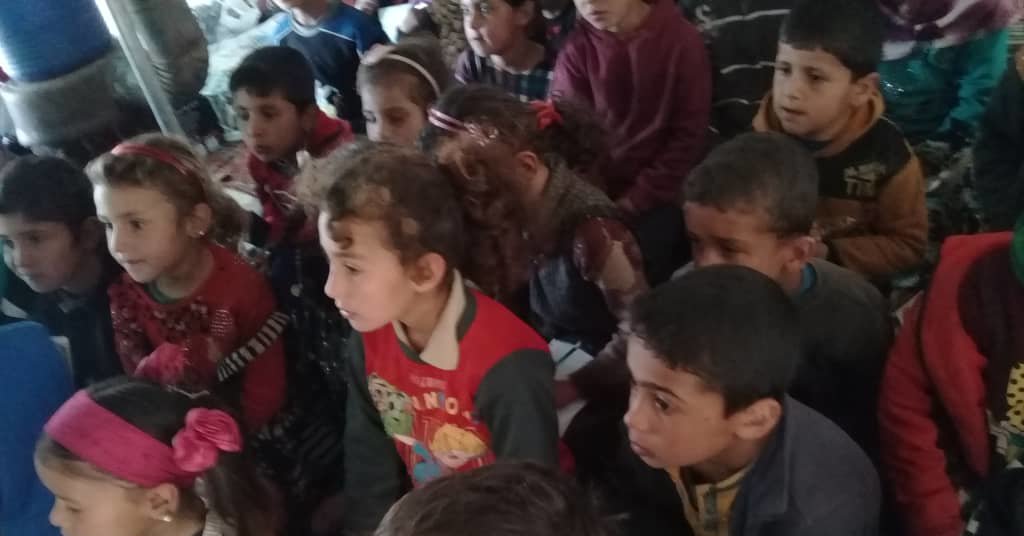 BEIRUT, Lebanon — The camp school is only a tent — cold and cramped, its floor covered by a rug whose intricate pattern is hard to make out under the crowd of kneeling students. The walls are plastic sheets. There are no desks, no chairs, no toilet, hardly any books.

But there is a whiteboard. A teacher has written a series of addition problems: 687 + 536. 450 + 276. 265 + 603. Little girls in pigtails and teenagers in head scarves bend their heads in concentration, scrawling sums on borrowed notebook paper.

The school, in a camp for displaced people in northwestern Syria, serves about 60 students, boys and girls, ages 4 through 14. Most are among the nearly one million people, more than half of them children, who have fled toward the Turkish border over the last three months.

They are running for their lives to escape Syrian government forces and their Russian allies, who are storming through Idlib Province, the last refuge of anti-government forces, in a campaign to reclaim it after nine years of civil war.

Northwestern Syria has been in a state beyond emergency for so long that most children cannot remember what normal life is supposed to be like. Shelter, food, medicine, warmth — there is not nearly enough of any of it in Idlib, where a cease-fire has done little to bring people home.

Yet aid workers have kept going, trying to deliver tents, water, food and fuel. Doctors and nurses have continued to provide care. And inside the cold tent in the camp for the displaced outside the small village of Bhora, four teachers offer all they can: a few hours of instruction, a flicker of normalcy.

Their school is called Return School.

“We’re hoping to be back home soon,” said Qassem al-Ahmad, 30, a teacher at the school, explaining the name in a phone interview. He fled his village near Aleppo, Syria, two months ago. Like most of the children huddled on the rug, he now has nowhere to go.

Many of the students, whose families have packed up and moved two, three, four or more times to escape successive rounds of fighting, have not regularly attended school in years. Some have not been at all. Mr. Ahmad estimated that about 40 percent of his students are illiterate.

Merely attending school can be a hardship. In the camp, many parents need their children to collect wood to burn or to earn extra income by doing odd jobs. Families frequently leave the camp in search of better shelter, perpetually rootless in a situation in which nobody can say what places are safe, or how long safety will last.

Despite the cease-fire, the camps offer little security. Winter temperatures have relented slightly, but at least a dozen children have frozen to death in nighttime temperatures that stalled below freezing last month.

Aid groups say about a quarter of the displaced are surviving on one meal a day. Doctors Without Borders staff members have reported seeing people in the camps boiling leaves for meals, said Cristian Reynders, the group’s northwest Syria operations manager.

As bombs have knocked 84 medical centers out of service, those that remain are teetering under the burden of thousands of added patients, supply shortages and back-to-back trauma surgeries.

Some medical workers have sent their families north ahead of them while they continue reporting for work, not knowing when — or if — they will see them again.

“Every day I think it might be the last goodbye,” said Dr. Zaher Hnak, a urologist-turned-surgeon at Idlib Hospital, who had to abandon his previous hospital after it was hit in an airstrike.

All through his daily commute, plodding up roads bumper-to-bumper with families fleeing by truck, car, motorbike and on foot, Dr. Hnak worries that something will happen to his own wife and children before he can return.

“When I get to the hospital,” he said, “the first thing I do is call home to check on my family.”

Schools also have been targeted by Russian and Syrian forces. More than 180 schools are damaged, destroyed or currently housing the displaced.

On a single day in February, local aid groups said, airstrikes hit eight schools around Idlib City, killing three teachers and a student. At least six more students were injured as they tried to evacuate.

But everywhere there are children in need of schooling.

Mr. Ahmad, the teacher at the Return School, once planned to teach philosophy to college students. Now it is a good day if he can hold his young pupils’ attention. The distractions are many: cold fingers, one-meal-a-day bellies, warplanes that snarl overhead. And that is if the children come to school at all.

“I put in so much effort, but with almost no results,” he said. “The students? Most of them are just scared every time they hear the sounds of the planes. We don’t have anything to distract them with or teach them with. We only have this tent.”

For Mr. Ahmad, his wife, Malak, 28, and their young son and daughter, home was the village of Al Iss, outside Aleppo, until they fled two months ago. Ever since, they have lived in a leaky abandoned building near the camp, sharing one room with 17 other people.

Some of the displaced live in tents, but many sleep in half-finished buildings, under olive trees or, in some cases, under nothing. Tents along the Turkish border, which is sealed shut against refugees, hold an average of nine people each, an International Rescue Committee survey found.

The displaced crowd 20 or 30 to a room in distant relatives’ homes, public bathrooms, converted schools and empty office buildings.

When the Syrian uprising began in 2011, Mr. Ahmad was a fourth-year philosophy major at the local university. As the war came to a boil, forcing him to drop out, he started teaching at a public school, where his wife also worked.

Once the Ahmads found their own family displaced, they decided the best use of their time was to keep doing what they knew. Working with two teachers from their old village, they commandeered a narrow tent and spread the word that they were holding classes.

Inside, the teachers pair the students who cannot read or write with more advanced ones, hoping some learning will rub off. Age no longer corresponds to level. Some of the fourth-graders are 14 years old.

Mrs. Ahmad teaches the 6- and 7-year-olds, relying on simple educational apps she downloads on her husband’s cellphone.

The teachers labor to convey basics like Arabic letters and numerals, asking those with notebooks to tear out a few sheets of paper to share with those who have none.

“We’ve got nothing to entertain these students — no stories, no drawing, no painting,” she said. “I give them just the basics.”

Class lasts for only a few hours, from 8 a.m. to 10:30 or 11 a.m. Homework sometimes consists of copying out a single sentence. At recess, the students play in the muddy space between tents.

Mr. Ahmad used to reward the strongest students with little gifts — small toys, stationery, pens. Now even that is beyond his means.

“I try to promise them some incentives, even though I know it’s hard to keep promises like that,” he said. “Frankly, sometimes I don’t have money for bread.”

His wife keeps wishing aloud for a tent — anything to escape their shared room, so crowded they can barely lie down to sleep — and a mobile phone she could use to keep in touch with her brothers and her sister.

“I keep promising her: One day,” Mr. Ahmad said. But he admitted he had no hope of being able to afford either.

The next day, the Ahmads were there to open school at 8 a.m. There was nothing else to do.

In China’s Crisis, Xi Sees a Crucible to Strengthen His Rule

Boeing Refuses to Cooperate With New Inquiry Into Deadly Crash

Anatomy of a Lie: How Iran Covered Up the Downing of...