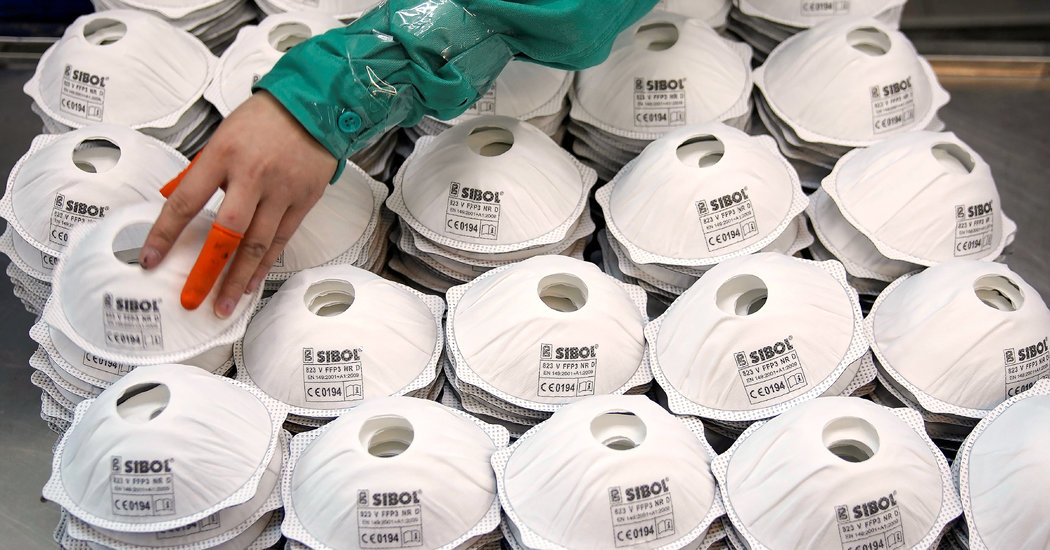 SHANGHAI — American front-line medical personnel are running desperately short of masks and protective equipment as they battle the coronavirus outbreak. China, already the world’s largest producer of such gear by far, has ramped up factory output and is now signaling that it wants to help.

Reaching deals won’t be easy. Increasingly acrimonious relations between Washington and Beijing are complicating efforts to get Chinese-made masks to American clinics and hospitals. A breakdown over the last few days in the global business of moving goods by air around the world will make it costly and difficult as well.

At heart, the two countries, which only recently reached a truce in President Trump’s trade war, have some similar problems. Both face harsh questions over their missteps in responding to the outbreak. Washington and Beijing make handy foils for each other — and essential protective gear could get caught in the middle unless they reach an understanding.

The Trump administration is signaling it isn’t too proud to buy Chinese masks, gowns, goggles and other equipment. At the same time, said Peter Navarro, a senior Trump administration trade official, it will object to any Chinese effort to turn deliveries into fodder for propaganda that would bolster China’s image at home and abroad.

“My job at the White House right now is to help find whatever the American people need and buy it from wherever we can, and if we need to send a plane to go get it, we’ll get that done using the full force of government and private enterprise,” Mr. Navarro said in an interview.

“If China or any other country has some masks, gloves or other products we need for the American people, we welcome that with open arms,” he said. “What we don’t need is some kind of propaganda exercise during a crisis that the actions of the Chinese Communist Party have made far more serious than it otherwise would have been.”

American officials have estimated that the country would need 3.5 billion masks to cope with a yearlong pandemic. Local health officials in the United States say nurses, doctors and other responders face hazards to their own health as infections mount.

China has what they need. Beijing undertook an enormous national mobilization to respond to its outbreak and now produces 116 million masks a day, or about 12 times what it made before. Most are disposable surgical masks, not the N95 respirators that health care professionals need. But a second wave of production of N95 respirators is starting to come onto the market, respirator and mask traders said.

“Factories are producing around the clock,” said Ida Zhang, the marketing director at Dongguan Witop International Trade, a respirators and masks trading firm in Dongguan, China.

Beijing forced personal protection equipment producers, including factories that made gear on behalf of Western companies, to sell every unit they made to the government when the epidemic was at its worst in China from late January through February. But Chinese officials have said they did not formally ban exports, and a growing number of Chinese factories are cautiously starting to ship their products overseas.

China has already begun engaging in “face mask diplomacy,” making sizable shipments to Italy, South Korea and the Philippines while promising or providing humanitarian assistance from Japan to Iraq and from Peru to Spain. A leading entrepreneur in China, Jack Ma, offered to donate one million masks and 500,000 tests to the United States.

But while officials on both sides talk about striking deals, the two governments in public are sharpening their attacks.

The Trump administration is angry about China’s failure to share information about its own epidemic, as well as its role in propagating a conspiracy theory that the virus was started by the American military. The Chinese government is deeply upset about the Trump administration’s efforts in recent days to label the newly emerged coronavirus as a “Chinese virus,” and leery of being perceived by the Chinese public as too eager to help the United States at a time of bilateral tensions.

President Trump has repeatedly used “Chinese virus,” ignoring criticisms that the term is racist and has helped fuel hate crimes in the United States.

Secretary of State Mike Pompeo has accused China of allowing infected citizens to spread the disease around the world. On Friday, he implied that China had still not shared all of its information about the virus.

Hua Chunying, the Chinese Foreign Ministry spokeswoman, hit back at Mr. Pompeo on Twitter on Friday, noting that the World Health Organization had praised China’s measures.

“Stop lying through your teeth!” she wrote, using a level of invective increasingly prevalent in the bilateral relationship. “As W.H.O. experts said, China’s efforts averted hundreds of thousands of infection cases.”

Despite the harsh language, the two sides have reasons to cooperate. The Trump administration could face a severe backlash if its attacks on China hold back needed supplies. China faces a rising number of infections from people returning from overseas as well as a possible second wave of infections as people return to offices and factories.

The two countries already are working together behind the scenes. Michael Pillsbury, a senior fellow at the Hudson Institute who advises the Trump administration on China, pointed to efforts underway by the American biotechnology companies Inovio Pharmaceuticals, GeoVax and Gilead Sciences to develop a coronavirus treatment in China, some in partnership with Chinese companies.

The problems go beyond the political.

Global carriers like United Airlines and Cathay Pacific have slashed international flights to near zero as countries bolster their borders. About half the world’s air cargo traveled last year in the bellies of passenger planes, said John Peyton Burnett, the managing director of TAC Index, an air cargo pricing data company in Hong Kong.

Now the world’s passenger airlines are shutting down much of their networks. Cathay Pacific, the dominant air carrier in Hong Kong and one of the largest airlines across the Pacific, announced late Friday afternoon that it was canceling 96 percent of its passenger services in April and May.

Yet so acute is the need for airfreight capacity that the airline said it would continue to operate some of its passenger planes just to use the cargo capacity in their bellies, while leaving the seats empty.

The cost per pound across the Pacific has tripled in the last few days as airlines have shut down most of their international passenger flights, according to freight agents. Shipping now costs considerably more than the masks themselves.

“It’s like nothing we’ve ever heard of, or seen happen,” said Jia Qing, a freight agent at Janco International Freight in Shanghai. “In normal times the price would change once every year, and now it’s changing three times a day.”

In Hong Kong, Anxiety and Defiance Over Trump’s Move to Cut Ties

Amazon to start paying US warehouse workers double time for all...

Another Virus Victim: The U.S. as a Global Leader in a...

A Reporter’s Journey Across a Resuscitating, and Oddly Changed, Europe

There’s No Place Like Kangaroo Island. Can It Survive Australia’s Fires?