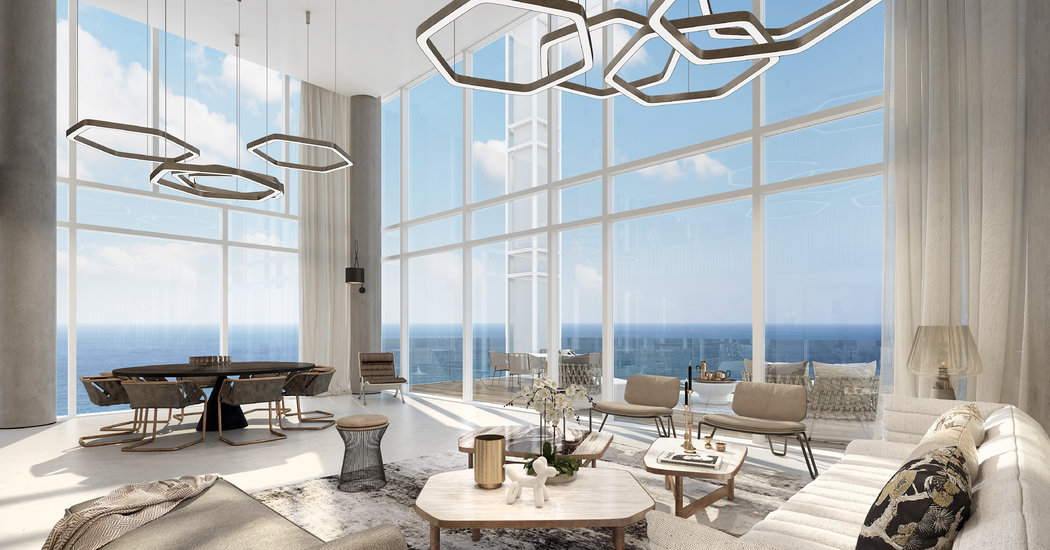 TEL AVIV — Walk south along the Tel Aviv shoreline these days, and you’ll hear the reverberations of a constant low thwacking. It’s not the sound of dozens of scantily clad locals playing matkot (beach paddle ball) on the sand, although they’re there every day. It’s the sound of construction on high-rises, condos and luxury hotels — all sprouting up, in towering variations of steel and stone and glass, along a half-mile stretch of beach.

So many new buildings have been erected along this strip, and at such high prices, that real estate agents are calling it the Golden Kilometer.

A decade ago, this sliver of land was the city’s only undeveloped patch open to the sea. Running from the landmark Opera Tower, a 23-story beachfront monolith that has seen better days, down to Banana Beach, a laid-back sunbathing patch with a volleyball court and beachfront bar, it was blighted by construction sites, empty lots and low-slung buildings. Today, local agents estimate that the value of real estate transactions on this stretch reached more than $1 billion in the past decade.

There’s the Royal Beach Residences at Hayarkon 19, where a four-bedroom apartment was recently on the market for about $8 million. There’s Herbert Samuel 48, a multifamily townhouse by the architect Ilan Pivko, consisting of three duplexes and one triplex, topped with an infinity pool and offered at $45 million. There’s 10 Herbert Samuel, where a 19th-floor apartment with panoramic sea views was recently sold for $20 million. And there’s the David Promenade Residences, a 28-story tower that is still being built, where apartments on lower floors run from $3 million to $12.25 million, and duplex penthouses are being offered for as much as $46.7 million.

In a city where the most recent Israeli census put the average household income at about $4,900 a month, these prices can feel as out of reach as the penthouses themselves.

“Tel Aviv is a very small city — it’s the size of Manhattan. And the beach, which is our No. 1 asset, is only 14 kilometers long,” said Eytan Schwartz, the chief executive of Tel Aviv Global, an initiative of the Tel Aviv Municipality working to elevate the city’s international standing. “When you have a chronic shortage of housing and high real estate prices meeting in an extremely desirable city — which happens to also be the center of the nation’s economy — you have a very active high-priced real estate market.”

Housing prices across Israel have increased by more than 80 percent over the past 10 years, while more than 20 percent of Israelis live below the poverty line, according to the nation’s Central Bureau of Statistics. Average prices on common consumer goods are among the highest in the Organization for Economic Cooperation and Development, an international group of free-market democracies. The high prices led to nationwide protests — dubbed the “Cottage Cheese Protests” because of the inflated cost of that breakfast staple and other food items — in 2011.

The arrival of multinational tech companies brought with it a new upper class (Google came in 2006, Amazon in 2014 and Alibaba in 2017), but most Israelis still live paycheck to paycheck. No matter, said Noam Dzialdow, who works with the high-end real estate agency Neot Shiran. That’s because the majority of properties on the Golden Kilometer are being built with foreign Jewish buyers, not native Israelis, in mind.

“We know that most of the buyers in this project have second homes in major cities around the world,” said Mr. Dzialdow, referring to the David Promenade Residences. The building’s Penthouse 24, which is under construction, will occupy 9,427 square feet across two floors, plus an additional 3,982 square feet of balcony space with a private plunge pool. Its floor-to-ceiling windows will offer sweeping views of the waves below.

“There are investors all over the world, and Jews always want to have a place in Israel,” he added.

The David Promenade is next to the forthcoming Kempinski Hotel, and residents will have access to all the hotel’s amenities, including room service, housekeeping and a spa. And while those perks are attractive, another factor is prompting Tel Aviv’s real estate rush: fear. The recent rise of hate crimes against Jewish men and women, both in Europe and across the United States, has prompted many foreign Jewish buyers to purchase property in Israel.

Owning property in the Jewish state, which offers automatic citizenship to anyone who can prove Jewish ancestry, feels like a strong safety net, said Shoshi Kahtan Gentely, the director of Israel Property Network.

“Anti-Semitism is on the rise, and people are scared, so they’re buying,” she said. “More and more Jews are buying properties in Israel. And the properties along the beach are the crème de la crème of Tel Aviv living, so while the pool of buyers for those is tiny, they do sell.”

One of those buyers is Gabi Tamman, 87, who was born in Egypt in 1932 and is well acquainted with running from anti-Semitism. As a boy, his family fled from Cairo to Sudan and then to Europe, where they eventually settled. Today, Mr. Tamman is a Geneva-based multimillionaire, and five years ago, when he purchased a three-bedroom, three-bath apartment at Herbert Samuel 10 along the Golden Kilometer, it helped him realize a lifelong goal.

“It’s been a long, old dream of mine to own a home in Israel, and I wanted to make it realized,” Mr. Tamman said in a phone call from Geneva. He customized the interior of the home, installing two kosher kitchens (one for his family and one for guests), as well as a private boudoir for his wife, Nina, with windows offering unobstructed sea views.

Mr. Tamman uses the apartment for two or three months a year, coming to Tel Aviv for Passover and other Jewish holidays, but it is rarely vacant — children, grandchildren and cousins of the extended Tamman family also use it as a home base for their own travels.

He has additional homes in Monaco and London, but his Tel Aviv retreat, he said, is special for one reason: It is surrounded by other Jewish residents.

For Sylvan Adams, a Canadian-born billionaire, an investment on the Golden Kilometer served a greater purpose: It sealed the deal for a permanent move to Israel. He and his wife, Margaret, immigrated to Israel in 2015 and settled in the $35 million penthouse at Herbert Samuel 10, a few floors above Mr. Tamman.

Mr. Adams, who successfully lobbied for the 2018 Giro d’Italia bicycling race to be held in Israel, is a co-owner of the Israel Cycling Academy and a cycling enthusiast. Among the custom installations in the penthouse are an air-pressurized living suite that simulates altitude training, a gym with adjustable inclines for a number of stationary bicycles and a cryotherapy spa.

But the wraparound open-air balcony, he said, is his favorite spot of all.

“All I wanted was the terrace, but it came as a package deal with two floors, so I had to take it all,” Mr. Adams said. “Waking up in the morning and finishing the day in front of such a spectacular view made the decision for me, in terms of the location.”

Leo Zauberman, an architect who worked with Ilan Pivko on the $45 million townhouse at Herbert Samuel 48, said he is willing to wait as long as necessary for the right buyer for his project.

“I think this home is meant for a foreign family,” said Mr. Zauberman, who grew up in France and spent many long visits in Israel before deciding to formally immigrate. “There are many people who want to buy a second home in Tel Aviv. They’ll buy it, and after they come enough, they’ll start to think about living here forever.”

Budget airline Ryanair says it will ground nearly all flights from...

Taal Volcano Eases, but Philippines Worries Worst Is to Come