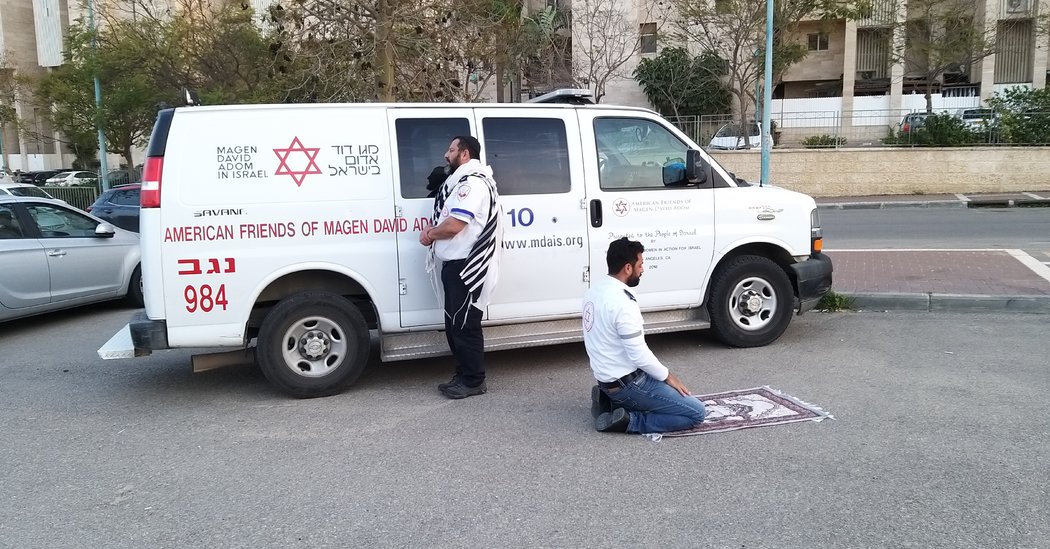 JERUSALEM — The Israeli ambulance system normally fields about 6,000 calls a day. Since the coronavirus crisis began, it has been averaging an astounding 100,000 calls a day.

In the southern town of Beersheba, a pair of emergency medical technicians were about 40 minutes into their shift on Tuesday afternoon when things suddenly grew quiet. No panic attacks, no elderly people running out of medicine, no kitchen accidents involving people stuck at home.

So they stepped out of the ambulance to pray.

Avraham Mintz, 43, a Jew from Beersheba, wrapped himself in his prayer shawl and turned north toward Jerusalem. Zoher Abu Jama, 39, an Arab from nearby Rahat, unfolded his prayer rug and knelt facing south toward Mecca.

A co-worker snapped and posted a picture, which appeared to strike a chord far and wide.

But the two men said their back-to-back worship was nothing new.

“We try to pray together, instead of each one of us taking the time for himself, because we have a lot of situations we’re dealing with right now,” Mr. Mintz said. Five people have died of the virus in Israel so far and one in the occupied West Bank.

“The whole world is battling this,” Mr. Abu Jama added. “This is a disease that doesn’t tell the difference between anybody, any religion, any gender. But you put that aside. We work together, we live together. This is our life.”

Mr. Abu Jama said he’d had his aging mother in mind as he prayed: She is frail, and he has been keeping his distance from her even though they live under the same roof. Mr. Mintz said he had asked God “to let me see the end, the good end. Because I know that it’s a good end. And I hope to be there.”

For Shut-In Pilgrims, the World’s Holiest Sites Are a Click Away

Another One Bites The Dust: Disney's Mulan And More Have Now...

Now Is the Time to Take Care of Your Lungs. Here’s...

People On The Internet Are Obsessed With The Rock's Super Bowl...

Behind the Russia-Saudi Breakup, Calculations and Miscalculations