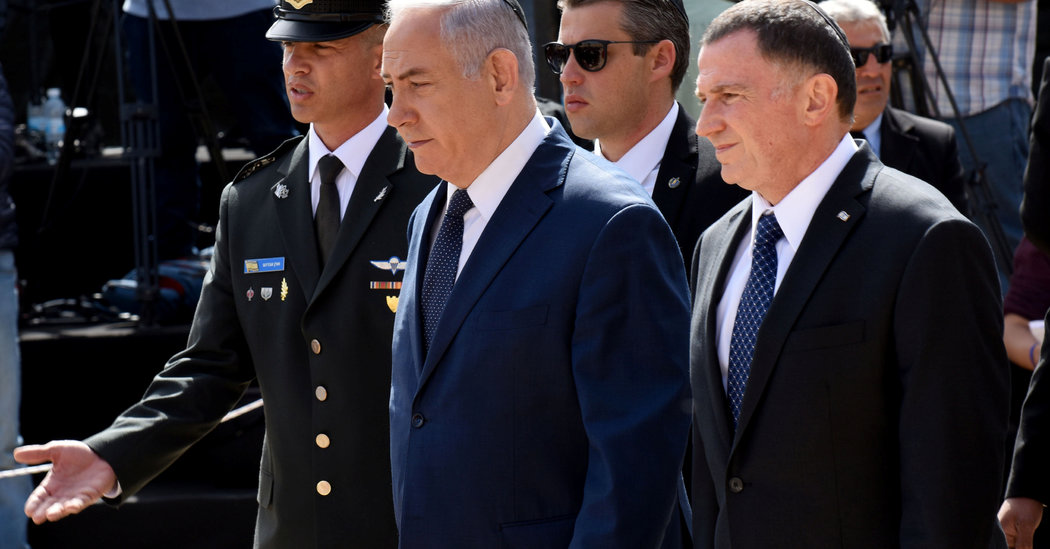 JERUSALEM — The speaker of Israel’s Parliament, Yuli Edelstein, a staunch ally of Prime Minister Benjamin Netanyahu, abruptly resigned on Wednesday rather than comply with a Supreme Court order that would allow lawmakers to choose his successor.

The move will allow Benny Gantz’s opposition Blue and White party and other opponents of Mr. Netanyahu to take control of the legislative process. They have threatened to enact laws that could bar Mr. Netanyahu from a new term in office.

In a parting gift to the embattled prime minister, however, Mr. Edelstein said his resignation as the Knesset speaker would become effective only on Friday, ensuring that anti-Netanyahu lawmakers would have to wait until the coming week to assert their newfound power.

The machinations, which came as hundreds of protesters with black flags demonstrated and shut down traffic outside Parliament, did not end there: Blue and White said that since Mr. Edelstein’s resignation had not taken effect yet, his refusal to allow a vote on a new speaker amounted to contempt of court.

Even Israel’s president, Reuven Rivlin, weighed in, rebuking Mr. Edelstein in a prime-time address: “It is the duty of every one of us to obey the rulings of the courts,” he said, adding that, “even if someone is of the opinion that the court is wrong in its conduct, whatever the disagreement between us, we must always ensure that the rules of democracy, without which we are destroyed, are upheld.”

The resignation of Mr. Edelstein, 61, a refusenik who spent three years in a Soviet prison before immigrating to Israel in 1987 and who had led Parliament since 2013, appeared to defuse a constitutional crisis that had been brewing for weeks, but it left Israel still no closer to resolving its long political deadlock.

Opponents of Mr. Netanyahu, whose caretaker government remains in control of the state machinery, won a slim majority in parliamentary elections on March 2 — the country’s third straight inconclusive ballot in the past year.

Their leader, Mr. Gantz, has a limited window to form a government and has made overtures to Mr. Netanyahu and his Likud party about joining a unity coalition, among other things, citing the emergency posed by the coronavirus outbreak. But Mr. Netanyahu has insisted that he remain prime minister in any case.

To pressure Mr. Netanyahu, who is awaiting trial on corruption charges including bribery and fraud, Mr. Gantz and his allies want Parliament to enact legislation that could prevent Mr. Netanyahu from running if the country is forced into a fourth election.

But Mr. Edelstein, a member of Mr. Netanyahu’s conservative Likud party, stood in the way. Citing the virus, Mr. Edelstein first disbanded Parliament last week and then let it reconvene, but said he would not allow a vote to choose a new speaker.

On Monday, the Supreme Court declared that Mr. Edelstein’s stance “undercuts the foundations of the democratic process” and ordered him to relent by Wednesday.

Some Likud ministers accused the court of a “judicial coup” and urged Mr. Edelstein to defy the ruling. But he demurred.

“As a democrat, as a Zionist Jew, as someone who fought dark regimes, and as chairman of the House, I will not let Israel deteriorate into anarchy,” he said in a statement. “I will not enable a civil war.”

He denounced the high court’s ruling as a “one-sided, extreme interpretation” of the law that “undermines the foundations of Israeli democracy,” but said he was resigning “for the good of the State of Israel and to renew the spirit of statesmanship.”

He added, “We will pray and work for better days.”

Critics of the high-stakes brinkmanship warned that it was undermining bedrock political institutions. Yohanan Plesner, president of the Israel Democracy Institute, said Likud’s calls to disregard the Supreme Court’s order reflected “a new low point in our democracy and could send a dangerous signal to the public that court rulings are not binding or mandatory.”

Though Blue and White’s takeover of Parliament will give Mr. Gantz added leverage against Mr. Netanyahu, Israel’s longest-serving prime minister, he is well entrenched and has plenty of ammunition with which to fight to retain power.

Mr. Gantz’s 61-seat majority in Parliament rests on the support of 15 lawmakers from the predominantly Arab Joint List. When several provisional committees were formed on Tuesday, the Joint List was given the chairmanship of two: one on labor and welfare, and a second on reducing crime and violence among the Arab population.

Mr. Netanyahu’s allies immediately blasted the Joint List’s control of the labor and welfare committee on the grounds that the committee, in its permanent form, oversees matters involving wounded military veterans and victims of terror. Blue and White dismissed such criticism, saying the special committee would be focused on ameliorating the effects of the coronavirus on Israel’s work force and those below or near the poverty level.

Though the replacement of Mr. Edelstein as speaker appeared to be just a matter of time, analysts said the broader political stalemate showed no sign of easing and was growing more acute under the strain of fighting the coronavirus.

Amnon Reichman, a professor of public law at the University of Haifa’s Minerva Center for the Rule of Law under Extreme Conditions, said that Israeli democracy remained “under stress,” and pointed to Mr. Netanyahu’s use of emergency ordinances to address the health emergency, a measure he called drastic.

“If we were to use a matrix of green, yellow, orange and red, I’d say we are entering the orange stage,” he said.

Putin and Erdogan Reach Accord to Halt Fighting in Syria

Does the Australian Open Come Too Early?

Amid the Coronavirus Crisis, Heart and Stroke Patients Go Missing

Aston Villa, Cup Competitions and the Relativity of Meaning