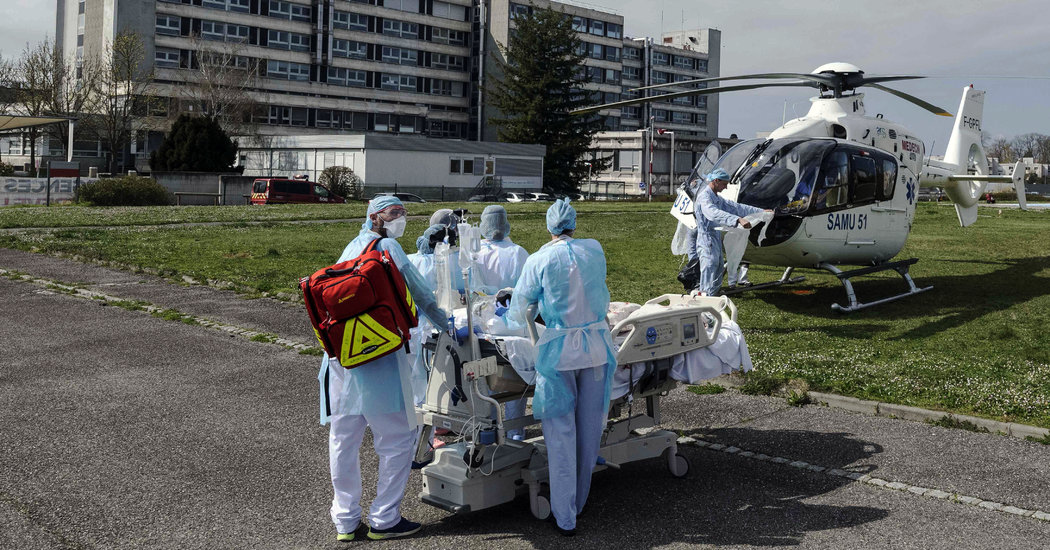 PARIS — One of the world’s best health care systems is facing its severest test ever, and whether it succeeds will say much about the ultimate adequacy of a well-funded, well-equipped and broadly accessible national treatment plan.

If France’s experiment in confining its citizens — less rigorous than the Chinese, more precocious than the Italian, far more organized than the American — yields the hoped-for flattening of the curve, it would be vindication not just for the underlying system, but for a Western democracy’s organized effort to combat the coronavirus. The verdict is still weeks away.

President Emmanuel Macron has told the French, over and over, that the country is “at war.” On the surface, it is going into battle well prepared.

France spends more on health than most of its developed-world peers, offers world-beating access to doctors at less cost, and encourages all its citizens, through universal government-funded coverage, to keep track of their conditions. It has twice the number of intensive care beds that Italy has.

Mr. Macron has not been shy about touting the virtues of that system, especially in comparison with the United States.

“What this pandemic is showing, right now, is that free health care, without regard to income, career, or profession, our welfare state, these are not costs or burdens, but precious assets when fate strikes,” Mr. Macron said in a televised address to the country two weeks ago.

“What the pandemic shows is that there are goods and services which must be protected from the laws of the market,” he added.

But with coronavirus cases doubling every four days, even France’s relatively luxurious system is creaking and straining. A week into France’s total lockdown — little stirs on the echoing streets of Paris and the normally traffic-bound Place de la Concorde is now an empty windswept plaza — there are no signs of a letup in the intensity of the epidemic.

“For France, this is a crash test of our system,” said François Bricaire, an infectious disease specialist at the National Academy of Medicine. It is small comfort to the French that the coronavirus numbers in their country are well below those in Italy and Spain, for the moment. By Thursday, 1,696 had died in the hospitals — in Italy, deaths were at 6,077 — more than 3,000 were in critical condition, and there were more than 29,000 known infections.

“Our centralized system is perhaps better adapted than the Italian to an epidemic,” Mr. Bricaire said, adding, “The decisions made in Paris are immediately circulated around the country.”

But the authorities may be significantly underestimating the number of dead in France.

“The hospital deaths represent only a small portion of the mortality,” the French national health director Jérôme Salomon told journalists Tuesday night. In particular, more and more deaths in nursing homes, not counted so far in the official tallies, are coming to light, particularly in eastern France — 16 in Haute-Marne, seven in Haute-Savoie, 20 in Vosges.

Another 16 died in a Paris nursing home, according to French news reports.

Overstretched hospitals in Alsace, the hardest-hit region by far, have had to send out patients by military planes to less affected regions, and even in a “medicalized” train. A conference of 2,000 evangelical Christians at Mulhouse in February, where an unknown but significant number of those there were infected, has had the effect of a coronavirus bomb, first on Alsace, and then on all of France, as the participants spread throughout the country.

“We’re at the limit of our capacities,” Jean Sibilia, dean of the medical faculty at Strasbourg University, said. “As long as we’re doubling cases every four days, you can just imagine the load,” he said.

Hospitals in Alsace are so full the French Army has had to scramble to set up a field hospital.

“What we’re living through here is completely exceptional,” said Jean-François Cerfon, an emergency room doctor in the eastern town of Colmar. “A massive influx of patients, over a short period, and they’re in for the long haul. Let’s just hope that by July we’re out of this nightmare.”

Now, amid the same bitter debates taking place in other countries — opposition politicians are asking whether officials were prepared, why stocks of masks were not higher, and whether Mr. Macron moved fast enough — the government is holding its breath about whether the robust French system can hold. The debates have been muted though, because public anxiety has so far outweighed the country’s strong attachment to individual liberties.

There are no guarantees. “No system can hold indefinitely,” said Philippe Juvin, head of the emergency room at Hôpital Européen Georges-Pompidou in Paris. ‘‘There’s always a moment when the wave is too big,” he said.

“It’s going to be a test of organization, and a human test,” he added, noting that the wave of patients arriving at hospitals in critical condition was growing. “Will we have the capacity to hold up?”

Weeks of protests by hospital personnel, before the crisis, over too-long hours and overstretched personnel underscored the health system’s low morale.

Others are trying to put on a brave face. “The teams are holding up well,” said Martin Hirsch, the director of Paris hospitals. “They have extraordinary capabilities.”

Yet the capital is hovering near its critical-care bed limit of 1,200, and Mr. Hirsch told French news media on Wednesday that he could “only see three days ahead.”

Mr. Hirsch, a veteran health official, also has acknowledged the giant unknown. “How can you talk about facing up to something that we have never even known before?” he said in a telephone interview.

For weeks, France thought it could escape Italy’s fate even as it kept a wary eye on its neighbor. The initial measures were limited — closing schools in the rural Paris exurbs and in the northwestern region of Brittany, where some cases had been noted, and banning gatherings of more than 1,000.

On March 6, with nine dead already, Mr. Macron went to the theater, partly to show the French that normal life could continue. But five days later, he closed the schools, and two days after that, bars, restaurants and “nonessential” businesses.

Still, he allowed the first round of Paris’s mayoral election to go ahead on March 15. On that sunny Sunday, thousands of French crowded the city’s parks and cafes.

Mr. Macron ordered them to remain in their homes the next day.

With this action, France put itself in a more favorable position than Italy. The confinement order began when just 148 were dead. The Italian government, by contrast, waited until the death toll was over 800 before ordering a national lockdown.

“Sick patients who could have been saved were not, because the Italian health system was saturated,” said William Dab, a former French national health director. He added, “In France, we are still able to save patients who are in intensive care.”

There has been resistance to the confinement in the immigrant suburbs, where restless residents are crammed into inhospitable tower blocks. Police officers have already handed out tens of thousands of fines.

The authorities say they have no choice but to continue. The stakes are too high.

“The measures that have been adopted, they are our last chance to overcome this crisis democratically,” Mr. Dab said. “To show we can overcome this without authoritarianism, without dictatorship, that a democracy can overcome a crisis like this.

Zion Williamson Is Back. Will His Knee Hold Up?

Tom Hanks Quotes A League Of Their Own In Coronavirus Update

Marie Antoinette’s private garden at Versailles is being restored

The best decorative cushions to brighten up your house

Trump Suggests Daily Briefings No Longer Worth His Time as White...

What to Know to Find the Best Running Shoes: 6 Myths...

I Didn’t Feel Parisian Until I Escaped Paris

A New Era for the Berlin Film Festival, With Two at...