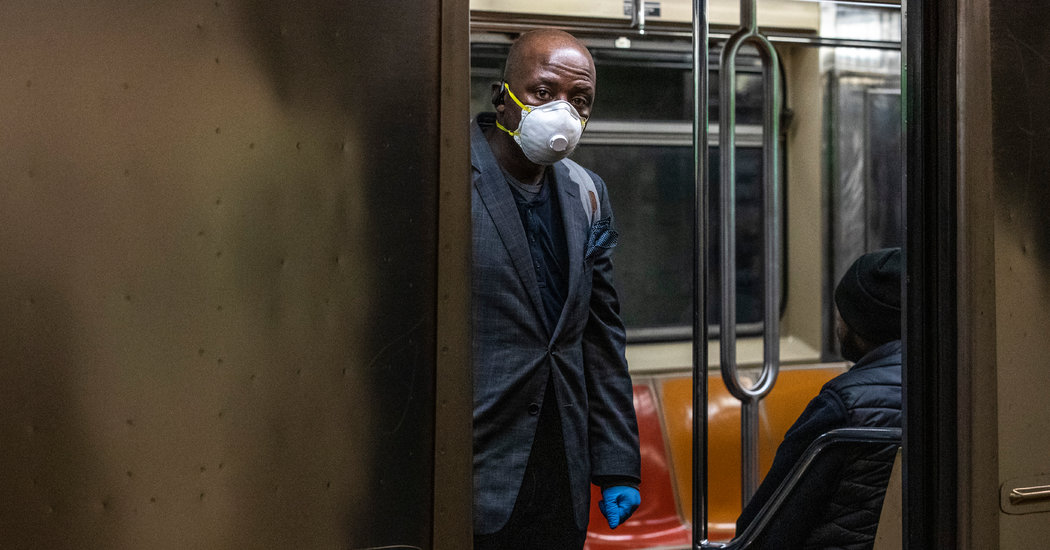 As the coronavirus pandemic rages on, experts have started to question official guidance about whether ordinary, healthy people should protect themselves with a regular surgical mask, or even a scarf.

The World Health Organization and the Centers for Disease Control and Prevention continue to state that masks don’t necessarily protect healthy individuals from getting infected as they go about their daily lives.

The official guidance continues to recommend that masks should be reserved for people who are already sick, as well as for the health workers and caregivers who must interact with infected individuals on a regular basis. Everyone else, they say, should stick to frequent hand-washing and maintaining a distance of at least 6 feet from other people to protect themselves.

But the recent surge in infections in the United States, which has put the country at the center of the epidemic, with more confirmed cases than China, Italy or any other country, means that more Americans are now at risk of getting sick. And healthy individuals, especially those with essential jobs who cannot avoid public transportation or close interaction with others, may need to start wearing masks more regularly.

“The swift increase in cases to these levels in the U.S. highlights to an even greater degree the importance of implementing and adhering to public health measures,” said Dr. Robert Atmar, an infectious disease specialist at Baylor College of Medicine.

While wearing a mask may not necessarily prevent healthy people from getting sick, and it certainly doesn’t replace important measures such as hand-washing or social distancing, it may be better than nothing, Dr. Atmar said.

There is very little data showing that flat surgical masks, in particular, have a protective effect for the general public. Masks work by stopping infected droplets spewing from the wearer’s nose or mouth, rather than stopping the acquisition of virus from others. That is why the W.H.O. and C.D.C. recommend that people already infected with the coronavirus wear masks, to protect others who may come into close contact with them. Health workers wear masks because they interact with sick patients regularly and often have to lean close for important medical procedures, exposing themselves to higher amounts of viral particles. And if healthy individuals start stockpiling surgical masks and high-grade N95 masks, they can also make it harder for health workers to get the resources they need to help on the front lines.

But studies of influenza pandemics have shown that when high-grade N95 masks are not available, surgical masks do protect people a bit more than not wearing masks at all. And when masks are combined with hand hygiene, they help reduce the transmission of infections.

When researchers conducted systematic review of a variety of interventions used during the SARS outbreak in 2003, they found that washing hands more than 10 times daily was 55 percent effective in stopping virus transmission, while wearing a mask was actually more effective — at about 68 percent. Wearing gloves offered about the same amount of protection as frequent hand-washing, and combining all measures — hand-washing, masks, gloves and a protective gown — increased the intervention effectiveness to 91 percent.

With the current coronavirus, researchers are also finding that there are more asymptomatic cases than were known early on in the pandemic. Classified data from the Chinese government that was reported in the South China Morning Post indicated that up to a third of all people who tested positive for the coronavirus could have been silent carriers. Widespread testing on the Diamond Princess showed that half of the positive cases on board the cruise ship had no symptoms. And officials in Iceland, who have tested a high proportion of citizens in the country, have found similarly high percentages of asymptomatic infection.

A new report from the C.D.C., published Friday, also suggests that several residents of a nursing facility in King County, Washington, either did not have any symptoms or developed very mild symptoms only after they had been confirmed to have a coronavirus infection.

Since identifying and isolating people with infections plays a major role in breaking the chain of transmissions, people who do not have any symptoms or do not develop symptoms until later may continue to inadvertently spread the disease.

“It’s still hard to tell what percentage of people are truly asymptomatic because many go on to develop symptoms a few days later,” said Dr. Neil Fishman, the chief medical officer of the University of Pennsylvania Health System. “What we do know is that individuals can shed virus about 48 hours before they develop symptoms and masking can prevent transmission from those individuals.”

Wearing a mask can also reduce the likelihood that people will touch their face, which is another mode of transmission of the virus from contaminated surfaces to unsuspecting individuals, Dr. Fishman said.

“For individuals working in certain essential industries, where they still have to go out every day, I think wearing a mask makes sense,” Dr. Fishman said.

In many Asian countries, everyone is encouraged to wear masks, and the approach is about crowd psychology and protection. If everyone wears a mask, individuals protect each other, reducing overall community transmission. The sick automatically have one on and are also more likely to adhere to keeping their mask on because the stigma of wearing one is removed.

Masks are also an important signal that it’s not business as usual during a pandemic. They serve as a visual reminder to improve hand hygiene and social distancing. They may also serve as an act of solidarity, showing that all citizens are on board with the precautionary measures needed to bring infections under control. And places like Hong Kong and Taiwan that jumped to action early with social distancing and universal mask wearing have gotten their cases under much greater control.

“If everyone in the community wears a mask, it could decrease transmission,” Dr. Fishman said. “But unfortunately I think that we don’t have enough masks to make that effective policy in the U.S.”

Trump Slammed the W.H.O. Over Coronavirus. He’s Not Alone.

Did Ezra Miller's Movie Flash Just Get His Nickname In The Weirdest Way Possible?

Caught Between Worlds? For Elizabeth Acevedo, It’s a Familiar Feeling

Coronavirus May Pose a New Risk to Younger Patients: Strokes