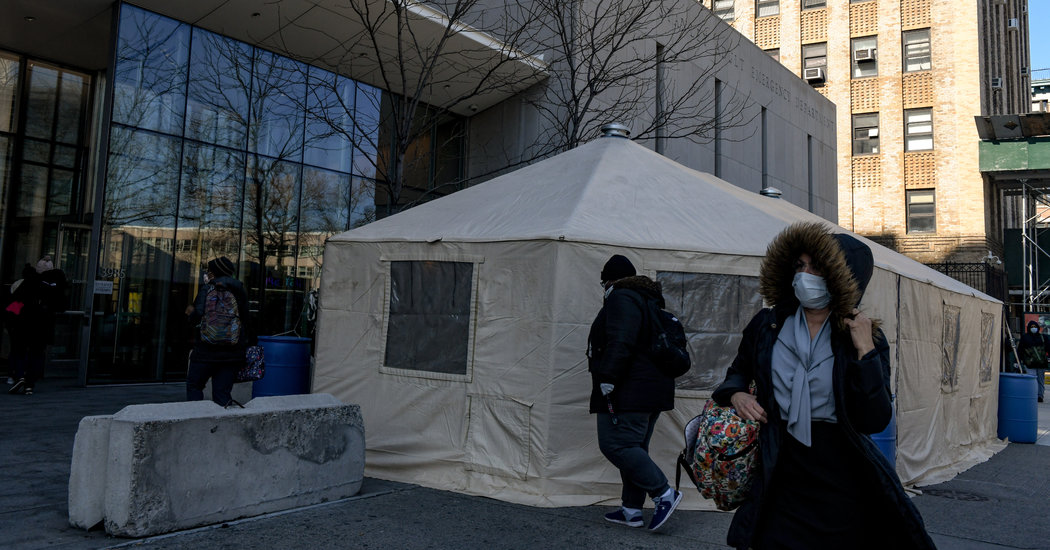 As coronavirus continues to spread across the globe, we’re working to answer the questions on many parents’ minds. This is a fast-moving situation, so some information may be outdated. For the latest updates, read The New York Times’s live coronavirus coverage here.

The two women showed no signs of infection when they arrived last week at a top New York City hospital to deliver their babies.

But soon after the babies were born, the mothers’ conditions “deteriorated very quickly,” and they were admitted to the intensive care unit, said Dr. Mary D’Alton, the chief obstetrician and gynecologist at the NewYork-Presbyterian/Columbia University Irving Medical Center in Manhattan.

The women had undetected Covid-19, and more than 30 health care workers were exposed to the coronavirus before the women were diagnosed — prompting the NewYork-Presbyterian hospital network to bar partners and other support people from labor and delivery rooms, a policy that was implemented on Monday for all its maternity patients.

The babies do not seem to have contracted the virus so far. One of the mothers was discharged four days after delivering, but the other mother remains hospitalized.

“That was an excruciating decision for us,” Dr. D’Alton said of the no-support person policy. “It was not taken lightly, it was not taken by one person. It was taken by a team of us involved in multidisciplinary levels across the institution.” She said the hospital must assume there are many people who have been infected with the virus, including some who are not sure how or where they became infected.

The members of the team who were exposed to the virus — doctors, residents and nurses — are self-monitoring for any signs of the disease, she said.

On Monday, NewYork-Presbyterian, where about 25,000 infants are delivered each year, instituted Covid-19 testing for all patients admitted to the obstetrical service and also began barring partners, family members and other support people from the delivery room and postpartum recovery areas.

The policy bars partners from seeing the babies in person until the mothers are discharged.

The no-visitor policy frightened some expectant mothers who had planned to labor with a birth partner by their side and fueled criticism from midwives, doulas and other health care professionals. A petition to reverse the policy has drawn more than half a million signatures.

Details about the two cases at Columbia were presented in a paper published online on Thursday in the American Journal of Obstetrics & Gynecology MFM. According to the paper, the two women were the only ones admitted to the I.C.U. out of seven pregnant women at Columbia who were confirmed to have Covid-19.

Both of the women admitted to the I.C.U. were induced at 37 weeks and did not become symptomatic until after they delivered their babies, the paper said. They also had underlying health problems: One was diagnosed with type 2 diabetes mellitus and intrahepatic cholestasis of pregnancy, a pregnancy-related liver disorder, and the other with chronic hypertension.

The authors concluded that these case studies suggest “a need for immediate changes in obstetric clinical practice,” adding that “it is reasonable to suspect that asymptomatic Covid-19 presentations are common and represent a substantial contribution to disease spread.”

The NewYork-Presbyterian hospital network, like many other hospital systems, has struggled with a lack of personal protective equipment like goggles and masks.

“Clearly we don’t have enough and we’re conserving P.P.E.,” Dr. D’Alton said, adding her hospital has to be “very sparing in our use.”

According to the case study, until adequate supplies exist, “we can reasonably expect our obstetrical and anesthesiology providers to become ill and exit the work force at an accelerated rate.”

Aside from Staten Island University Hospital, the other hospitals in the Northwell network are still allowing support partners, Dr. Michael Nimaroff, senior vice president and executive director of ob-gyn services at Northwell Health, said on Thursday.

“We do allow some of our institutions, due to their own unique staffing and base constraints, to have slightly different, and their own individual, policies,” he said.

He added: “But as a general rule, our leadership has been very supportive of us continuing to allow the support person. We understand how important that is for a couple.”

Three pregnant women who have tested positive for Covid-19 have been admitted to the I.C.U. at Long Island Jewish Medical Center and North Shore University Hospital, said Dr. Michael Nimaroff.

The women are in their third trimesters and have not yet gone into labor, Dr. Nimaroff said.

“We believe still that the majority of pregnant patients do well and have mild symptoms similar to someone who is not pregnant,” Dr. Nimaroff said. “But the question remains: Is there an increase of incidents of more severe infections in women who are pregnant? That’s the question we are trying to answer.”

Elsewhere in the country, hospitals are still allowing at least one visitor in labor and delivery rooms. U.W. Medical Center in Washington State is considering instituting a policy similar to that of NewYork-Presbyterian to test all pregnant women for Covid-19 upon arrival to labor and delivery.

“The rapid physiologic changes that can take place on labor and delivery may, in combination with Covid, lead to a more rapid and more severe deterioration than we might otherwise see,” said Dr. Catherine M. Albright, an obstetrician there.

One of the difficulties in instituting that policy, though, is that the current tests take at least a few hours to deliver results.

“To me this speaks to the need to develop a rapid test so that we can test everyone who comes into the hospital for admission,” Dr. Albright said.