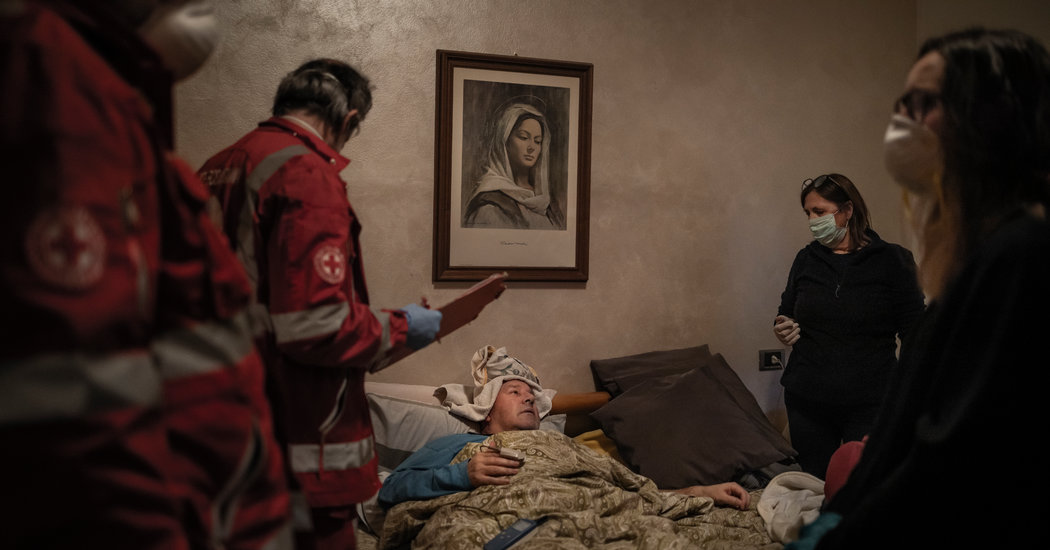 The streets of Bergamo are empty. As in all of Italy, people can leave their homes only for food and medicines and work. The factories and shops and schools are closed. There is no more chatting on the corners or in the coffee bars.

But what won’t stop are the sirens.

While the world’s attention now shifts to its own centers of contagion, the sirens keep sounding. Like the air raid sirens of the Second World War, they are the ambulance sirens that many survivors of this war will remember. They blare louder as they get closer, coming to collect the parents and grandparents, the keepers of Italy’s memory.

The grandchildren wave from terraces, and spouses sit back on the corners of now empty beds. And then the sirens start again, becoming fainter as the ambulances drive away toward hospitals crammed with coronavirus patients.

“At this point, all you hear in Bergamo is sirens,” said Michela Travelli.

On March 7, her father, Claudio Travelli, 60, was driving a food delivery truck all around northern Italy. The next day, he developed a fever and flu-like symptoms. His wife had run a fever in recent days, and so he called his family doctor, who told him to take a common Italian fever reducer and rest up.

For much of the prior month, Italian officials had sent mixed messages about the virus.

On Feb. 19, some 40,000 people from Bergamo, a province of about a million people in the region of Lombardy, traveled 30 miles to Milan to watch a Champions League soccer game between Atalanta and the Spanish team Valencia. (The mayor of Bergamo, Giorgio Gori, this week called the match “a strong accelerator of contagion.”) Mr. Travelli and his wife didn’t take the threat of the virus seriously back then, their daughter said, “because it wasn’t sold as a grave thing.”

But Mr. Travelli could not shake his fever, and he got sicker.

On Friday, March 13, he felt unbearable pressure on his chest and suffered dry heaves. His temperature spiked and his family called an ambulance. An ambulance crew found her father with low levels of oxygen in his blood but, following the advice of Bergamo’s hospitals, recommended he stay home. “They said, ‘We have seen worse, and the hospitals are like the trenches of a war,’” Ms. Travelli said.

House Hunting in Nicaragua: A Solar-Powered Ranch for $650,000

Locker Rooms Are Petri Dishes. Can the N.F.L. Clean Up Before...

6 Spider-Man Characters We'd Like To See Get Their Own Spin-Off...

Black Widow: 8 Key Things We Know About Natasha Romanoff Before...

A Gorgeous Center for Photography, Far From Picture Perfect