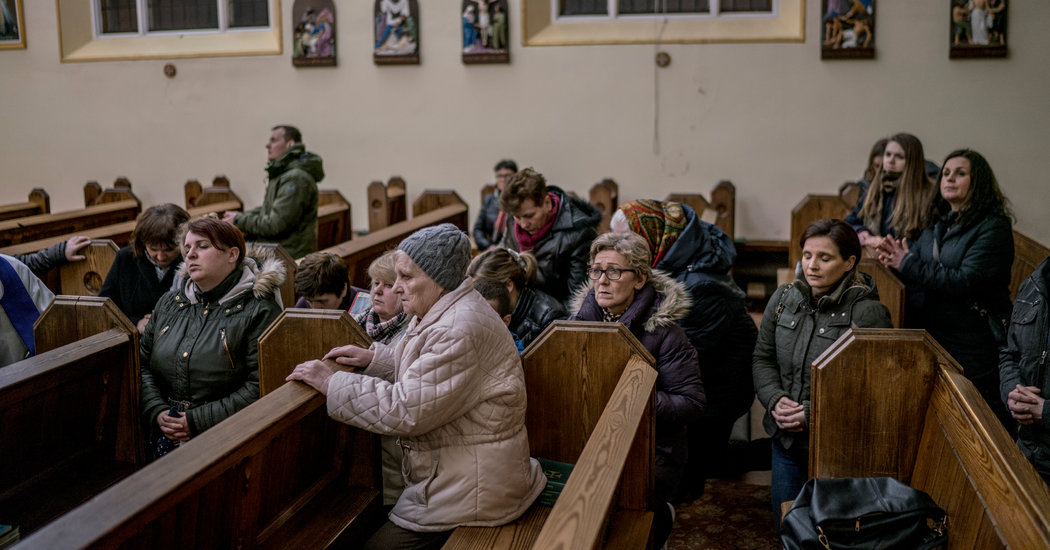 LONDON — As the coronavirus epidemic gathered pace, Jaroslaw Bacdorf agonized over whether to stay in London, where he has lived and worked for eight years, or head back to Poland to join his wife, children and mother.

After a morning phone call on Wednesday, he packed his bags.

“I spoke to my mum and my kids,” said Mr. Bacdorf standing in an eerily deserted terminal building at London City Airport, his baggage already checked, just a few hours after that conversation.

“My mum said, ‘Come home, you don’t know what will happen in a week, two weeks, or three weeks,’” he said.

In recent weeks, as countries across the world have closed their borders or set down stringent entrance requirements, many people have found themselves stranded abroad, forced to choose where, and with whom, they want to be at a time of crisis and anxiety.

In Britain, home to more than 800,000 Poles, thousands have taken repatriation flights, concerned with a relatively slow British response to the crisis and worried about the state of the country’s austerity-weakened health service.

Mr. Bacdorf’s flight was almost the last to depart London City Airport before it closed to civil aircraft, to accommodate the military as it helps equip a 4,000-bed temporary hospital nearby — a symbol of the government’s last-minute scramble to cope with the challenge.

To many Poles the British reaction to the threat has been too slow — complacent even — compared with things back home. “The Polish government seems to be much more strict in its response,” said Mr. Bacdorf, 44, a tall, bearded and good-humored information technology expert. “Here in Britain, I would call it a joke.”

“Even today, when I did some final shopping, people were gathering in their gardens, drinking wine,” he added.

He said he had planned to stay in London for another two years, traveling regularly back to see his family, but was leaving now that his workplace in London had shut.

“Paracetamol for everything — that’s my impression of what you get from the British health service,” he added, referring to the pain reliever Americans generally know as acetaminophen or Tylenol.

In Poland, a country of around 38 million people (compared with the United Kingdom’s 66 million), the virus appears to have been well-contained so far, with around 1,289 reported infections and 16 deaths — significantly fewer than the U.K.’s 17,089 cases as of Saturday and 1,019 deaths.

Restrictions in Poland came faster. On March 15, the government suspended international flights and rail travel, closing itself off from almost all foreigners. Britain, by contrast, still has flights arriving from virus hot spots, including Iran.

Poland banned gatherings of more than two people, excluding families, confined citizens to their homes except for essential activities, and limited religious services — including funerals — to five people. It reduced the numbers permitted to ride buses and trams so that half the seats are unoccupied.

To get home, Polish citizens have been using special repatriation flights operated by the national carrier, LOT, and, on arrival must undergo a compulsory 14-day home quarantine.

In just the first five days of that service, around 12,000 Poles used it to leave Britain, according to the Polish embassy in London. LOT said that in the first 11 days of the program, it had made 266 such flights from around the world — more than one-third of them from London, in addition to some that had left Britain from Edinburgh.

The repatriation flights are expected to continue until April 5, though after that date, Poles will still be able return home by car or bus.

Early on in the program, officials say, there was a minor panic as people saw little action in Britain and heard about drastic measures in Poland. Later, when Britain did finally instruct people to stay at home, businesses suddenly closed and many Poles lost their jobs, particularly in the hospitality sector, leaving them feeling they had little choice but to return home.

Some left reluctantly. Bartosz Zatorski, a student, whose part-time job in Manchester ended just as his lectures moved online, is more positive than Mr. Bacdorf about Britain’s health system and was impressed by the government’s pledges to give it whatever resources it needs.

“I hope to be back in September,” said Mr. Zatorski, 21, smoking a last cigarette in the sunshine outside the terminal at London City Airport before boarding. “I hope this whole situation will have blown over even earlier than then.”

But even he was surprised that it took Prime Minister Boris Johnson until last Monday to declare a virtual lockdown.

“It was all a little late,” he said. “In his first press conference in 10 Downing Street, I thought he would have shut all nonessential shops back then — not a week and a half later.”

For some, the virus has been both a logistical and a psychological drama, forcing them to choose between the pull of two identities. Alina Nowobilska, a historical researcher of Polish heritage who was born and raised in England, now spends more of her time in Poland but found herself in London just as the crisis was escalating.

She was struck by the contrast. “When I got to England everyone was like, ‘Whatever,’ and I was thinking everyone is locking down in Poland, the schools closed a week ago, the Polish government is taking things very seriously, everyone is listening to the advice,” she said speaking by phone from Bielsko-Biala, Poland.

“In Britain there were still football matches going on and I was going, ‘Are you serious?’” she added.

With its recent history, including the transition from Communism, Poland was perhaps more accustomed to dealing with crises and more willing to accept an interruption in everyday life, said Ms. Nowobilska, 33.

“Poles listened and sucked it up and got on with it,” she added. “In England everyone was saying, ‘I’m still going to the pub.’ Poland acted faster and as a result will get rid of this virus faster.”

Getting back was not straightforward. By the time details of available flights arrived by email they had generally sold out, so it took persistence, refreshing her computer every 20 minutes on the LOT website. But, once on board, the airline staff were helpful, and back home even the local police have been supportive, she said.

“My identity is complex, I was born and bred in Britain but I am tied to both places and have roots in both places,” said Ms. Nowobilska.

British health care was also a concern, she said. While there are “great doctors” in Britain, she felt that the overall standard of health care was better in Poland. “On the flight back the majority of people were saying they feel safer in Poland,” she recalled.

Now in quarantine at home, Ms. Nowobilska feels that she made the right decision. “My friends in England were laughing at Poland for overreacting,” she said. “But Poland went straight into action, and who’s laughing now?”

How to set up an ergonomic workspace

He Took a Bullet to Save His Son in Christchurch. Can...

At Drive-in Disco, It ‘Feels like Saturday Again,’ Even Without a...

As Russia Braces for Coronavirus, Putin Fades From View

Johnson Holds Back on Restrictive Measures in U.K.’s Fight to Curb...