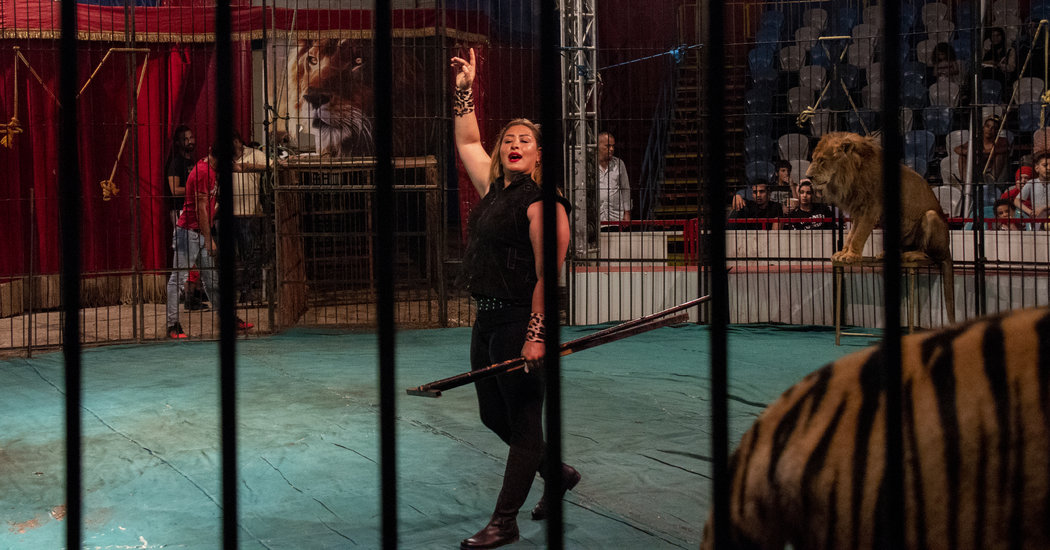 GAMASA, Egypt — At her apartment in a seaside town, Luba el-Helw, a working Egyptian mother, faced multiple demands. She juggled business calls, prepared a chicken dish and parried the demands of her three sons, aged 4 to 8, who were stretched out before the TV.

By her own admission, she can be pushy. That was a factor in her divorce, when her second husband complained that she treated him “like a circus lion.” He meant it literally.

Ms. el-Helw (pronounced hell-OU) strolled up to a perched tiger and nonchalantly stroked its face, drawing a roar. She made a theatrical grimace.

“Ladies and gentlemen,” announced a voice. “The dangerous and exciting parts are about to begin!”

The struggle for women’s equality is lagging badly in Egypt, where only 25 percent of women are in the labor force. Egypt ranks 134 out of 153 in the Global Gender Gap, an index published by the World Economic Forum. But in one field, Egyptian women are dominant.

Ms. el-Helw is one of six working female lion tamers in Egypt, mostly from the same extended family, whose old-fashioned shows draw, and delight, legions of Egyptians every year. Wearing spangled outfits, and using stage names like “The Queen of Lions,” they coax big cats through rings of fire or allow them to stroll over their bodies.

Some have become minor celebrities. Others have survived attacks. None has a man in their acts.

“I feed them myself,” said Ms. el-Helw, between shows, as she dropped a side of donkey meat into a small cage occupied by Hairem, a 6-year-old lion. “And they look on me as their mother.”

Lions have always been symbols of prestige and power in Egypt. In ancient times, Pharaohs hunted the big cats along the Nile. The Great Sphinx guarding the pyramids at Giza, which features a human head on a lion’s body, is one of Egypt’s enduring emblems.

For Ms. el-Helw, though, lions are a family business. Her grandmother Mahassen was the Arab world’s first female lion tamer, and her father, Ibrahim, was a star of Egypt’s state-run National Circus during its heyday in the 1980s.

Her father, who married three times, had seven daughters but, try as he might, no sons. So he passed his skills, and his passion, to his daughters.

Two followed him into the ring: Ms. el-Helw, 38, who succeeded her father as a lion tamer at the National Circus, and her sister Ousa, 35, who performs at a private circus. Their aunt, Faten, and two of their cousins are also in the business, as is a sixth woman not part of the family.

The once-proud National Circus, founded in 1966, has fallen on hard times. Based at a shabby tent by the Nile in Cairo, it sells tickets for $1.80 to $3.50, and draws mostly school groups and working-class families.

Like much else, Egypt’s circuses have closed as part of efforts to stem the spread of the coronavirus. Last summer, though, a giant image of Ms. el-Helw adorned the entrance to a traveling edition of the National Circus, which had come to Gamasa, a working-class resort on Egypt’s north coast where women lounge on the beach in all-covering cloaks.

Egyptians are not used to seeing a woman in charge. According to the World Economic Forum, women occupy just 7 percent of managerial roles in Egypt.

But in her performances, Ms. el-Helw leaves no doubt about who’s the boss. She projects a macho persona, speaking in a booming voice and wielding batons or whips. “People expect to see a man with a potbelly and high boots,” she said.

That swaggering stage presence is mostly for show, not to intimidate the animals. In fact, she said, she induces the lions to obey her with affection and morsels of meat. When she has to scold them, it’s with a soft whack of her flip-flop, as an Egyptian mother might an errant son.

Still, the dangers are real. Ms. el-Helw produced a photo of her grandfather, Mohammed el-Helw, who was mauled to death at the end of a show in 1972. The photo showed a man in a gleaming suit, sitting proudly astride Sultan, the lion who killed him.

Family lore has it that Sultan so regretted the attack he refused to eat and died two weeks later. But at least seven more attacks by other lions followed, wounding family members and lion-taming colleagues.

In 2015, Ms. el-Helw’s aunt, Faten, suffered a vicious mauling that left her with a broken pelvis. A year later, a male lion tamer at a park in Alexandria was killed.

Ms. El-Helw brushed off concerns about her safety. “Lions can be easier to deal with than people,” she said.

She also dismissed accusations that such old-fashioned circuses are cruel to the animals.

In between shows at Gamasa, her lions and tigers were confined to small cages, and doused with water to cool them during hot weather. After one nightly performance, Ms. el-Helw leaned over a 6-month-old white lion cub with a painful-looking heat rash on its chest, gingerly daubing it with a cream.

Her 8-year old son, whom she is training to succeed her, watched intently. The cub waved a paw, growling softly.

In Europe, several countries have introduced restrictions on using animals in popular entertainment.

But Ms. el-Helw, who was raised alongside lion cubs at their family home, insisted that she loved her charges “like my children,” and said she could not even bear to watch animals attack one another in wildlife documentaries. “I look away,” she said.

The family’s circus story started in the Mediterranean port of Damietta, Egypt, over a century ago, she said. Her great-great-grandfather was so enthralled by the Italian acrobats that performed for passengers on passing ships that he learned their tricks and passed them to his sons.

The family acquired its first lions in the 1930s. In the 1960s, they joined the National Circus.

That Ms. el-Helw comes from a long line of circus performers shows as soon as she steps into the ring.

“Sleep!” she commanded, as a tiger dropped to the floor.

Then, as the speakers blared the theme from “Jaws,” Ms. el-Helw balanced a skewer with meat between her teeth, and presented it to a lion who snacked on it, licked his lips and strolled away.

Ms. el-Helw’s younger sister, Ousa, who performed at a circus in Suez this winter, had a narrow scrape recently; a tiger clawed her neck during a performance. She didn’t take it personally.

“It was an accident; the tiger didn’t mean it,” Ousa said with a shrug.

Before lion taming, the younger Ms. el-Helw tried a more conventional career at a marketing firm in Cairo. But after a manager reprimanded her over her conduct, she saw red.

“Head butted, actually,” she added. “That was the end of the job.”

As the coronavirus closed in on Egypt in recent weeks, Ousa el-Helw transported her eight lions and two tigers to a desert compound outside Cairo, where they will wait for the show to resume.

A far bigger blow, both sisters said, was the death this year of their father, Ibrahim, 74. He taught them how to love lions, how to punish them, and the importance of treating them with respect.

When the Prince of Wales Is Your Landlord

‘No More Hugging, No More Kissing.’ At Home in Hong Kong...

This Mysterious Ancient Structure Was Made of Mammoth Bones

Israelis Find Little to Love in Their New Government, Except No...