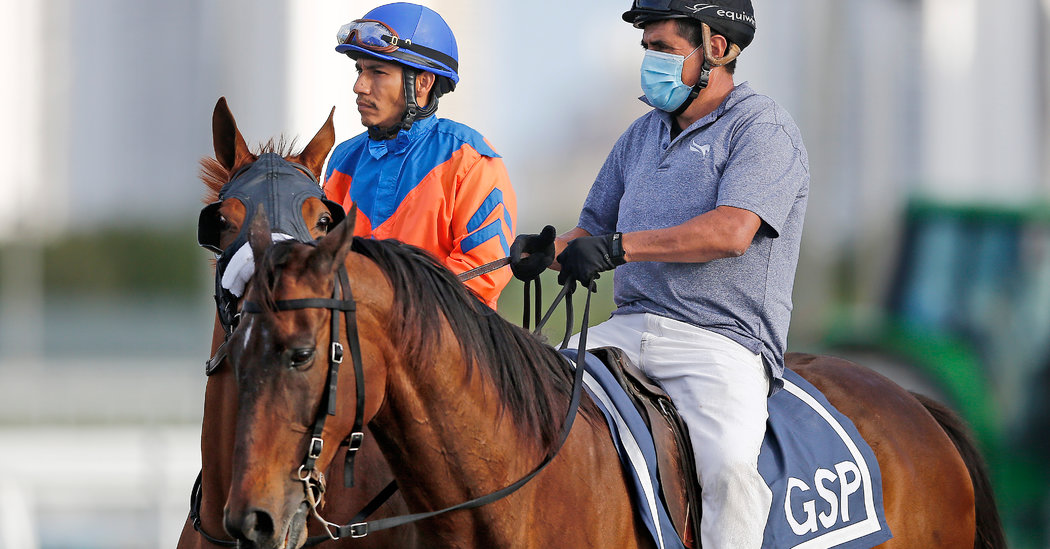 The day in (no) sports includes (some) sports, as horse racing preps for a Triple Crown like no other. Elsewhere, athletes improvised workouts and enlisted workout partners, including a special appearance by J. Lo.

A Prep Race, but for What?

If you didn’t look too closely, the Florida Derby on Saturday was like a regular Florida Derby. Tiz the Law, the favorite after winning the Holy Bull Stakes in February, sat just off the pace, took the lead at the top of the stretch and pulled away for a comfortable victory.

But a closer look revealed some irregularities. The grandstand was not full of fans; just a handful of people watched along the rail, a reasonable social distance apart. The news media, and even the horse owners, were barred from Gulfstream Park in Hallandale, Fla.

As with most Florida Derby winners, like Spectacular Bid, Barbaro and Maximum Security last year, Tiz the Law was immediately hailed as a Kentucky Derby favorite.

But the Kentucky Derby won’t be run on the first Saturday in May this year; it has been rescheduled for Sept. 5. Tiz the Law’s owner, Sackatoga Stable, which owned the 2003 Kentucky Derby winner Funny Cide, has to find a new schedule to get its colt to the race in top form.

The Preakness, originally set for two weeks after the Derby, has been postponed, possibly also to September. The Belmont is still on the calendar for June 6, but given the state of sports, and the world, a postponement seems quite likely. If not, it may suddenly become the first leg of the Triple Crown, fully three months before the other two are run.

Just finding races at all for Tiz the Law may be difficult. The three biggest racing jurisdictions, Southern California, Kentucky and New York, are currently shut down. That leaves Florida, Arkansas and a few other tracks in the United States, for now.

“Maybe we can do a Travers-Derby double,” the horse owner Jack Knowlton told The Associated Press, referring to the late August race at Saratoga Race Course in Saratoga Springs, N.Y. “Right now it’s a blank slate. Nobody knows what’s going to happen, where or when, with all that’s going on in the country.”

The Triple Crown races are exclusively for 3-year-olds, colts that are still developing. If this year’s Triple Crown is held in the fall, the entrants will be a few crucial months older, stronger and faster. Normally, by that time of year, 3-year-olds are racing against older horses, and often beating them.

That raises the intriguing question of whether Tiz the Law or a later-developing 3-year-old may be able to handle the long, grueling Triple Crown races more easily than the young spring 3-year-olds do, and perhaps even threaten Secretariat’s record times in the three races. If it happens, an asterisk may be in order.

There’s no “I” in team … except for when sports are shut down and social distancing guidelines mandate that you can’t practice with your teammates.

Athletes who play team sports suddenly find themselves alone and in need of ways to practice on their own. April Ross, a two-time beach volleyball Olympian, had to find a way to volley and spike without a partner. She got creative, setting up a net and propping a piece of wood against a tree to create a target. It started a trend, with dozens of other volleyball players putting together similar setups in their garages, driveways and backyards.

With no teammates to throw to, Yankees pitcher Gerrit Cole instead paired up with his wife, Amy, for a game of catch in their backyard. Texas Rangers outfielder Joey Gallo made a makeshift batting cage in his living room so he could take swings off a tee, joking that his neighbors were going to hate him by the end of his quarantine. The Mets’ Dominic Smith, meanwhile, is using dry swings and visualization to keep his mind sharp, paired with the occasional video game workout.

Max Domi, the Montreal Canadiens center, is working on his dribbling skills while balancing on an exercise ball. Pittsburgh Steelers running back James Conner is tossing logs for his workout. DANIELLE ALLENTUCK

A Smile or Two on Social Media

Some of us have reached the stage of confinement where social media is a lifeline to the rest of the world. And forgive us if some of the time we steer away from the frightening coronavirus news and try to find a smile or two.

For star power, it’s hard to top the double whammy of the affianced Alex Rodriguez and Jennifer Lopez playing baseball with her daughter, Emme.

In answer to the burning question, yeah, Lopez throws and catches darn well, although the editor of the video kept in one toss that wound up in the hedges.

The coronavirus has also brought the return of one of the more clever parody Twitter accounts, Captain Andrew Luck, which envisioned the Colts quarterback as a Civil War officer sending letters back home. The account seemed to sign off forever last August when the real Luck retired from the N.F.L. — “The quill has never felt more heavy. I have made the decision to holster my sidearm permanently. I shall battle no more.”

But it re-emerged Sunday: “Dearest mother — I write this important note from our barn as we must keep distance during such a chaotic time. I trust the rooster to leave this on the porch.”

Some athletes were using their platforms to take a stand. The Super Bowl-winning quarterback Kurt Warner wondered on Monday why some colleges were bringing athletes back for workouts.

And Miami Heat forward Udonis Haslem, a Miami native, in a strongly worded article on The Players’ Tribune, scolded well-off college students who were insisting on going to Florida for spring break despite the virus.

Brazil, Once a Leader, Struggles to Contain Virus Amid Political Turmoil

The internet had quite a lot to say about Kim Kardashian's...

Panic and Criticism Spread on Chinese Social Media Over Coronavirus

Please Let Chris Rock's Spiral Be The Start Of A Saw...

W.H.O. Fights a Pandemic Besides Coronavirus: an ‘Infodemic’

Grappling With Coronavirus, Tokyo Olympic Leaders Have No Good Options

World Cup Skiing Searches for Answers to Its Injury Problem