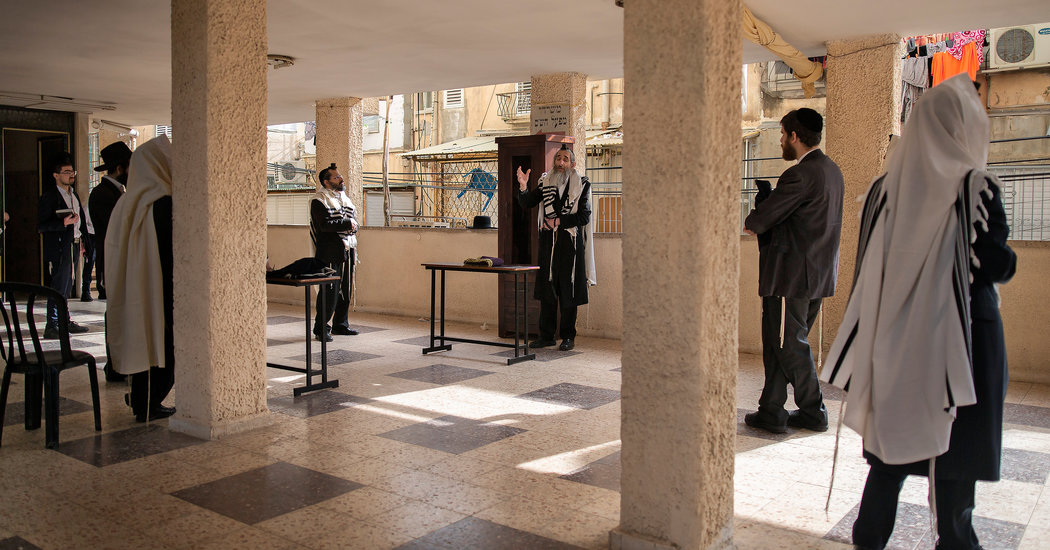 BNEI BRAK, Israel — Ultra-Orthodox Jews failing to comply with government instructions to contain the coronavirus are causing it to spread so quickly that Israeli officials are considering blockading entire communities to protect the wider population.

The virus is mushrooming in ultra-Orthodox communities as much as four to eight times faster than elsewhere in Israel.

In the Tel Aviv suburb of Bnei Brak, where 95 percent of the residents are ultra-Orthodox, the number of confirmed cases nearly doubled in the last three days, from 267 on Friday to 508 on Monday. The total was nearly that of Jerusalem, whose population is four times bigger.

Although they make up only 12 percent of Israel’s population, the ultra-Orthodox account for 40 to 60 percent of the coronavirus patients at four major hospitals, hospital officials told Israeli news media. The true dimensions of the epidemic among the ultra-Orthodox can only be estimated because testing is rare.

Experts attribute the proliferation among the ultra-Orthodox to overcrowding and large families, deep distrust of state authority, ignorance of the health risks among religious leaders, an aversion to electronic and secular media that they believe is mandated by religious law, and a zealous devotion to a way of life centered on communal activity.

All of which add up to stiff resistance to heeding social distancing orders that require people to stay home except for vital errands and prohibit meeting in groups, including for prayer. These rules threaten fundamental activities for the ultra-Orthodox including worship, religious study and the observance of life-cycle events like funerals and weddings.

The wildfire pace of infection has inflamed tensions between the ultra-Orthodox, known in Hebrew as Haredim, or “God-fearers,” and other Israelis, as a series of gotcha videos and photos have circulated showing large groups of ultra-Orthodox dancing at weddings or shopping on busy streets, as if doing so posed no risk.

The funeral of a rabbi in Bnei Brak on Saturday night, which drew several hundred mourners to the city’s streets, prompted angry denunciations by Israelis who called the participants murderers or worse. It took place days after all Israelis were ordered to stay indoors, with few exceptions.

In the predominantly secular city of Ramat Gan, which adjoins Bnei Brak, the mayor on Monday demanded a curfew on Bnei Brak, saying the hot spot there “isn’t any longer a ticking bomb, it’s a powerful bomb that blew up in our faces.”

And the director general of Bnei Brak’s only hospital, Dr. Moti Ravid, pleaded with the authorities to bar residents from leaving the community for at least a week. He said that the infection rate in ultra-Orthodox parts of the country was four to eight times higher than elsewhere in Israel.

Bnei Brak itself may prove resilient, he said, because its people have so many children, and young people have been less vulnerable.

“But if they help to infect others, the result will be that many old people will die,” he said in an interview.

Bnei Brak’s mayor, Avraham Rubenstein, insisted the city had done its best but could not expect religious Jews to embrace the restrictions.

“Do you know what it is to close synagogues?” he said.

He also assailed the central government, saying the Health Ministry had hoarded information and that the police had failed to show a firm enough hand. Late Monday, Bnei Brak said it would begin testing residents in grocery stores.

Prime Minister Benjamin Netanyahu alluded to ultra-Orthodox noncompliance Monday night, saying it was “putting the majority at risk” and promised to beef up enforcement.

“No public prayers,” he said. “No weddings, not even with less than 10 people. Funerals will be held with 20 people in open areas.”

Epidemiologists have had little difficulty explaining the spread of the virus in ultra-Orthodox cities, where time is marked by the Jewish calendar. The holiday of Purim, a carnival-like day of carousing and socializing, began the night of March 9, when gatherings of up to 100 people were still permitted. A week later the ultra-Orthodox hamlet of Kiryat Yearim, near Jerusalem, had about a quarter of its 7,000 residents in quarantine.

But when the government ordered the closing of all schools, and initially capped gatherings at 10 people — the minimum needed for a quorum, or minyan, for Jewish worship services — ultra-Orthodox rabbis did not all acquiesce, said Gilad Malach, an expert on the ultra-Orthodox at the Israel Democracy Institute.

Some ultra-Orthodox rabbis, many of whom are predisposed to suspect the state as a secularizing influence, asserted the importance of prayer and Torah study, arguing, “It’ll rescue us from this virus,” Mr. Malach said.

Rabbi Chaim Kanievsky, 92, the most revered figure in one of the largest ultra-Orthodox branches in Israel, the Lithuanians, appeared in a March 11 video with his grandson in which he rejected the idea of closing schools, saying that to do so was “more dangerous” than leaving them open.

“You saw that the rabbi doesn’t know anything about the epidemic, about the corona,” Mr. Malach said of the widely shared video. “But the adoration for him is so great, they refer to him as a prophet. So there was a delay in the shutdown of these schools.”

Rabbi Kanievsky finally issued a new edict on Sunday, echoing state authorities by decreeing that Jews pray alone in their homes, not in groups of any size, not even outdoors.

But even Haredim who professed their affection for Rabbi Kanievsky were still flouting his latest ruling and the government’s current restrictions on Monday.

A stroll through Bnei Brak revealed dozens of quiet prayer quorums, some of as many as 50 men, often hidden behind the hedges or walls in front of apartment buildings, synagogues and religious schools. At one synagogue, where worshipers shooed away a journalist and photographer, the morning service was still being held indoors.

Those ignoring the rules rationalized the decision or said they were unaware that rabbinical guidance had changed.

“There are rabbis who say we shouldn’t pray at all, others who say to pray outside,” said Yakov Levy, 21, who was part of a large prayer group.

A friend, Moshe Cohen, 25, acknowledged his fear of the virus, alluding to the death notices popping up for prominent ultra-Orthodox Jews all over, including in Brooklyn, the biggest concentration of Haredim outside Israel.

“At the beginning it wasn’t so scary,” he said. “Now we see how many Haredim died in America, and how serious it is.”

Others adopted creative coping strategies. David Tzion, a religious instructor, carried a shofar — a ram’s horn normally only played at the Jewish new year — saying, “This is guarding me.”

Worshipers in several places asked if we were there to report them to the authorities. But missing in Bnei Brak, where the local police allowed Saturday night’s funeral to proceed rather than provoke a confrontation with mourners, was any sign of enforcement.

In Jerusalem on Monday, by contrast, the police made a show of force in the ultra-Orthodox neighborhood of Mea Shearim, with officers in helicopters, on motorcycles and on foot zeroing in on groups of worshipers and issuing tickets carrying fines of $1,400.

In Bnei Brak, some residents remained upbeat about the virus.

Shmuel Stern, 17, said his uncle, a 50-year-old accountant and rabbi with 30 grandchildren, was in the hospital on a ventilator.

But he said he had been taught that the pandemic, like wars and even the Holocaust, was “getting us closer to the redemption,” the coming of the Messiah.

By Air and Sea, Mercenaries Landed in Libya. Then the Plan Went South.

This Afghan General Fought the Taliban for Years. Now He Has...

Coronavirus Live Updates: Wuhan to Round Up the Infected for Mass...

Brad Pitt Has A Message For College Grads, But His Hair...