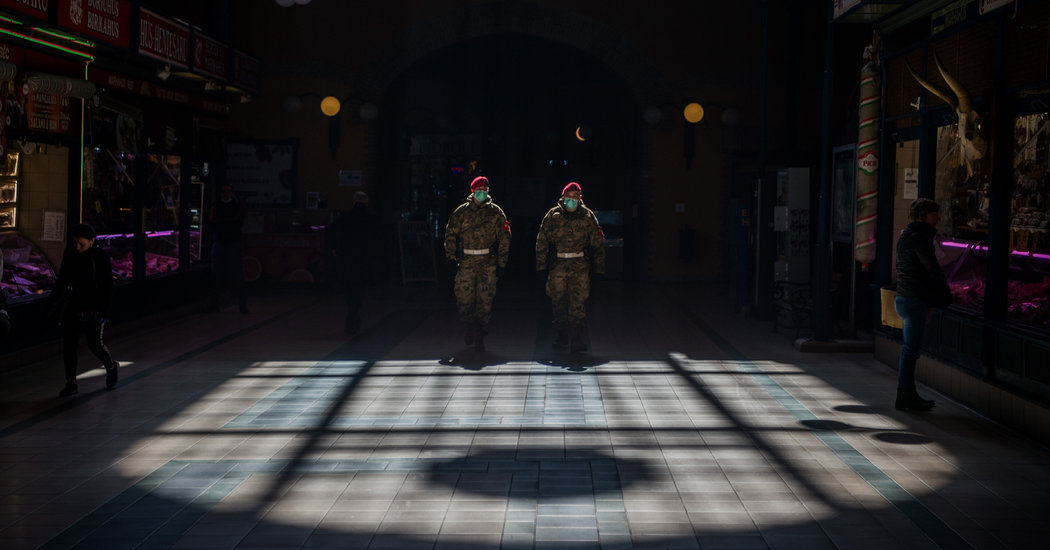 A day after the Hungarian Parliament passed sweeping emergency measures allowing the far-right populist leader Viktor Orban to rule by decree indefinitely, ostensibly as part of the country’s response to the coronavirus, the European Commission on Tuesday reminded its members to respect rights.

But it was a muted first response from the one institution that can take on Mr. Orban, and it appeared aimed at balancing the political imperative of cooperation in the era of the coronavirus with the risk of emboldening him.

“It’s of utmost importance that emergency measures are not at the expense of our fundamental principles and values,” Ursula von der Leyen, the president of the European Commission, said in a statement that made no mention of Mr. Orban or Hungary.

The European Commission is the European Union’s executive branch, and it often describes itself as “the guardian of the treaty” that created the bloc of 27 democracies.

But Mr. Orban has long been in an open struggle with parts of that treaty. He has said frankly that he does not believe in liberal democracy — which the European Commission says is fundamental to the European Union’s values.

The severe measures adopted Monday in Budapest may dramatically ratchet up the confrontation between the Orban government and European Union institutions in Brussels.

One vaguely worded section also says that people found to be spreading “falsehoods” or “distorted truths” that obstruct the authorities from protecting the public may be punished with prison sentences of up to five years. That new tool that may allow Mr. Orban to further curb the press freedoms long in his cross hairs.

To be sure, in the face of the epidemic, European countries have all to lesser or greater extent adopted emergency measures curbing liberties, including measures that require citizens to register any movement and observe curfews.

But Hungary’s new rules are the most far reaching.

And rights experts, political analysts and academics say that, given Mr. Orban’s track record and espousal of “illiberal democracy,” the measures he says he is taking to fight the virus could become fixtures in Hungarian public life, used to crack down on opposition well after the threat of the virus passes.

But they said that now — as Europe battles to stem the spread of the virus and mitigate its catastrophic economic damage, and with many nations suspending some liberties — was not the moment to pick a fight with just one member.

That measured approach surprised some observers, despite the fact that the commission often takes a conciliatory stance toward wayward members in a bid to entice them to reform voluntarily. (That has never worked with Hungary.)

“It is bizarre,” Daniel Freund, a member of the European Parliament who belongs to the German Greens political party, said of Ms. von der Leyen’s statement.

“The decision that the Hungarian Parliament took yesterday is a watershed moment,” Mr. Freund said. “Now you have to do something, or we really lose democracies.”

Mr. Freund and other members of the European Parliament believe that even before the European Commission opens a formal investigation into Hungary’s new law, which would take months, it should use existing rules to put pressure on Mr. Orban.

“If we end up after the crisis with a virus well fought but democracy lost in several member states, that’s an unacceptable situation,” Mr. Freund said.

Daniel Kelemen, a professor European Union politics and law at Rutgers University, said the epidemic could prove an opportunity for the Hungarian leader. “Throughout his consolidation of power, Orban has counted on the European Union to be distracted with other crises,” he said.

“But now,” Mr. Kelemen said, “the scale of this crisis does call for consolidation of power for the executive, so it gives him more effective cover for this next stage of escalation.”

Mr. Orban’s hold on power was unparalleled by European Union standards well before Monday’s vote authorizing him to rule by decree. In practical terms, Mr. Orban and his allies already controlled all three branches of government.

With Mr. Orban’s parliamentary opposition unable to slow his political machine, the European Union has shown itself to be the only entity capable of curbing his power, but the results have been mixed.

Lengthy and cumbersome European Union legal proceedings could not stop Mr. Orban from forcing senior judges from their positions, levying a special tax on nongovernmental organizations or ejecting the Central European University from the country.

In the end it may be Mr. Orban’s love for European financial aid, not freedoms, that acts as a brake on his government.

“Aware that the European Union is watching, Orban is likely to tread modestly at first,” said Mujtaba Rahman, the head of Europe at Eurasia Group consultancy. “He will not wish to put at risk the €5.6 billion windfall granted to Hungary by the European Parliament last week as its portion in the union’s efforts to battle the coronavirus.”

President Trump has warmly embraced Mr. Orban. Mr. Trump’s ambassador in Hungary has spoken glowingly about Mr. Orban’s grip on power and said that Mr. Trump would love to have the powers of his Hungarian counterpart.

But Mr. Orban’s autocratic tendencies have long alarmed others in Washington, particularly lawmakers who serve on the Commission on Security and Cooperation in Europe, known as the Helsinki Commission. A congressional delegation visited Hungary last year to investigate democratic backsliding.

Matina Stevis-Gridneff reported from Brussels and Benjamin Novak from Budapest.

Snapchat use is, predictably, way up with everyone home and staring...

Poor Countries Borrowed Billions from China. They Can’t Pay It Back.

30 of the most famous alien and monster photographs ever taken

How the Beleaguered BBC Became ‘Comfort Food’ in a Pandemic

The Ghost Town of Venice