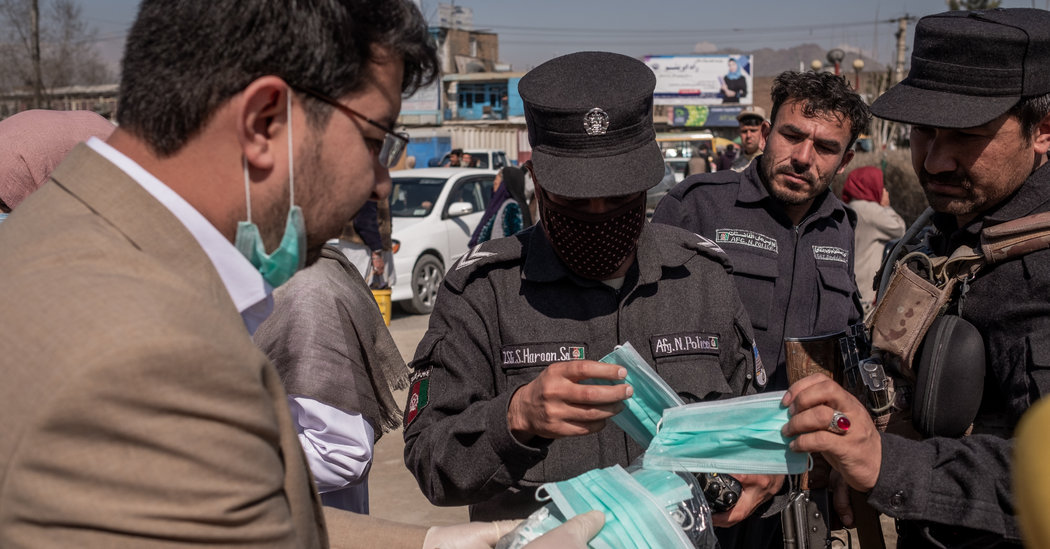 KABUL, Afghanistan — Around the time his hometown turned into the epicenter of coronavirus in Afghanistan and the government began a lockdown, Mohamed Kareem Tawain, an 80-year-old dentist in the western city of Herat, had a dream one night: that he took some money from his wife to distribute for charity, but found no one on the streets to give it to.

“When I came to the clinic the next morning and interpreted my dream, I knew it had a direct connection to the coronavirus,” Mr. Tawain said. “That morning, I decided I would waive the rent for the 10 shops I own,” which comes to about $6,000.

The virus is spreading across Afghanistan at a time when the country is grappling with a raging war with the Taliban, an election dispute that has split the government and brought a $1 billion aid reduction from the United States as punishment, and a dire economy that has plunged about half the population below the poverty line.

In such a moment of need, ordinary Afghans have stepped up to share the little that they have, tapping into a culture of generosity, volunteerism and care within the community that many feared had been eroded by decades of war, survival-first imperatives, greed, and corruption.

The shared sense of responsibility for easing the pain of an impending health crisis is turning into another test of survival for a country where life has been a daily fight for decades.

Across Afghanistan, many landlords have waived rent, in some cases until the virus threat recedes. Tailors have handed out thousands of homemade face masks. Youth groups and athletes have delivered food to hospitals and families in destitution. Local television stations have run live fund-raising events and a newspaper has championed a campaign of rent reduction. Wedding halls and private schools have volunteered to be turned into hospitals.

In Kunduz, a city overrun by the Taliban twice in recent years and badly bruised by fighting, dozens of shopkeepers have pitched in with the little they could afford: setting up wash basins and soap so passers-by can disinfect.

In Taloqan, a city in the northern province of Takhar, a large business center of about 40 shops was locked down by the municipality to reduce movement.

“As soon as the lockdown began, the owner of the business center called me and asked me to share with all the tenants that the rent is waived,” said Jamshed Kundali, who runs a small radio station in the city, housed in four shops of the business center. “The owner said not only is the rent forgiven for this month, but even until the end of the year if the situation continues like this. He didn’t ask for anything in return. He said he just wanted us to go home and follow the directives of health officials so we don’t get infected.”

In many cases, the country’s widespread poverty interferes with even the most basic efforts to tackle the spread of the virus. As many people rely on daily wages to feed their families, locking down cities and closing markets pushes them to another threat — hunger.

The crisis has often brought out the best in local leadership. With provincial leaders still preoccupied with fighting the war, local officials have acted swiftly to crack down on price gouging and to prop up quarantine and health facilities that have modest to little means.

In the eastern province of Nangarhar, the governor, Shahmahmood Miakhel, set up an emergency Covid-19 fund and in just one day received contributions of more than $100,000. When not preparing quarantine facilities and labs, Governor Miakhel — like many other local leaders — has to fight superstitions around the illness. The latest fallacy: that taking two cups of black tea before midnight protects against the virus. That advice, so the story goes, came from the mouth of a newborn baby who lived only a few minutes but who miraculously spoke to pass on the so-called revelation.

“The cure of corona is not in black tea,” the governor said on his social media accounts. “The only prescription is reducing crowds and social distancing.”

In the northern province of Faryab, the governor, Naqibullah Faiq, said that many men suspected of having the virus refused to go to hospitals because they believed their families depended on them for survival. So he has tried to break down that resistance by giving their families basic food packages.

Mr. Faiq recalled an episode in which he had forced a 50-year-old man suspected of having the virus to go to the hospital. “He escaped from the ambulance twice and once from the police,” he said.

Going to the family’s home, Mr. Faiq found the man’s mother, who said her son was the only one who had work. “So we gave them a sack of flour, a sack of rice, two kilos of sugar, five kilos of beans,” he said. “His mother became very happy, and then he happily came to the hospital to be quarantined.”

In Kandahar Province, in the south, a tailor called Mohammad Younas said he had turned his shop into a mask factory so he could hand them out to the poor.

“The lethal virus really terrified us all,” he said. “I went out to buy masks to protect myself and my family members, but I only found masks in drugstores. The costs were too high, and the people in Kandahar cannot afford them.”

Mr. Younas said he had made 7,000 masks using his own resources, and another 1,000 funded by a donation from a friend in Canada.

“They are good quality, and they are washable,” Mr. Younas said proudly. “I am not wealthy, but I felt obliged to do something for my people.”

Mr. Tawain, the dentist in Herat, said he had experienced multiple wars and droughts in his lifetime, and that Afghanistan was better prepared to deal with the virus now than with those past scourges. Even if the majority are poor, he said, there is enough wealth in the country now that, if people share, everyone can make it through.

“I remember days when a harsh famine followed a year of drought,” he said. “We were terrified because we always received word of people dying from hunger. Cattle were dying on the streets because people had nothing to feed themselves, let alone their cattle.”

“I even remember people brought their daughters to the Malan Bridge to sell so they could feed their remaining children,” he added. “But now I am not too terrified. Although it is difficult times, if we join hands, God willing the corona problem will pass.”

Shadowy Church Is at Center of Coronavirus Outbreak in South Korea

Microsoft Build 2020: How to watch and what to expect

Israel’s Right Had a Good Election. So Did Israeli Arabs. That...

Knives Out Is Soliciting For Sequel Titles (And Some Of Them...

As Passenger Angst Grows, Japan to Let Some Off Ship, but...