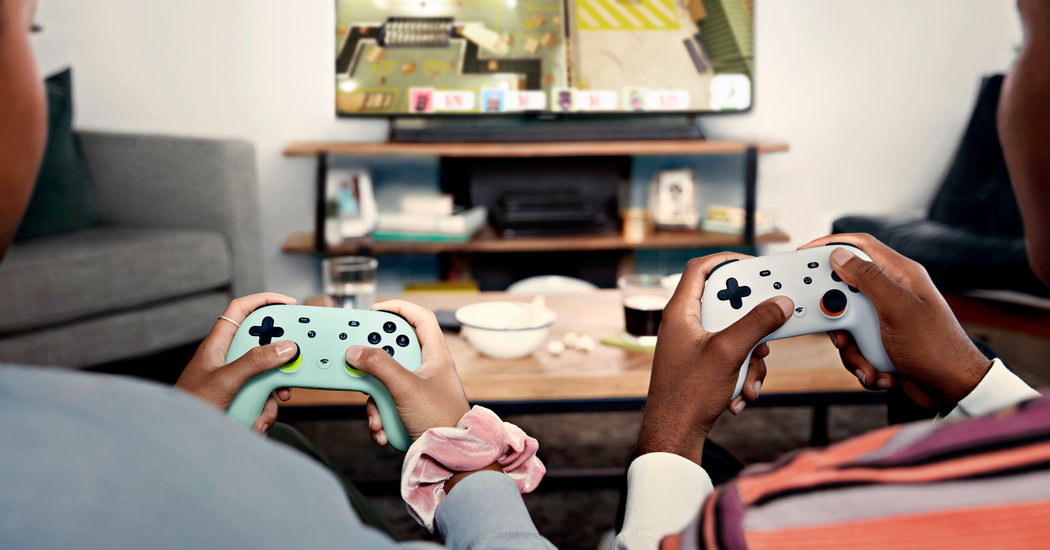 You’re one of the millions of Americans working from home. You’ve finished a few books, watched countless hours of television and maybe even dug out an old board game or two. What you aren’t: a gamer. Maybe you had an infatuation with the Sims that petered out in college or secretly dabble with Candy Crush. Maybe you’ve never played a video game. Perhaps you’re intimidated or just think gaming isn’t for you.

The great, challenging thing about games is that you don’t merely consume the entertainment. Any game requires players to make active decisions, often involving other people. You then reap the consequences of those decisions, whether a millisecond or months later. Unlike a TV show or a movie (or much of real life, for that matter), a game allows you control what happens next.

Gaming can also provide cognitive engagement, a sense of progress and, of course, fun — which is why hard-core players (those of us who spend perfectly lovely spring weekends indoors alone anyway) can devote hundreds or thousands of hours to a single game. Now that many people are cooped up with us, virtually speaking, here are some recommendations and tips for exploring the vast world of interactive entertainment.

Before You Game, Coordinate

The people you’re playing with are more important than what you’re playing. Coordinating with friends or relatives to play a game together can be a great way to stay in touch, even if it’s just a simple card or word game. In addition to Zoom for videoconferencing, the gamer-focused Discord provides easy-to-use free group voice and text chat. Discord can also be useful for nonelectronic games; a friend in Brooklyn is using Discord to play pen-and-paper Dungeons & Dragons now that her regular group cannot convene in person.

Even if you think you would prefer single-player games where it’s just you and the software, playing the same game as your friends means you can discuss scores, strategies and, most important, stories. Games are ultimately about creating your own stories.

There are three basic ways to play a video game: on a computer, on a mobile device or on a TV.

Regardless of how you play, the easiest way to see what a game actually looks like is on Twitch, the streaming service popular with gamers. While YouTube is filled mostly with prerecorded videos, Twitch allows users to broadcast their gameplay live. Just about every current game has at least one person streaming at most times, and you can browse quickly among even obscure titles.

So which platform is for you? Here is a breakdown of the options.

Computer games tend to be deeper and more detailed than mobile or console games. The best store for Windows and Mac games is Steam, which includes many free titles. Competing game platforms like the Epic Games Store (from the creator of Fortnite) and publishers like Blizzard Entertainment distribute their own exclusive games, but Steam remains the place to start, with more than 30,000 titles that users can browse by category. If you have a reasonably powerful Windows PC, you will have access to the broadest selection. Mac users have fewer choices because some games have not been converted to run on Apple systems. The best thing about Steam is that its users tend to be ruthless critics; when a game gets great reviews on Steam, it is probably worth your money. For access to a broad, well-curated selection of Windows games for just $5 per month, try Microsoft’s Xbox Game Pass.

If you want to try some of the more graphically demanding games but don’t have a console or a computer with processors powerful enough to run them properly, there is a new option: Google’s Stadia cloud gaming service, which makes fast-action games playable on most TVs and just about any computer that can run the Chrome browser, even an anemic netbook. With a cloud gaming service like Stadia, the calculations required to run a game aren’t performed by a device you own. Instead, the game runs on server computers owned by the cloud provider, using your screen merely as a display. Stadia will not satisfy hard-core players, but it does open high-end gaming to a broader audience.

The catches: It costs $130 to use the service (which includes a Chromecast Ultra and a Stadia controller) and it requires a reliable high-speed internet connection (Stadia officially recommends 10 megabits per second, but I suggest at least 30 megabits).

Phones and tablets are the most popular game systems, but many mobile games are designed around extracting money from your wallet first and providing interesting gameplay second, if at all. As gamers put it, “free to play” often actually means “pay to win.” The microtransactions that most mobile games are built on — $1 here, $5 there — can add up quickly. I enjoy the strategy-rich Clash of Clans, for example, but I recognize that I’m being fleeced while playing it. If you’re looking for a great microtransaction-free iPad game for adults that provides a rare mix of storytelling and strategy, try King of Dragon Pass.

Many apps encourage users to pay to remove advertisements. But for a broad menu of tablet and phone games that aren’t riddled with microtransactions and ads, especially for children, your best bet is probably Apple Arcade, Apple’s new subscription service ($4.99 per month or $49.99 per year) that includes access to more than 110 mostly child-friendly games. Apple Arcade also works on Apple TV, which could make it an alternative to Nintendo’s Switch. With the Switch’s mobile component rendered moot for the moment, the main reason to buy a Switch is to play Nintendo classics like the Legend of Zelda.

As for big-screen gaming in your living room, the best experiences still come from Sony’s PlayStation 4 and Microsoft’s Xbox One; the choice comes down to personal preference between the tactile feel of each system’s controller and the exclusive games each company commissions. Before buying either system, keep in mind that each company plans to release a new generation of home console this fall (the PlayStation 5 and the Xbox Series X). Prices have not been announced yet but they are expected to run $400 to $500. If you want to play cutting-edge games on your TV without an Xbox or a PlayStation, Stadia is the best bet as long as you have the required bandwidth.

There is a game for everyone. The suggestions below are intellectually stimulating and entertaining and reward a love of learning. None require preternatural reflexes, especially powerful machines, a strong stomach or a tolerance for suffering hundreds of defeats at the hands of other players before the fun kicks in. If you want help learning or understanding these games or any other, the best resources are generally YouTube (search for a game’s “tutorial” or “guide”) and the game’s particular subreddit community.

For the Sports Fan

With sports generally on hold around the world, the fan has to turn somewhere. Deep simulations like Out of the Park Baseball and Football Manager can make you and friends competing general managers, testing your knowledge over many seasons.

The genre of base-building — creating a virtual home or stronghold while overcoming adversity — is familiar to anyone who ever made a dollhouse or a sand castle.

Stardew Valley seems at first childlike, if not childish. But Stardew’s depiction of an apparently bucolic farming village (shared with your friends, if you prefer) is far deeper than it initially appears.

RimWorld, in which you guide a small band of refugees stranded on an alien planet, has been described as a management simulator, so if you’re a manager who wants to work at home after working from home, this might be the game for you.

Factorio is basically RimWorld except you are building the most outrageous factory ever instead of managing fractious humans.

Kerbal Space Program is as close to actual rocket science as most of us will ever come. Designing, building and launching even virtual spacecraft is really hard.

Frostpunk puts you in charge of a Victorian colony trying to survive global cooling by building a new city in the Arctic. Brutal and beautiful.

The sprawling Western epic Red Dead Redemption 2 is a perfect example of an “open world” game. The big wide world around you — in this case a gritty rendition of the West in 1899 — is the real star of the game. Games by Rockstar, Red Dead’s creator, feature the best dialogue in the business. If you don’t have a console, the opportunity to play Red Dead 2 is a good reason to try Stadia.

The Witcher 3, set after the events depicted in Netflix’s recent “Witcher” TV show, is one of the best role-playing games ever made. That’s because, like Red Dead 2, The Witcher 3 is set in a densely populated open virtual world, in this case a wartorn fantasy realm.

For the Socially Engaged

The deepest online games are those that include thousands of people simultaneously occupying a persistent virtual world. Players can form bonds and enmities in these games that span many years. Not many such games are made from scratch these days, but a few of the classics that made the genre famous are still thriving. If you have any real-life friends you want to go on a long virtual adventure with, or you’re willing to engage with strangers, these are the games to play.

First is the godfather of online fantasy games, World of Warcraft. Fifteen years after its release, it is still vastly entertaining and not too challenging for gaming newbies. If you don’t know anyone who already plays the game, I suggest getting a group of friends together and trying the Classic version, which is a remake of the original.

And then there is perhaps the most interesting and infuriating video game of all: Eve Online. If you like spreadsheets and want to translate that into power among thousands of hard-core gamers who have been battling for control of the same virtual galaxy since 2003, this one is for you. Eve is built on the most robust economic and financial simulation in gaming. Or if you just want to fly a spaceship around and say “pew pew” while shooting lasers at everything, that works, too. Eve’s learning curve is a tricky one, but with a few visits to the Eve University Wiki and the always helpful Eve subreddit, you’ll be a space pirate in no time.

Fugitive Iranian Judge Dies After Fall From Hotel in Romania

Workout Recovery: What to Avoid on Rest Days & 5 Tips...

For Italians, Dodging Coronavirus Has Become a Game of Chance

A Voice in French Literature: Her Own

A new public exhibition commemorates the life of Khadija Saye, who...

The Royal family has created a premium gin using botanicals from...