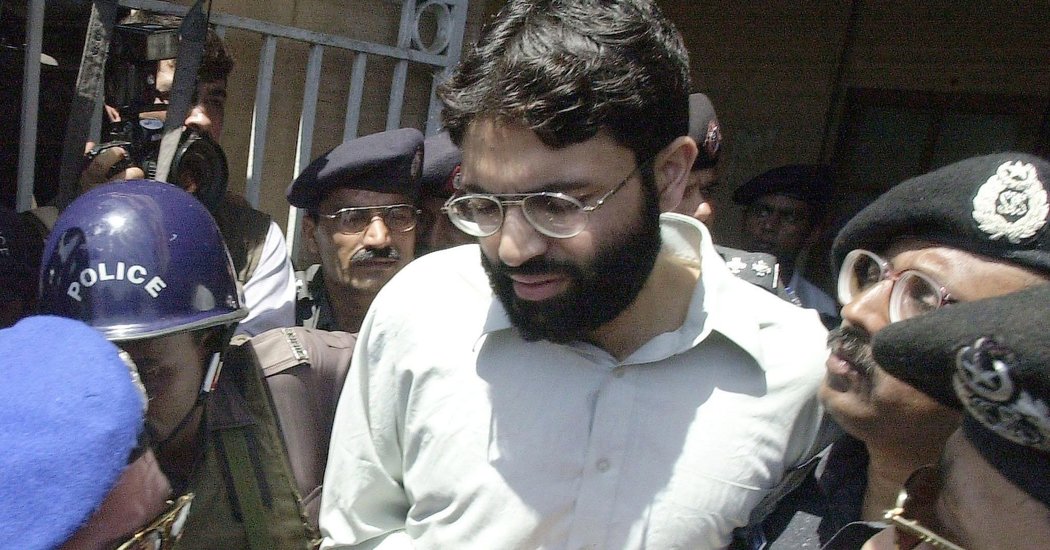 ISLAMABAD, Pakistan — A Pakistani court on Thursday overturned the murder conviction and death sentence of Ahmed Omar Sheikh, a British-born militant who had been convicted of masterminding the 2002 abduction and killing of the American journalist Daniel Pearl, lawyers said.

The court also overturned the convictions of three other men who had been serving life sentences in the case. All four men were expected to be freed soon, lawyers said.

Mr. Pearl, a reporter for The Wall Street Journal, was abducted in January 2002 in the city of Karachi, while working on an article about Pakistani militant groups with links to Al Qaeda. He was later beheaded.

A two-member bench of the Sindh High Court in Karachi, headed by Justice Mohammad Karim Khan Agha, found that there had been sufficient evidence to convict Mr. Sheikh of kidnapping, but not of murder, said Mr. Sheikh’s lawyer, Khawaja Naveed Ahmed. “The court ruled that the charge of abduction was proven,” he said.

The court reduced Mr. Sheikh’s sentence to seven years. Because he has been imprisoned for 18 years, he was expected to go free along with Fahad Saleem, Syed Salman Saqib and Sheikh Muhammad Adil, the three other men whose convictions were overturned, Mr. Ahmed said.

Lawyers said the court had not yet issued a detailed ruling, only a brief order.

Still, Steven Butler, the Asia program coordinator at the Committee to Protect Journalists, said the organization was “deeply disappointed.”

“We urge prosecutors to appeal the decision, which found Ahmed Omar Saeed Sheikh guilty only of kidnapping Pearl in a crime that led directly to his murder,” Mr. Butler said in a statement.

Soon after Mr. Pearl’s killing, Pakistan’s government, then led by President Pervez Musharraf, moved quickly to arrest Mr. Sheikh and the other men, amid a global outcry and pressure from the United States.

But a 2011 report, based on investigative work by students and faculty at the journalism program of Georgetown University and the International Consortium of Investigative Journalists, cast doubt on the four men’s convictions. It found that Mr. Sheikh and the three other men had been involved in the plot to abduct Mr. Pearl but were not responsible for his murder.

American officials have said that they believed Khalid Shaikh Mohammed, the accused mastermind of the attacks of Sept. 11, 2001, had personally carried out Mr. Pearl’s murder.

While the Pakistani authorities arrested and identified several people in the abduction and killing, their court cases saw acquittals or long delays. At least two people allegedly involved in the murder plot were killed in police shootouts.

Amjad Hussain Farooqi, a close associate of Mr. Sheikh, was fatally shot by the police in 2004. Mr. Farooqi was believed to have picked up Mr. Pearl on the night of the abduction and driven him to a place in Karachi where he was held and killed.

In 2014, Mohammad Hashim Qadeer, another main suspect in the murder, was acquitted by a court in Hyderabad for lack of evidence.

Mr. Sheikh, a British citizen who was trained in camps in Pakistan and Afghanistan, belonged to the militant group Jaish-e-Muhammad at the time of his 2002 arrest. Pakistani investigators said Mr. Sheikh lured Mr. Pearl by offering him an interview with an Islamic cleric who had ties to Richard C. Reid, the so-called shoe bomber, who was accused of trying to blow up a trans-Atlantic flight in December 2001 with explosives in his sneakers.

Mr. Sheikh has made headlines from his cell over the years. In 2008, soon after Pakistani militants carried out terrorist attacks in Mumbai, Mr. Sheikh managed to place a call to Pakistan’s president at the time, Asif Ali Zardari, pretending to be the Indian foreign minister and warning of an attack by India. In 2016, the Pakistani military announced that it had foiled a plan to free Mr. Sheikh from prison.

Australia Thought the Virus Was Under Control. It Found a Vulnerable...

14 Die and Hundreds Sickened in Pakistan, and the Cause Is...

2019 Was a Record Year for Ocean Temperatures, Data Show

Is the Secret to Japan’s Virus Success Right in Front of...