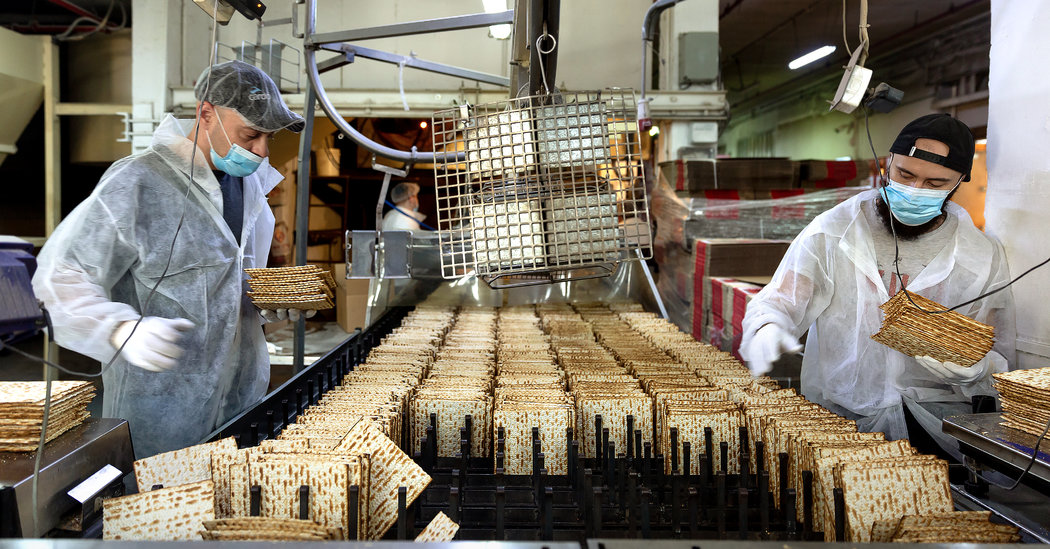 Israeli Jews are seeking novel ways of celebrating this week’s Passover holiday, traditionally a festival of freedom and community, after the government announced strict curfews to limit social gatherings.

On the first night of Passover, which falls on Wednesday, multigenerational families, relatives and friends usually gather for the ritual Seder feast to commemorate the Israelites’ liberation from bondage in ancient Egypt.

But in an extraordinary effort to prevent the spread of the coronavirus, the government has tightened the general lockdown with additional restrictions targeted specifically at the holiday.

All travel between cities was banned from 7 p.m. Tuesday until 6 a.m. Friday. And from Wednesday afternoon until Thursday morning, residents of predominantly Jewish areas will have to remain in their own homes with no visitors allowed, not even immediate family.

The Passover restrictions come on top of existing antivirus measures that restrict people to within 100 meters of their homes except to shop for food or medical supplies or other essential trips.

Naftali Bennett, the defense minister, warned Israelis in a Facebook post on Tuesday that children sneaking over to their parents’ homes for Seder night “could kill them.”

His household, he said, would conduct a Zoom pre-Seder with extended family before the official start of the festival at sundown, since strictly observant Jews do not use electricity or technological devices on holy days.

Mr. Bennett also proposed that all those celebrating step out onto their balconies or into their yards at 8:30 p.m. precisely and sing “The Four Questions,” a popular part of the liturgy, as one people, out loud. The first line of the song — “Why is this night different from all other nights?” — is likely to resonate and set off many a debate around the table this year.

For those less concerned with the strictures of Jewish law on technology, an Israeli television channel will broadcast a live, star-studded “Great Israeli Seder” featuring popular celebrities, journalists and politicians.

The religious questions arising from Zooming this year’s Seder gatherings set off a fiery, Talmudic-like debate among Israel’s rabbis, who had to weigh whether the psychological distress caused by family separation and loneliness justified the use of screens and devices based on the principle of allowing exceptions to religious law to save a life.

A group of venerable rabbis of Moroccan descent presented a nuanced ruling in favor of allowing video chat for this year only, provided that the session starts before the official onset of the holiday at sunset, with no further clicking after that.

Some of the younger generation would be unlikely to participate in a Seder without their grandparents, they argued, and for the elderly and those living alone, a Zoomed Seder could alleviate sadness and depression and augment the will to live.

Others, including Israel’s state rabbinical authority, vehemently opposed that ruling, upholding the ban on the use of electronic devices even if they are switched on by a timer.

They said they feared that such an exception could open the door to more widespread screen use on the Sabbath and holy days even when a life is not imminently at risk.

“In rulings of religious law there is a general policy, but also an infinite number of individual exceptions,” he said in an explanatory video, adding that the rabbis of the Moroccan tradition had offered an out for those whose loneliness on Seder night might otherwise be unbearable.

Another coronavirus-related concession included a ruling issued by Jerusalem city hall, citing rabbinical authority, that people unable to leave their homes to perform the customary outdoor burning of remnants of leavened goods, which are not kosher for Passover, may instead flush a symbolic amount, about the size of an olive, down the toilet.

The state rabbinical authority also ruled that coronavirus patients who have lost their sense of taste should still make the relevant blessings over food and drink.

Some rabbis noted that the very first Passover was also held under lockdown.

According to the book of Exodus 12, when God visited a 10th deadly plague, the slaying of the first born, on recalcitrant Egyptians, Moses instructed the Israelites to take a lamb home for slaughter and to daub blood on their doorposts so that God would pass over their houses and not smite them.

Moses added: “None of you shall go outside the door of his house until morning.”

Meron Benvenisti Dies at 86; Urged One State for Jews and Palestinians

As World Comes to Halt Amid Pandemic, So Do Migrants

Walt Disney World’s Pirates Of The Caribbean: 5 Cool Things You...

In a Victory for Women in Sudan, Female Genital Mutilation Is...

U.S. Presses Other Muslim Nations to Establish Ties With Israel