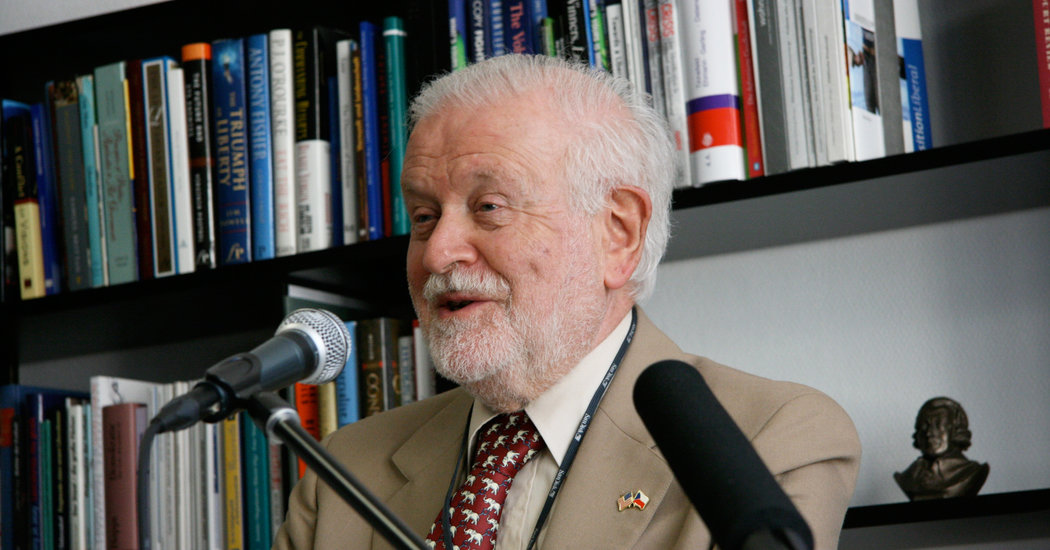 S. Fred Singer, a physicist whose efforts to refute established climate science earned him the enmity of experts, died on April 6 at a nursing facility in Rockville, Md. He was 95.

His death was confirmed by Rochelle Lieberman, a cousin.

Even as evidence of the human causes of climate change and its risks to the planet coalesced into a scientific certainty, Dr. Singer argued that the threat of climate change was overblown, that efforts to blunt its effects would cause grievous economic damage, and that the effects of global warming would be largely beneficial.

“Not only was Fred among the first atmospheric experts to publicly question the validity of climate models, but as it became more and more politically incorrect to criticize the models, Fred was unmoved,” said Steven J. Milloy, a climate-change denialist who served on President Trump’s transition team for the Environmental Protection Agency. “He doubled and tripled down on substantive criticism of the models, putting his scientific view ahead of the risks to his stellar career and reputation.”

But most climate experts saw a humbug.

Dr. Singer was a focus of the book “Merchants of Doubt” (2010), which examined how tobacco and other industries promoted a small group of scientists who worked to muddy the truth on climate change and other environmental risks, including secondhand smoke, asbestos and acid rain. He was one of those, the book’s authors, Naomi Oreskes and Erik M. Conway, wrote, who “used their scientific credentials to present themselves as authorities” and “used their authority to try to discredit any science they didn’t like.”

In an interview, Dr. Oreskes, who is a historian of science at Harvard University, noted that Dr. Singer singled out reputable climate scientists for personal and professional attack. “I think he did a lot of damage, through literally decades of casting doubt on established science,” she said.

Before he was a vocal climate-change contrarian, Dr. Singer had an illustrious scientific career. An early rocket scientist whose work was important to the development of earth observation satellites, he was a professor at the University of Maryland, the University of Miami and the University of Virginia, among other institutions, alternating with positions in government.

From 1962 to 1964, he was director of what was known as the National Weather Satellite Center. He was the deputy assistant secretary for water quality and research at the Department of the Interior from 1967 to 1970 and then, until 1971, the deputy assistant administrator for policy at the newly formed Environmental Protection Agency. From 1987 to 1989, he was chief scientist at the Department of Transportation.

Despite his accomplishments, said Ms. Lieberman, his cousin, “he wasn’t flashy about things like that.” She recalled that during a visit with him to the National Air and Space Museum in Washington when she was a little girl, she was surprised to find him cited in an exhibition about earth observation satellites. “Why’s his name on this?” she recalled thinking. “I was too young to appreciate it at the time.”

The U.N. group warned in 1995 that warming “is likely to cause widespread economic, social and environmental dislocation over the next century if emissions of heat-trapping gases are not reduced.” Dr. Singer remained unfazed. “They have no evidence. None,” he told fellow contrarians at a conference in Copenhagen in 2009.

With the coming of the Trump administration, climate contrarians were once again in demand, and Dr. Singer was considered “the most senior of Mr. Trump’s experts on climate change,” Peter Ferrara, a senior fellow at Heartland, wrote last year in an essay in The Washington Times.

Siegfried Fred Singer was born on Sept. 27, 1924, in Vienna to Joseph Singer, a jeweler, and his wife, Anna, according to the 2004 book “Shapers of the Great Debate on Conservation: A Biographical Dictionary.”

His family fled the Nazis, sending him to England through the kindertransport program. He made his way to the United States in 1940 and was reunited with his family in Ohio.

He graduated from the Ohio State University with a bachelor’s degree in electrical engineering in 1943. He signed naturalization papers in 1945, while serving in the Navy. He received a Ph.D. in physics from Princeton University in 1948.

Dr. Singer married Isabel Robbins in 1979; they divorced in 1983. In 1990 he married Candace Carolyn Crandall, who helped set up the Science and Environmental Policy Project. They divorced in 2000. He had no children from either marriage, though he had five stepchildren. A sister, Melanie Watkins, died last year. His survivors include his stepchildren Erin Gifford and Ryan Hill, and a close extended family.

A prolific writer, Dr. Singer published opinion articles in The New York Times, The Washington Post and The Wall Street Journal; his most recent for The Journal (which is confuted by reams of data and research) appeared in 2018, when he was 94. He wrote or co-wrote more than a dozen books.

Reacting to Dr. Singer’s death, Andrew Dessler, a climate scientist at Texas A&M University, wrote on Twitter, “I always liked Fred personally,” comparing him to “an irascible uncle who would say the most preposterous things at Thanksgiving and everyone would just roll their eyes.” Dr. Singer occasionally spoke at Professor Dessler’s classes on climate change policy.

In an interview, Professor Dessler stood by his fond description, but added that while Dr. Singer’s early career was respectable, his climate work was deeply flawed.

“None of the scientific claims he made,” he said, “stood the test of time.”

Food Line in Geneva Stretches To More than 1,500 People

A Glimpse Inside the Secluded World of a Georgian Nunnery