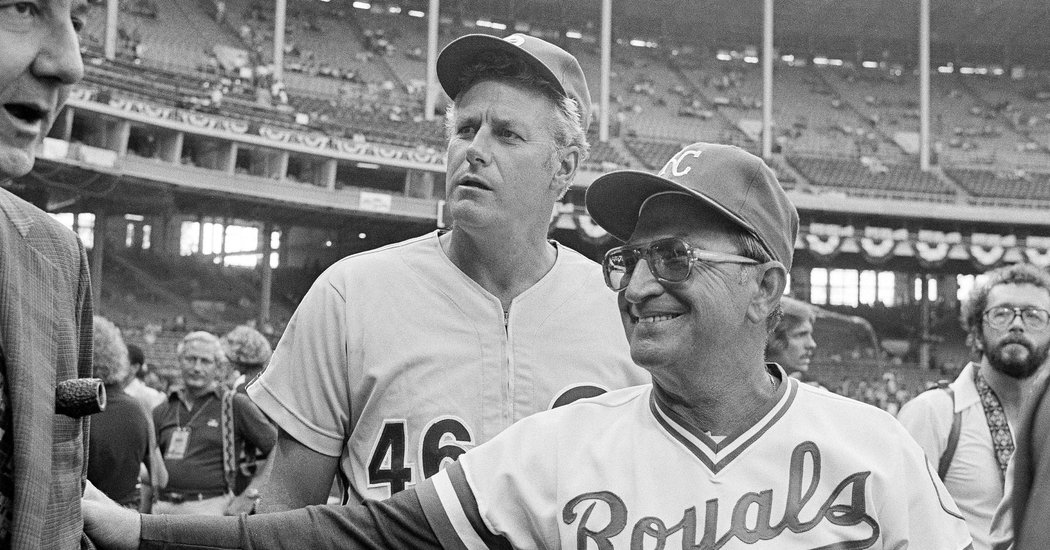 Jim Frey, who managed the Kansas City Royals to the 1980 American League pennant and the Chicago Cubs to within one win of the 1984 World Series, died on Sunday at his home in Ponte Vedra Beach, Fla. He was 88.

His death was announced by the Somerset Patriots, a New Jersey minor league team that he had been affiliated with since its founding in 1998. No cause was given.

An outfielder, Frey spent 14 seasons in the minor league organizations of the Boston and Milwaukee Braves and the St. Louis Cardinals without reaching the majors.

He scouted and managed in the minor leagues for the Baltimore Orioles and coached for them under Earl Weaver in the late 1970s.

Frey replaced Whitey Herzog as the Royals’ manager after the 1979 season. Kansas City won the American League West with a 97-65 record in 1980, finishing 14 games ahead of the Oakland A’s.

The Royals rode a potent offense led by George Brett, Willie Wilson, Hal McRae, Frank White and Willie Aikens, and a pitching staff headed by Dennis Leonard, Larry Gura and Dan Quisenberry. They swept the Yankees, 3-0, in the A.L. Championship Series, then lost the World Series to the Philadelphia Phillies in six games.

Kansas City had a record of 20-30 when the 1981 season was interrupted for about six weeks by a players’ strike. Afterward, in a split-season format, the Royals were in first place in the second-half division standings, with a 10-10 record, when Frey was fired. He was replaced by Dick Howser, who had been jettisoned by the Yankees after losing to the Royals.

Frey coached for the Mets in 1982 and 1983 and then was hired by the Chicago Cubs to replace Charlie Fox. Seeking its first World Series title since 1908, Chicago went 96-65 and won the National League East, reaching the postseason for the first time since 1945.

A celebrated group of Cubs — including Ryne Sandberg, Ron Cey, Gary Matthews, Keith Moreland, Leon Durham and Rick Sutcliffe — won the first two games in the best-of-five N.L. Championship Series against the San Diego Padres at Wrigley Field. But the Cubs lost the next two games at San Diego.

In Game 5, also at San Diego, Chicago led 3-0 before allowing two runs in the sixth inning and four in the seventh in a 6-3 defeat. (They did not reach the World Series until 2016, when the Cubs beat Cleveland in seven games.)

James Gottfried Frey was born on May 26, 1931, in Cleveland. He became friends with the future major leaguer Don Zimmer at Western Hills High School in Cincinnati.

After spending 1987 as a commentator on the Cubs’ radio broadcasts, he was hired as the team’s general manager that December and brought in Zimmer as manager. Chicago won the division in 1989, only to lose to San Francisco in the playoffs.

Frey was replaced as general manager by Larry Himes in 1991.

He became vice chairman of the Somerset Patriots, owned by his friend Steve Kalafer, and shifted to an advisory role in later years. The team is part of the Atlantic League.

This Mysterious Ancient Structure Was Made of Mammoth Bones

‘Be in No Doubt That I Can Continue,’ Boris Johnson Says

A Divided Hong Kong Confronts the Arrival of the Coronavirus

Did You Know There Are College Junior Varsity Basketball Teams? North...

The 9 Victims of the Helicopter Crash That Killed Kobe Bryant