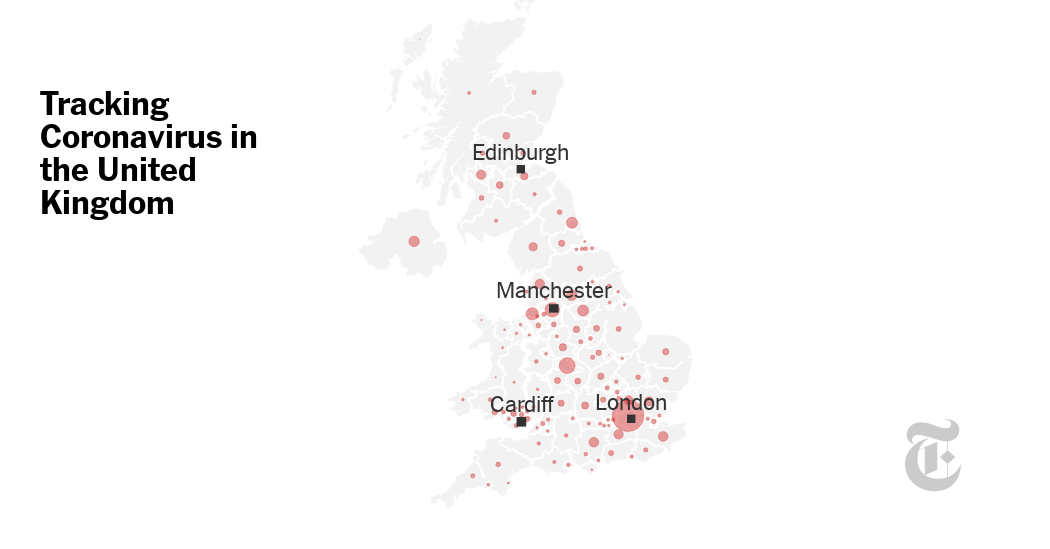 There have been at least 103,000 confirmed cases of coronavirus in the United Kingdom, according to a New York Times database. As of Thursday afternoon, 13,729 people had died.

Confirmed cases in the United Kingdom

Double-click to zoom into the map.

Use two fingers to pan and zoom. Tap for details.

Sources: Department for Health and Social Care, Public Health England, Public Health Scotland, Public Health Wales, Public Health Agency of Northern Ireland, Chief Medical Officer Directorate. Data for Scotland and Wales is reported by public health boards. Circles are sized by the number of people there who have tested positive, which may differ from where they contracted the illness.

Here’s how the number of cases and deaths are growing in England, Scotland, Wales and Northern Ireland:

Cases by country and local area

Note: Detailed death data was not available for some areas.

New cases in Britain have continued to grow in recent weeks, even as they have leveled off or declined in Italy and Spain. But officials have expressed optimism that the rate of growth in cases and deaths was slowing, and researchers at Imperial College London estimate that social distancing measures are working to reduce rates of transmission. The nation continues to report around 5,000 new cases each day, the vast majority of which are in England.

Britain waited until March 23 to impose a national lockdown, later than other European countries, following a debate over how aggressively it should try to curb the spread of the virus. It also got a slow start in testing and contact tracing, with frontline doctors and nurses unable to get tested. The U.K. has pledged to carry out 100,000 tests a day by the end of April.

The epidemic has ravaged the nation’s political establishment, most prominently Prime Minister Boris Johnson, who ended up in intensive care with a serious case of the virus before being discharged on Sunday.

Britain’s National Health Service has so far been able to handle the increased number of patients, though there are persistent reports about a lack of protective gear. Scottish and Welsh officials have raised concerns over reports that the NHS in England is being prioritised for personal protective equipment, though Downing Street denies the accusations.

How Cases Are Growing

Here’s how the number of new cases is changing over time:

New reported cases by day in the United Kingdom

New reported deaths by day in the United Kingdom

Note: Scale for deaths chart is adjusted from cases chart to display trend.

The government’s daily death statistics do not include those who died in nursing homes. The Office of National Statistics publishes figures that include those victims, although they lag the hospital numbers by 12 days. As a result, the death toll is estimated to be at least 1,000 people higher than the daily number. The low level of testing means the number of cases is probably a multiple of the reported figures.

Where You Can Find More Information

Read more about the advent of telemedicine, the British volunteers supporting the vulnerable and healing Brexit wounds, and how the BBC is acting as pandemic “comfort food” for self-isolating Britons.

Other areas of debate include police drones and the demise of “individual liberty,” the medical rationing dilemma, and everything you need to know about Britain’s “top finance official” Chancellor of the Exchequer, Rishi Sunak.

Here is where you can find more detailed information:

Soccer Is a Habit. But Habits Can Be Broken.

WhatsApp cuts off support for older phones: How to tell if...

Justice League’s Ray Fisher Thanks Zack Snyder For ‘Empowering’ Him In...

Frightened by Coronavirus, Many of U.K.’s Poles Are Heading Home