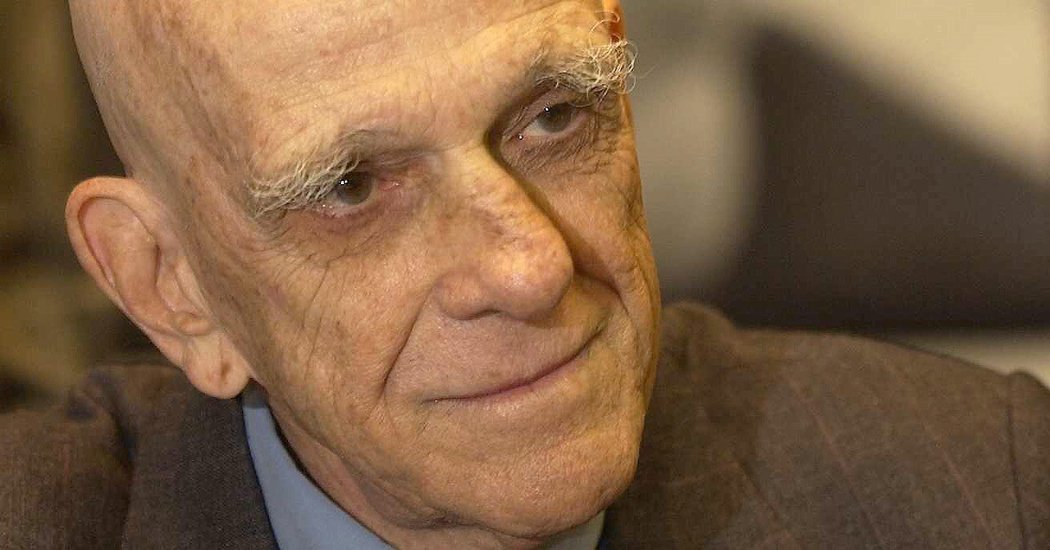 Rubem Fonseca, whose flinty, obscenity-laden crime stories were seen as dark metaphors for the rot in Brazilian society, died on April 15 in Rio de Janeiro. He was 94.

His death was confirmed by Samaritano Hospital, where he died after a heart attack.

Over more than half a century, Mr. Fonseca wrote short stories, novels and screenplays that titillated and shocked Brazilians with their terse style and seamy content. They also made him a best-selling author and sealed his reputation as one of the country’s literary giants.

His first collection of short stories “Os Prisoneiros” (“The Prisoners”) was published in 1963 and described as “brutalist.” But its major achievement was to shift the focus from the rural settings that Brazilian fiction tended to favor, to an urban area as the country was transforming from an agricultural economy to an industrial one.

Mr. Fonseca was a former police official who used his real-life experience as the fodder for his stories. His narrators tended to be police inspectors, criminal lawyers or private detectives, and their unflinching depiction of crimes of passion and pettiness could be as lyrical as they were cruel.

“I wrote 30 books, all of them filled with obscenities,” he said in one of his rare speeches. “We writers can’t discriminate against words. It doesn’t make sense for a writer to say ‘I can’t say that,’ unless you’re writing children’s books. Every word has to be used.”

Many readers enjoyed his stories as crime fiction and for their frank eroticism, but they also captured a deeper unease and resonated across a nation that was finding its footing during a turbulent period.

At the time, Mr. Fonseca was the Brazilian writer most obviously influenced by literature from the United States and perhaps, more important, by American movies. Being a best-selling author can be a paltry distinction in Brazil, where relatively few people read and a normal press run is only a few thousand copies. But in a country reputed to have more television sets than refrigerators, Mr. Fonseca sealed his fame as many of his works were adapted for film and TV.

His most popular novel, “A Grande Art,” was the basis for the director Walter Salles’ first feature film, “The Knife,” in 1991. Mr. Fonseca’s most critically acclaimed novel, “Agosto,” which depicts a series of crimes and culminates with the suicide of President Getúlio Vargas, was made into a mini-series for Globo TV.

Mr. Fonseca’s 1986 novel, “Bufo & Spallanzani,” which tells the story of a popular novelist who becomes the principle suspect in a murder, was a major best seller in Brazil but achieved wider renown when it was made into a movie in 2001 directed by Flavio Tambellini and starring some of Brazil’s top novella stars.

A screenplay for “Man of the Year,” which Mr. Fonseca adapted from a novel by Patricia Melo and which was directed by his son, Jose Henrique Fonseca, enjoyed success outside Brazil.

Despite being a recluse, Mr. Fonseca was a presence in Rio’s Leblon district, where he could be frequently spotted walking along the beach wearing dark glasses and a ball cap. Still, he spent most of his career refusing to give interviews and he shied away from photographs, styling himself after Thomas Pynchon, with whom he was reportedly friendly.

Mr. Fonseca did speak briefly before TV cameras in 2013, when he celebrated his 50th year working as a writer by opening a small library he had built for Rio de Janeiro transit workers. His brief speech praised the importance of their work and highlighted the importance of reading.

“We readers, we fill in the gaps that writers leave deliberately and unconsciously,” he told the gathered workers somewhat cryptically. “Long live work, long live reading!”

José Rubem Fonseca was born on May 11, 1925, in Juiz de Fora, a city in Minas Gerais state. His parents, Alberto Augusto Fonseca and Julieta Mattos Soares, were Portuguese immigrants, and the family moved to Rio de Janeiro when he was 7.

He studied law and became a police officer in 1952, working mostly in public relations. In 1953, he became one of nine officers chosen for professional training abroad and spent a year at New York University studying business administration.

He left the police department in 1958 and later became director of Brazil’s Institute for Social Studies and Research, an organization that supported Brazil’s 1964 military coup and the ensuing regime.

Mr. Fonseca later denied that he supported the coup, although documents suggested otherwise. Regardless, he ran afoul of the military regime in 1975 when his book of short stories, “Feliz Ano Novo” (“Happy New Year”), was banned. The country’s education minister described it as a “literary obscenity.”

The book, which was already a best seller before being banned, was rereleased in Brazil in 1986, three years after the dictatorship ended.

In addition to his son, Mr. Fonseca is survived by two other children, Maria and Jose Alberto. His wife, Thea, died in 1997.

In 2003, Mr. Fonseca was awarded the Camoes prize, the highest literary honor in the Portuguese language, sponsored by the governments of Brazil and Portugal. And in 2015 he won the Brazilian Academy of Letters’ Machado de Assis prize, which occasioned one of his rare speeches.

“I am an idiosyncratic man and idiosyncrasies don’t explain themselves,” he told the academy.

In Some Nations, Coronavirus Is Only One of Many Outbreaks

When Going to Work Means Taking a Calculated Risk

In Brazil, a President Under Fire Lashes Out at Investigators

One of Europe’s Most Polluted Towns Stages a Noisy Revolt

Bradley Walsh's family: wife, children and everything you need to know

Why The Star Trek Movies Don't Need To Return To The...

Brace for Zion vs. LeBron

Tears for the Magnificent and Shrinking Everglades, a ‘River of Grass’