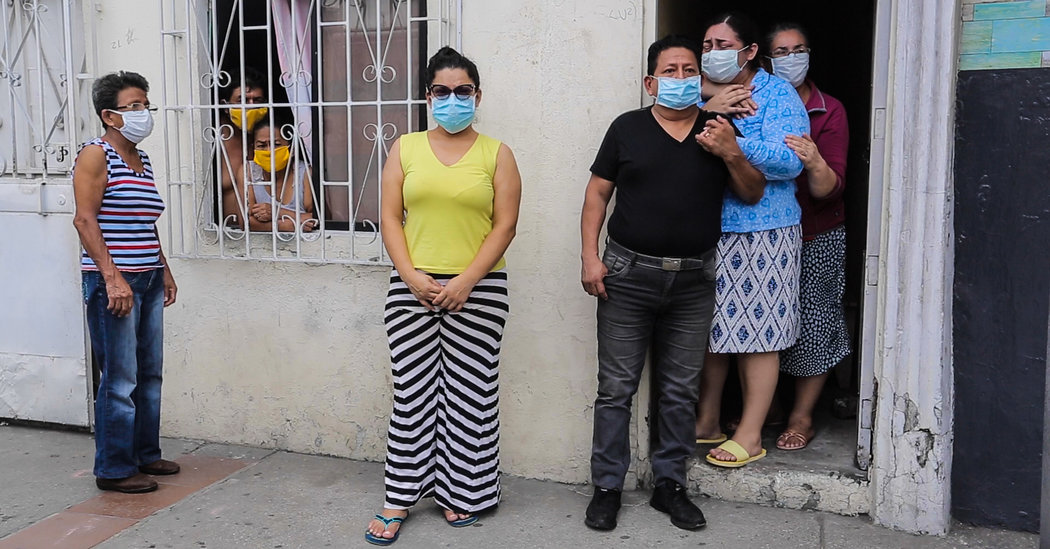 Outside a hospital in Guayaquil, Ecuador, a family seals the coffin of their father with plastic wrap. Many people in Guayaquil blame the government for failing to slow the spread of coronavirus, and to deal with the thousands of bodies that have piled up in the aftermath. Guayaquil has suffered arguably the worst Covid death toll in Latin America. The thing is, Ecuador had acted earlier than its neighbors to close borders and order strict quarantine. So what went wrong? From the start, the one-two punch of rapid contagion and the ensuing death toll caught local and national officials off guard. On Feb. 27, doctors in Guayaquil diagnosed the country’s first Covid-19 patient, Bella Lamilla, a 71-year-old retired teacher, otherwise known as “Patient Zero.” Dr. Esteban Ortiz-Prado is a medical investigator helping to advise the government on the pandemic. It took 13 days to diagnose Lamilla with coronavirus. And in that time, she infected many other people, including much of her family, pictured here in 2019. In all, three family members died, including Bella herself. After she arrived in Ecuador, Lamilla stayed in the home of her niece, Cassandra, in the town of Babahoyo. Bella Lamilla was certainly not the only case. There were at least six other flights from Madrid to Guayaquil between the time she arrived and when she was diagnosed. Other travelers later tested positive for Covid-19. Those lost weeks led to an out-of-control epidemic. Two and a half weeks after Bella Lamilla’s diagnosis, the country was on lockdown. Two weeks after that, Guayaquil was in the throes of the most aggressive outbreak in Latin America. “It is true that at the very beginning, it was a disaster. We are learning by mistake, by errors that we made.” This is Dr. Juan Carlos Zevallos. He was installed as Ecuador’s health minister in late March, after the former minister resigned. He admits the government should have tested and tracked patients. But he also blames residents for not following stay-at-home orders after Bella’s diagnosis. “Ecuador, as I said, was prepared. I mean, did all the measures in place and very early. Unfortunately, the people didn’t hear us. And they did not obey those restrictions.” Like a lot of cities in Latin America, a large segment of Guayaquil’s population lives day to day, working informal jobs. So to stay home means not eating. It was a perfect storm of factors that left Guayaquil’s hospitals and morgues overwhelmed. Now, the government of Ecuador has another dilemma: Just how to bury the thousands of bodies that have piled up in the weeks after Lamilla’s death? Ecuador’s official Covid death toll is several hundred. But forensic police have been working around the clock to collect and account for thousands more dead. And construction is now underway for various large burial sites around the city. Container trucks like this one transport corpses to one new site on the outskirts of Guayaquil, in the neighborhood of Pascuales. Local residents fearful of contamination are outraged. Officials in charge of handling the dead have promised that each body will have a separate resting place. We attempted to film drone footage of the new burial site. But Ecuadorean soldiers ordered our team to bring the drone down, and temporarily confiscated our footage. A human rights worker documented the incident. Since the first coronavirus diagnosis, distrust of the government’s handling of this crisis appears to have spread as fast as the contagion itself.

Apple ruling: Tax battle is 'a marathon not a sprint,' says...

‘Like a Prison’: Paris Suburbs Simmer Under Coronavirus Lockdown

Why Snake Eyes Was The Perfect Character For A G.I. Joe...

‘This Is Not the Hunger Games’: National Testing Strategy Draws Concerns

They Knew Saber-toothed Tigers Were Big. Then They Found This Skull.