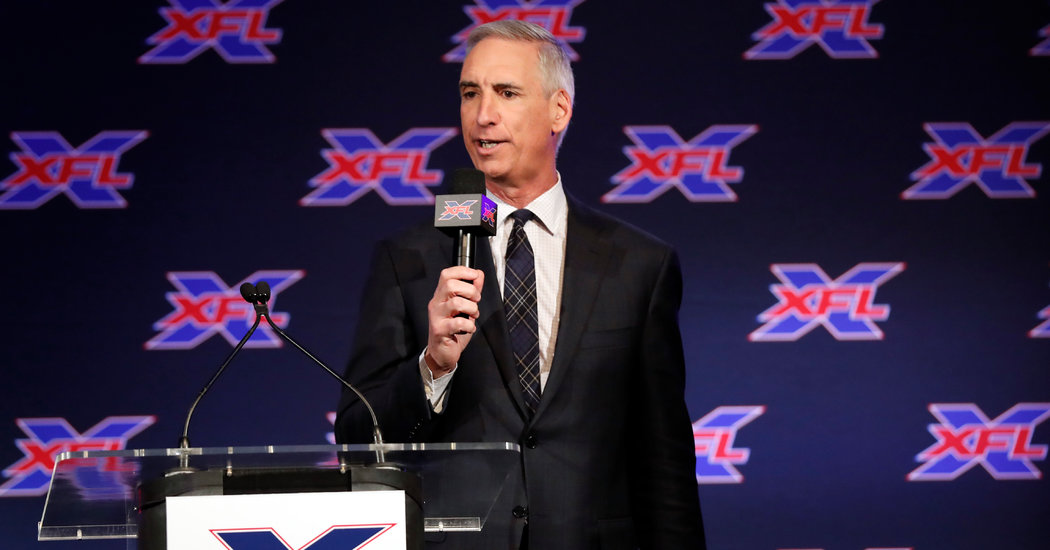 The former commissioner of the XFL recently filed a wrongful-termination lawsuit in federal court against the football league’s controlling owner, Vince McMahon, three days after the short-lived sports venture filed for bankruptcy.

The lawsuit, filed by Oliver Luck last Thursday in U.S. District Court in Connecticut, contends that McMahon breached the terms of Luck’s contract when McMahon’s company, Alpha Entertainment, fired him on April 9.

McMahon, a wrestling mogul and the face of the WWE brand, has twice dabbled in trying to build an alternative to the National Football League in the past 20 years — both times with lackluster results. The previous incarnation of the league, which this time had eight teams and sought to differentiate itself from the N.F.L. with rules changes, was also called the XFL.

Luck’s dismissal came one day before the XFL suspended its operations and laid off its staff, its season disrupted by the coronavirus pandemic that has forced the cancellation of sporting events worldwide. The XFL had played five weeks of its season.

Luck, the father of the former Indianapolis Colts quarterback Andrew Luck, was also the chief executive of the fledgling XFL. The terms of Luck’s contract, which he entered into last May, were redacted from the lawsuit. The lawsuit said that Luck, 60, was fired without cause.

“Mr. Luck wholly disputes and rejects the allegations set forth in the termination letter and contends they are pretextual and devoid of merit,” the lawsuit said.

Jerry McDevitt, a lawyer for McMahon, said in a statement on Tuesday that the reasons for Luck’s termination were explained in a letter to him and that McMahon planned to fight the lawsuit.

“As to the lawsuit he filed, his allegations will be disputed and the position of Mr. McMahon will be set forth in our response to his lawsuit,” McDevitt said.

In a bankruptcy filing in Delaware on April 13, Alpha Entertainment said that it had liabilities of $10 million to $50 million and that it had 1,000 to 5,000 creditors.

Luck was not listed as a creditor in the filing, which listed a Stamford, Conn., address as the principal place of business for Alpha Entertainment. The WWE is also based in Stamford, and McMahon has a residence in Connecticut. The amount of damages being sought by Luck in the lawsuit was not specified.

The XFL averaged about 3.1 million viewers during its opening weekend in February, according to media reports, but the ratings had sagged before the league suspended its operations.

In a statement last week, the league said that as a new enterprise it was not insulated from the harsh economic impacts and uncertainties caused by the coronavirus pandemic.

The same week that the XFL filed for bankruptcy, McMahon’s main venture, World Wrestling Entertainment, made headlines after officials in Florida said that the company was an essential business and could operate during a stay-at-home order. The WWE has a sizable training facility in Orange County, Fla., and held events this month in the state, including its marquee show, WrestleMania.

Medical Workers Should Use Respirator Masks, Not Surgical Masks

Airlines Cut International Flights in Response to the Pandemic

The N.F.L. Embraces Progressive Action, but Not Yet Kaepernick