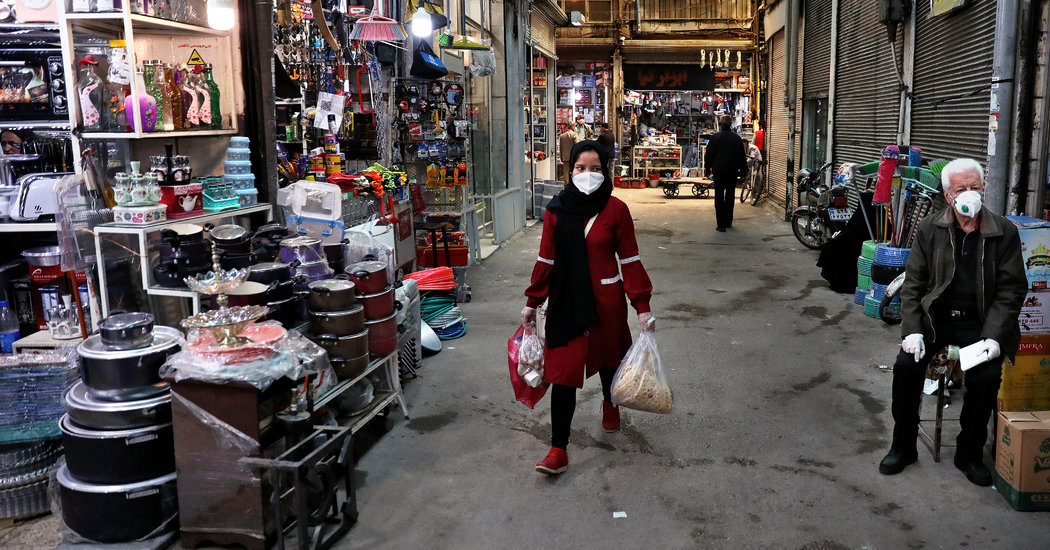 Selling Iran’s oil in defiance of an American embargo was already a risky and complicated venture for Iranian brokers. Then came the precipitous plunge in prices because of the global coronavirus clampdown, which has shriveled demand.

At first, Iranian brokers and many others in the country watched with amusement as U.S. oil prices briefly plunged below zero on Monday — meaning sellers had to pay buyers to take the oil away. Then on Tuesday the price of Brent crude oil, a benchmark blend that more directly affects Iran’s price, dropped to $20 a barrel, the lowest level in nearly two decades.

By Wednesday, Iranian oil brokers, who already sell at a discount to evade American sanctions, were nervously calibrating how far prices could drop before they would lose money.

The oil market’s collapse this week was another unanticipated blow for Iran, where the authorities have struggled to contain the worst coronavirus outbreak in the Middle East while keeping afloat an economy that has long relied on oil exports but has been hampered by American sanctions.

While Iranian leaders have significantly lessened their dependence on foreign purchases of Iran’s oil, it remains a basic industry for a country with the third-largest reserves among the Organization of Petroleum Exporting Countries.

The price collapse has further complicated efforts by Iranian leaders to reopen the economy after a series of halting and sometimes contradictory moves to shutter businesses and ban travel in hopes of slowing the coronavirus contagion. On Saturday, the authorities began lifting those restraints, reopening shopping malls and Tehran’s famed bazaar, among other things.

By official count, as of Thursday, more than 87,000 Iranians had been infected with the virus and 5,481 had died from Covid-19, the respiratory disease it causes. Those figures are widely believed to be undercounts.

President Hassan Rouhani, who had argued that fighting the contagion and salvaging the economy go hand in hand, acknowledged on Wednesday that Iran would suffer from falling oil prices but played down the severity.

Falling oil prices “has created problems for all of us, even for us,” Mr. Rouhani said at a televised cabinet meeting. “Because our dependency on oil was reduced — by choice or not, willingly or enforced by the enemy — definitely our losses will be less. ”

The oil ministry, through a handful of trusted brokers, sells its oil at about $10 below the Brent market price to create an incentive for buyers like China to risk evading sanctions. It costs Iran about $5.50 a barrel to produce crude oil.

Oil revenue makes up about 10 percent of Iran’s budget. However, the budget for this fiscal year was set based on selling a million barrels of oil a day at about $50 per barrel.

The combination of sanctions, shrinking demand for oil and falling prices has upended Iran’s budget planning.

“It will cause a lot of rearranging of government financing, but it isn’t a final blow for the Iranian economy because it has been forced to adjust so severely over the past two years,” said Henry Rome, Iran analyst for the Eurasia Group, a political risk consultancy.

In March, during the height of the coronavirus crisis, one oil trader said, Iran’s oil sales had dropped from 300,000 barrels a day to 80,000.

While Iranian leaders may be fretting about their own oil problems, they have taken pleasure in seeing what the price collapse has done to their main nemesis, the United States.

Playing on the Trump administration’s vow to eliminate Iran from the market as part of its “maximum pressure” policy, the front page of the conservative Kayhan newspaper on Wednesday read, “They wanted to reduce Iran’s oil sales to zero, but U.S. oil prices reduced to below zero.”

Other politicians minimized the threat to Iran’s economy. On the contrary, they said, it showed Iran’s resilience.

“The world is shocked because of the crashing oil prices due to the coronavirus,” said Iran’s deputy government spokesman, Mohammad Reza Noroozpour, in a tweet on Monday. “Let’s not forget that our government has managed the country without relying on oil revenues for two years.”

Iran is somewhat of an anomaly among oil rich countries such as Saudi Arabia and Algeria, whose economies are heavily dependent on oil. U.S. sanctions targeting Iran’s oil sales have forced it to find other sources of revenue, including higher taxes and privatization of government holdings.

Since Washington imposed sanctions on Iran after President Trump renounced the nuclear accord negotiated by the Obama administration, Iran’s oil sales have dropped from 2.5 million barrels to about 300,000 barrels per day.

China also serves as a key partner for helping Iran keep its refineries and oil fields operational. Iran rents tanker farms offshore in China and stores the excess barrels of oil that it cannot sell, according to oil brokers in Iran.

Mr. Rouhani has said that his government will face a budget deficit of one-third. Economists and analysts predict Iran’s economy will be further strained this year because of sanctions and the effects of the coronavirus.

Iran has said U.S. sanctions have denied the country about $200 billion in revenue and have impeded its efforts to fight the virus. Iranian officials have lobbied to convince Washington to lift sanctions for humanitarian reasons, but so far Mr. Trump has not budged.

At the same time, Iran has remained defiant in resisting direct talks with Washington and continuing strategies deemed by the United States to be provocative.

On Wednesday the elite Islamic Revolutionary Guards Corps launched a military satellite into orbit and said it was capable of both defense and collecting surveillance and imaging. A few days earlier, the Guards naval force approached a U.S. Navy ship in the Persian Gulf.

Mr. Trump reacted to the news of the satellite launch by tweeting that he had authorized the Navy to “shoot down” Iranian boats if they harass U.S. ships.

The Revolutionary Guards commander-in-chief, Gen. Hossein Salami, said on Thursday that Iran had ordered its naval forces to strike back at American ships if their vessels threaten the security of Iranian vessels. “Any action will result in a firm, swift and strong reaction from us,” General Salami said.

CDC removes guidance about airborne spread of the coronavirus

Rev. Georg Ratzinger, Choirmaster and a Pope’s Brother, Dies at 96

With Broad, Random Tests for Antibodies, Germany Seeks Path Out of...

A Team by Any Other Name Is Fine, It Turns Out

In a Desert’s Burning Sands, Shrimp