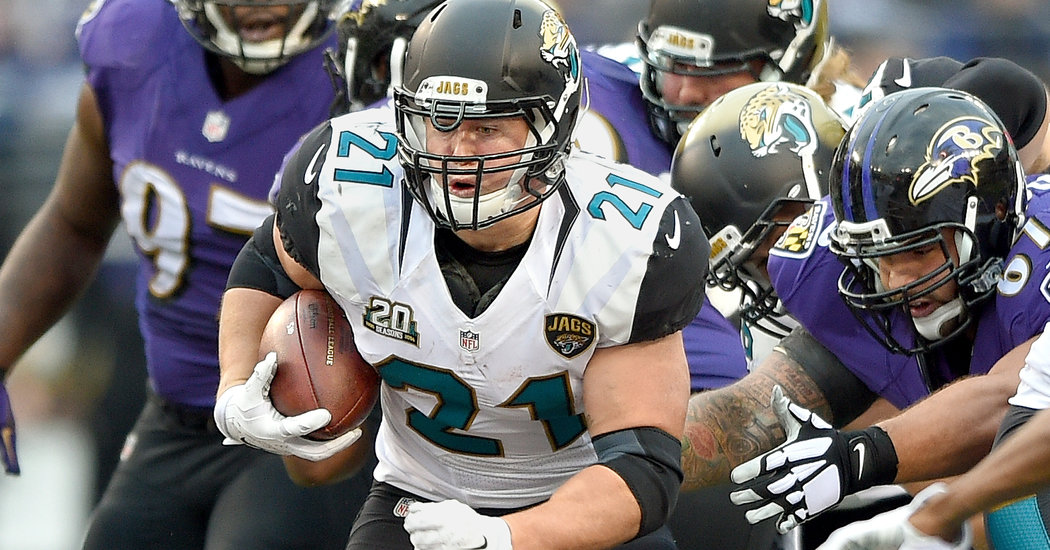 I stared at the TV screen in disbelief. My replacement had just been chosen. I could hear it in the echo of these words: “With the 36th pick of the 2015 N.F.L. draft, the Jacksonville Jaguars select T.J. Yeldon, running back from Alabama.”

Just a year earlier, the Jaguars had signed me as their starting running back. After one season, which was derailed by a right foot injury that lingered through the year, Jacksonville was moving away from what I had been told about being “the guy.” Lying in bed that night, I cried for the first time in years.

I fought for my job as the Jaguars marquee runner the following season, but that draft day five years ago began the end of my 22-year football career.

I’ve been thinking about that day not just because the N.F.L. draft is here again, but because many thousands of athletes have had their own dreams spoiled this year — by the coronavirus pandemic. Perhaps the lessons I have learned can help them.

I was welcomed into the world with a notice in The Press-Enterprise of Riverside, Calif., written by a sportswriter who knew my parents as outstanding athletes. The item was addressed to the coach of my future high school:

“Gary Campbell: there’s a prospect for the Cougars who just moved into the area. … Toby should be ready to join the Cougars in 2002. Hope you’re still coaching then.”

I ended up playing for Coach Campbell and earning a scholarship to play at Stanford, where I led the nation in rushing yards and touchdowns and was the runner-up for the 2009 Heisman Trophy in the closest vote in the trophy’s history.

The Minnesota Vikings picked me in the second round of the 2010 N.F.L. draft, allowing me to realize all I had dreamed about as a kid. I ran onto the field in front of tens of thousands of fans, with millions more watching at home. I took the field as the teammate of my favorite player from childhood, Brett Favre. I was in the NCAA Football and Madden NFL video games, and drafted in fantasy leagues. I even celebrated with a few touchdown dances of my own — a two-handed kiss to the fans followed by a double-armed biceps flex.

There was immense pressure, but I thrived. True, I often could not lift my arms high enough to hug my mom and my wife after games. I watched my mistakes and shortcomings shared daily by the news media and received threats from fans online. But the physical and mental pain were worth it. I got paid to play a game I loved. I was one in a million.

“Not for Long” is an appropriate nickname for the N.F.L. The average career for a player lasts 3.3 years. At the league’s rookie symposium we were told: “There are only two guarantees in the N.F.L. You will be injured, and you will be released before you’re ready to be done playing.”

I was a testament to both. I had multiple operations, broke several bones and tore various ligaments throughout my six-year N.F.L. career. I managed a core injury poorly in 2015, thinking that playing through it would help my career more than surgery and rest. After the Jaguars released me in 2016, I believed I could still play. But 32 general managers disagreed. Suddenly I was no longer one in a million. I was one of a million, trying to find a new identity.

I have always considered myself more than a football player. That belief played a huge part in my decision to commit to Stanford and to graduate with a degree in management science and engineering before going pro. I had set myself up for a future beyond football. Yet faced with the end of my playing days, I struggled.

I did not jump into a career right away because I was lost. Though I did not define myself through football, confronting the reality of life without it was scary and confusing. I entered business school in 2018, hoping for clarity.

What would excite me as football once did? Why do potential employers see me as no one other than a football player? My emails are quickly answered, and meetings are set up, but questions such as “What do you bench press?” and “Who hit you the hardest?” dominate the conversation. I was once one of the best in the world at my job. Now I’m seen as having no relevant work experience — where others have worked for a decade and can walk the walk and talk the talk.

In March, the N.C.A.A. abruptly canceled all championships and all spring collegiate sports because of the coronavirus, effectively spoiling college seniors’ final season of competition. And this week, when the N.F.L. draft will take place not on a stage in Las Vegas, as originally planned, but from a studio, a mere 255 athletes will hear their names called and get the chance to live their dreams. The thousands who go undrafted, along with the tens of thousands of college seniors whose seasons were ruined, will join me searching for new meaning and employment.

Compared with most, I was fortunate. I left collegiate sports on my own terms and played professionally. Nevertheless, the abrupt ending resonates. In my case it was because of injuries; for current athletes it is the coronavirus.

Our whole lives we were taught never to show fear, weakness or pain, yet when confronted with the end of our athletic careers we are afraid, uncertain, lost. These feelings are natural and common. Embrace them. Cry. Ask for help. Reach out to former teammates, classmates and mentors, and educate yourself about their careers and future opportunities.

My reflection showed me that I want to help athletes pivot and transition into the next phase of their lives.

You’re already a great competitor. Now you’re competing in a new way. Compete for the next opportunity and compete for fun. Above all else, remain confident. Always remember that athletic competition taught us invaluable lessons and instilled qualities translatable to every facet of life. Discipline and perseverance through hardship are ingrained from a lifetime in sport.

Toby Gerhart was drafted 51st over all by the Minnesota Vikings in the second round of the 2010 N.F.L. draft. He played six professional seasons and is graduating in June from the Stanford Graduate School of Business.

Facebook Dominates Most Downloaded Apps of 2019 Listing, Covering Both Android...

Germany Criminalizes Burning of E.U. and Other Foreign Flags

Burundi Turns Out to Replace President of 15 Years, Pandemic or...

Sabrina Ionescu’s Big Moment Wasn’t the One She Expected