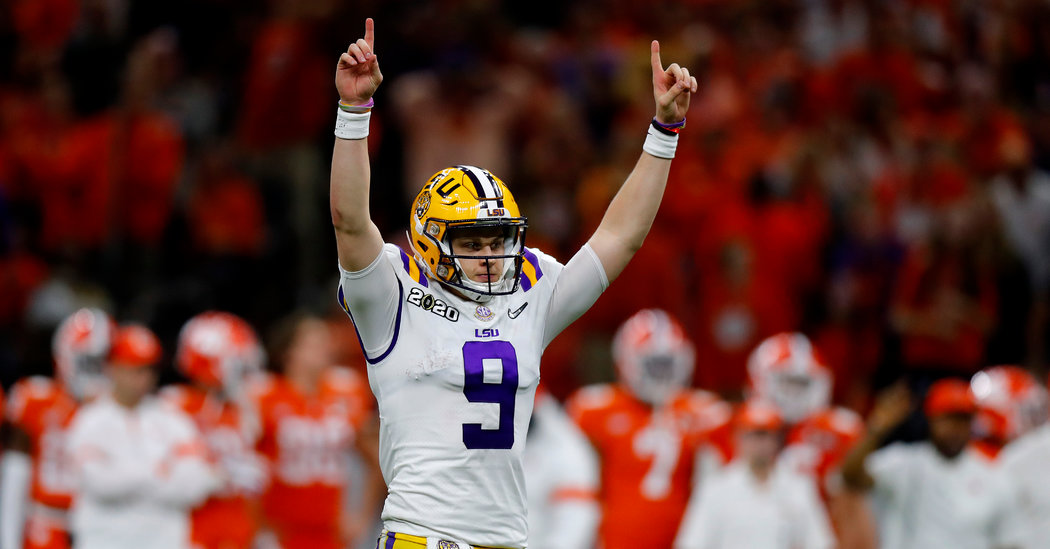 For the past five years, the N.F.L. has turned its college draft into a movable sports feast, taking it from New York, where it had been hosted for nearly a half-century, to Chicago, Philadelphia, Dallas and Nashville. Television broadcasters loved the new scenery, as fans across the country tuned in to witness the pageantry and as sponsors lined up to attach their companies to these increasingly supersized football parties.

This year’s event was going to be the granddaddy of excess, held on The Strip in Las Vegas, with top prospects like Joe Burrow and Chase Young boating to a stage set in the fountains at the Bellagio Hotel. The spectacle, which was expected to draw 50,000 fans, was also supposed to serve as a coming-out party for the Raiders, who are set to play their first season in Las Vegas this year.

Though the pandemic has forced the N.F.L. to scrap the Vegas stage for a purely televised draft, with players participating via remote video, the league will adapt its broadcast formula to accommodate spectacle, wedging in telethon-style performances from the likes of the comedian Kevin Hart and the musician Harry Connick Jr. There will also be fund-raising prompts for charities related to Covid-19.

How that star-powered programming will jibe with the main event is anybody’s guess. Commissioner Roger Goodell will announce selections from the basement of his home. The league has welcomed fans to boo him, as is tradition, through a beer-sponsored promotion.

Draft prospects will be shown in their living rooms via remote cameras, the league having mailed technology kits to 58 players ahead of time. Of course, social distancing guidelines still apply at home, and the league asked that players not gather in large groups or wear or consume anything not branded by an approved list of sponsors. In some ways, that footage may recall the simpler days before fans attended the event. In others, viewers will still be reminded that the draft — broadcast to millions of fans on several TV networks as well as on various streaming apps — is as much about celebrating the business of the N.F.L. as it is about the players.

All times are Eastern.

The 85th N.F.L. draft will be broadcast on ABC, ESPN, ESPN Deportes and the NFL Network, and it will be streamed here.

The first round is scheduled to start Thursday at 8 p.m. Day 2, which covers the second and third rounds, will begin Friday at 7 p.m. Day 3, consisting of Rounds 4 to 7, will begin at noon Saturday.

How Will a Remote Draft Work?

In normal years, team employees assemble in so-called war rooms at their facilities. To communicate effectively for this draft, teams have outfitted their decision makers with communication equipment at home, including computers, video screens and reliable, fast internet connections. Seattle Seahawks General Manager John Schneider, who lives near the team’s training facility in Renton, Wash., said technicians had ripped out walls at his home and installed draft boards in his dining room (one each for offensive and defensive prospects), as well as video screens and a big printer in his home office. The technicians also strengthened the cellphone and Wi-Fi signals.

“I live in a dumb house, not a smart house,” Schneider said in an interview last week, though he added that he felt uneasy having workers in his home who were unable to practice social distancing.

Other coaches and executives posted details of their at-home setups on social media. John Lynch, the general manager of the San Francisco 49ers, showcased added monitors and landlines as part of his work station, similar to the draft room in the house of New Orleans Saints Coach Sean Payton.

As in recent years, quarterbacks and wide receivers are expected to take center stage. Burrow is widely favored to chosen first over all, but Justin Herbert from Oregon, Tua Tagovailoa from Alabama and Jordan Love from Utah State should also garner strong interest, which means this could be the fifth consecutive draft with at least three quarterbacks taken in the first round.

Fans will also hear the names of a lot of players from the SEC, college football’s most powerful conference. Two dozen of the top prospects in the draft are from SEC schools, including eight from L.S.U., which won the national championship, and seven from Alabama. Two of those players from Alabama are Jerry Jeudy and Henry Ruggs III, who are among the top wide receivers in the draft. They are looking to become the fifth pair of receivers from the same school drafted in the first round in the same year since 1967.

Offensive linemen have also been in favor in recent years as teams aimed to protect their quarterbacks. Mekhi Becton from Louisville, Andrew Thomas from Georgia, Jedrick Wills from Alabama and Tristan Wirfs from Iowa are considered the most likely from their position group to be selected early.

The San Francisco 49ers made it to the Super Bowl last season on the backs of their dominant pass rushers. Other teams surely took note. Ohio State defensive end Chase Young is likely to be the first defensive player chosen in the draft, as the Washington Redskins have the second overall pick and a defensive-minded new head coach in Ron Rivera. Young would follow in the footsteps of Nick Bosa, a former college teammate, who was chosen second over all last year by the 49ers. Derrick Brown from Auburn and Javon Kinlaw from South Carolina are names to watch as well.

Continuing a recent trend, teams will also seek to strengthen their defensive backfields. Jeff Okudah from Ohio State is expected to be the first cornerback chosen, especially if the Detroit Lions, who traded the Pro Bowl cornerback Darius Slay in March, keep the third overall pick. C.J. Henderson from Florida and Kristian Fulton from L.S.U. also have strong chances of being first-rounders.

The pandemic could alter teams’ strategies when making picks. Because team facilities are closed and all travel banned, coaches and scouts have had fewer in-person interviews with prospects than in other years. This could prompt teams to pick more players from the Power 5 conference programs, because there is more information available on those prospects.

The lack of information about players from smaller schools may make known quantities — free agents as well as college players who appeared in a lot of televised games — more valuable, leading teams to make more trades than in a typical year. In the past 20 years, the draft has featured an average of 13 trades in the first round. This year, the Atlanta Falcons (16th pick) and the Tampa Bay Buccaneers (14th pick) may have an incentive to trade up and grab a proven player to complement their splashy free agent signings. The running back Todd Gurley is back in Georgia, where he played college ball, and Tom Brady is now renting Derek Jeter’s house in Tampa.

Some teams could capitalize on the chaos, particularly those with multiple first-round picks — like the Miami Dolphins, Raiders and Jacksonville Jaguars, who have been deliberately rebuilding their rosters.

Amazon Flex drivers won’t be paid if they have to stay...

War Within War: As Saudi Prince Edges Away from Yemen, His...

To Safeguard Its Future, Tennis Seeks Unity. Even With the French...