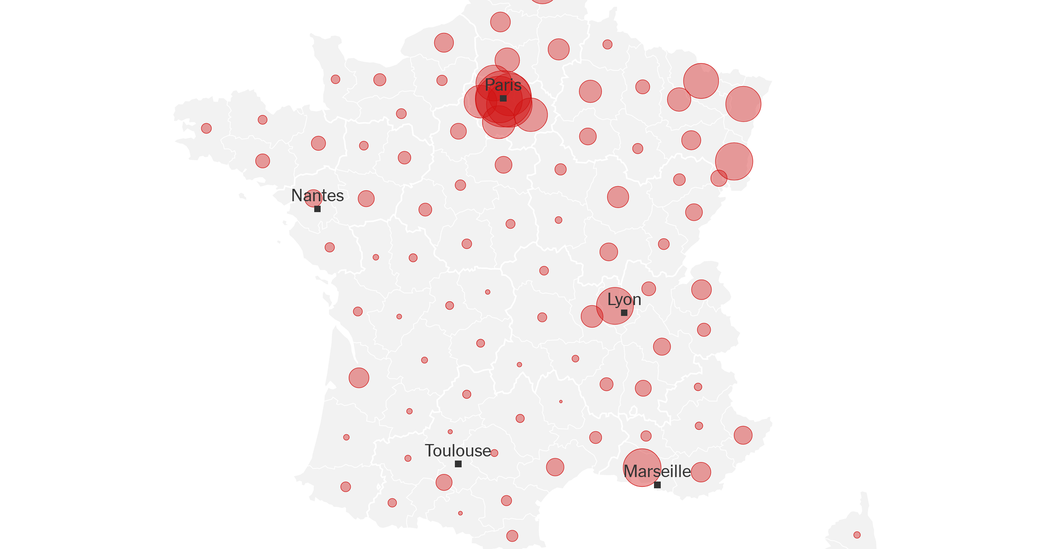 There have been at least 124,000 confirmed cases of coronavirus in France, according to the French government. As of Saturday afternoon, 22,614 people had died.

National health authorities in France do not provide regional data for test-confirmed cases of the virus, but they do report regional data for the number of people hospitalized for Covid-19 and how many of those people have recovered or died.

Double-click to zoom into the map.

Use two fingers to pan and zoom. Tap for details.

Source: Public Health France. Circles are sized by the number of people there who have been hospitalized with the virus, which may differ from where they contracted the illness.

Here’s how the number of hospitalizations and deaths are growing in France:

Health authorities in France are cautiously optimistic that the country has reached a plateau, with decreasing numbers of hospitalized patients and patients in intensive care. But officials have warned that the epidemic is not over yet.

The country went into a lockdown in mid-March, restricting movements to essential trips like grocery shopping and medical appointments, severely limiting outside physical activity, and enforcing, when possible, working from home. President Emmanuel Macron has set May 11 as the date to gradually lift the nationwide lockdown, although some businesses will remain closed.

The government is expected to present its full lockdown exit strategy in the coming weeks, but it has suggested that it would pivot around a strict continuation of social distancing measures, including the likely compulsory use of masks in public transportation, and temporary isolation for anyone who tests positive for the disease.

France has one of Europe’s more robust economies and a vaunted universal health care system, but the virus has put both under serious strain. Mr. Macron was in the middle of a hotly-contested pension reform when the outbreak started and has faced criticism for the government’s handling of mask shortages and for its lack of widespread testing.

How Cases Are Growing

Here’s how the number of new cases is changing over time:

Note: Scale for deaths chart is adjusted from cases chart to display trend.

A New York Times review of mortality data in 12 countries showed that official death tallies have undercounted deaths during the coronavirus outbreak because of limited testing availability.

France is one of a few countries in Europe that has started to include Covid-19 deaths in retirement or nursing homes in its country-wide daily death tallies, meaning the overall picture of mortality is more accurate. But the data skewed higher in the early weeks of April when previously unrecorded deaths were suddenly added to the nationally tally.

Generally speaking, while France has increased its testing capacities, it has yet to massively test people like its neighbor, Germany. The national public health authority acknowledged this month that the reported number of test-confirmed cases was lower than the real number of cases.

Where You Can Find More Information

Read more about the virus’s impact on France’s economy and on its vaunted health system, the strain the epidemic is putting on poor urban suburbs, and how Covid-19 has changed attitudes towards mask-wearing. In Paris, the city imposed a curfew on outdoor sports, and around the country people have fled to their second homes. Nearly 60 percent of sailors aboard the Charles de Gaulle, France’s flagship aircraft carrier, have become infected.

Reds Announcer Is Suspended After Using Homophobic Slur on Air

Spain’s Villages Wage a Lonely Fight Against the Coronavirus

One Meeting in Boston Seeded Tens of Thousands of Infections, Study...

Rayvolt's pricey new Torino e-bike looks like nothing else on the...

Angela Merkel Guides the E.U. to a Deal, However Imperfect

French Soccer’s Renegade President Would Like a Word. With Everyone.