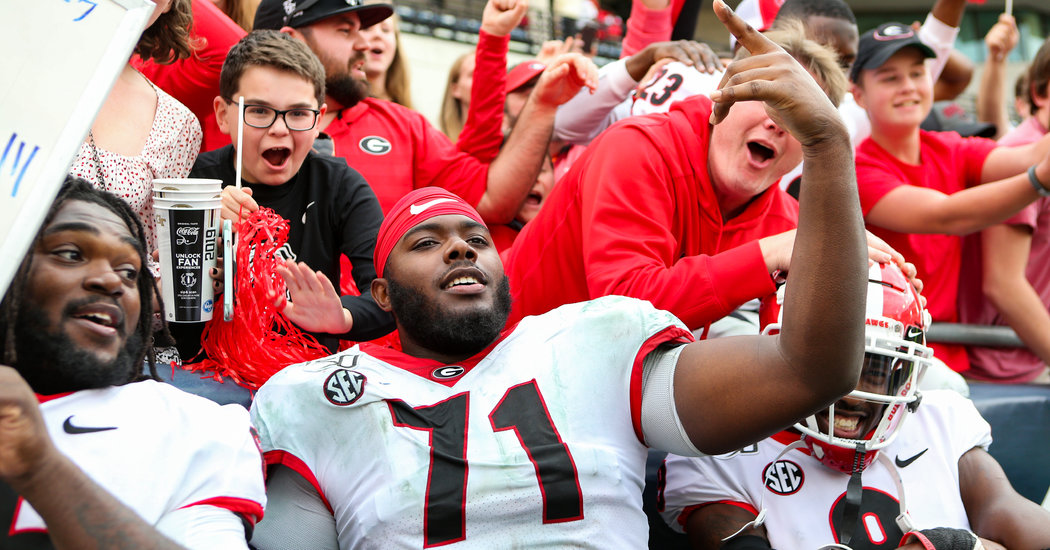 Making protection for quarterback Daniel Jones a priority, the Giants on Thursday selected Andrew Thomas, a Georgia offensive tackle, at fourth over all in the N.F.L. draft.

Then the Jets, aiming to add support for their young quarterback, Sam Darnold, chose Mekhi Becton, an offensive tackle from the University of Louisville, at 11th over all.

“We feel that he is ready to make this jump,” Dave Gettleman, who is headed into his third season as the Giants’ general manager, said after making the pick. “He’s young, like all these guys, but we feel very strongly that he is ready and capable.”

In addition to seeking protection for Jones, who took over for Eli Manning and started 12 games after being picked sixth over all in last year’s draft, the Giants needed to bolster the line to clear space for running back Saquon Barkley, who was selected second over all in the 2018 draft. The Giants finished in the bottom third of the league in offensive yards per game (338.5, 23rd place). Thomas, who is 6-foot-5 and 320 pounds, excels at pass protection and is very athletic in the open field, which Gettleman said made him a key target for the Giants.

“Once you draft a quarterback, you get guys in front of them that can keep them upright,” Gettleman said. “This was an important piece for us in Daniel’s development, and for Saquon as well.”

Gettleman has emphasized the importance of acquiring big linemen, whom he likes to call “hog mollies,” and this year’s draft was considered rich in offensive tackles. Thomas was the first of six taken in the first round, and Becton was the third.

The Giants ended 2019 with a 4-12 record, then fired Coach Pat Shurmur and replaced him with Joe Judge, who had no head coaching experience. The team’s next pick will be No. 36, in the second round.

Thomas is from Lithonia, Ga., and has a passion for music. He grew up playing the drums and taught himself piano in college.

Becton started 33 games in three seasons at Louisville and can play left or right tackle. He is 6-foot-7 and 365 pounds, and Jets General Manager Joe Douglas said that the team had noticed Becton as an underclassman because of his size. He added that Becton’s footwork, heavy hands and ability to move people off the ball made him a promising player for a team that allowed 52 sacks last season, the fourth most in the N.F.L.

“He is a tough guy to get around playing that tackle spot,” Coach Adam Gase said of Becton. “He brings an edge to us. He can add some nasty to the offensive line.”

Becton said his ideal playing weight would be 350 to 355 pounds, 10 to 15 pounds lighter than he is now. He described himself as a dominating player.

Uncertain Results in Study of Convalescent Serum for Covid-19

A Blow to the Head Makes an Instant Hero in India

10 new trailers to watch this week

The history of Blackberry: The best BlackBerry phones that changed the...

In a Pandemic, Everything is Canceled. But Not Our Anxiety.

Valencia Took Swift Action on Coronavirus, Then Took a Lot of...