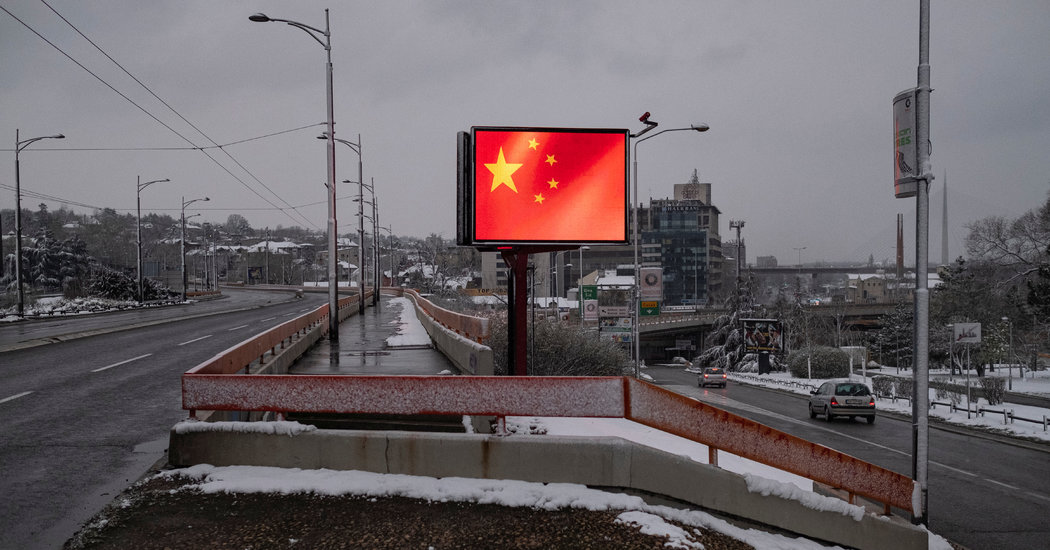 BRUSSELS — Bowing to heavy pressure from Beijing, European Union officials softened their criticism of China this week in a report documenting how governments push disinformation about the coronavirus pandemic, according to documents, emails and interviews.

Worried about the repercussions, European officials first delayed and then rewrote the document in ways that diluted the focus on China, a vital trading partner — taking a very different approach than the confrontational stance adopted by the Trump administration.

The initial European Union report, obtained by The New York Times, was not particularly strident: a routine roundup of publicly available information and news reports.

It cited Beijing’s efforts to curtail mentions of the virus’s origins in China, in part by blaming the United States for spreading the disease internationally. It noted that Beijing had criticized France as slow to respond to the pandemic and had pushed false accusations that French politicians used racist slurs against the head of the World Health Organization. The report also highlighted Russian efforts to promote false health information and sow distrust in Western institutions.

“China has continued to run a global disinformation campaign to deflect blame for the outbreak of the pandemic and improve its international image,” the initial report said. “Both overt and covert tactics have been observed.”

But China moved quickly to block the document’s release, and the European Union pulled back. The report had been on the verge of publication, until senior officials ordered revisions to soften the language.

“The Chinese are already threatening with reactions if the report comes out,” Lutz Güllner, a European Union diplomat, wrote to colleagues on Tuesday in an email seen by The Times.

The sentence about China’s “global disinformation” campaign was removed, as was any mention of the dispute between China and France. Other language was toned down.

The delay and revisions incited anger and frustration among some diplomats and government disinformation analysts. At least one analyst formally objected, writing to her bosses that the European Union was “self-censoring to appease the Chinese Communist Party.”

The fight over the document is part of a broad, global battle over the coronavirus narrative. And it comes at a time when the European Union hopes to win trade concessions from Beijing and restore a rich relationship once the pandemic has passed.

Chinese officials initially tried to silence doctors and play down the seriousness of the coronavirus outbreak in the city of Wuhan late last year. Eager to have the world forget that chapter, China has also tried to focus world attention on the contributions of its scientists and its worldwide donations of medical supplies.

The Trump administration has consistently blamed China for responding slowly when the virus emerged late last year and for spreading false information about the pandemic.

Even after the Trump administration reached a brief truce with the Chinese government to stop trading public barbs about the crisis, both sides have resumed their finger-pointing. President Trump said last week that his government was trying to figure out whether the virus came from a Chinese lab, while China has accused the American government of trying to distract the public from its own mistakes.

Against that backdrop, the European Union was expected to issue its report. Early Tuesday morning, Politico quoted from the document in its morning newsletter and said that the paper was expected to be published that day.

But Chinese officials quickly contacted the European Union’s representatives in Beijing to try to kill the report, according to two diplomats with knowledge of the exchange and emails recounting the calls.

The European Union, like the United States, has struggled to find a coherent approach toward combating disinformation. A task force of analysts regularly highlights foreign propaganda, but its work has been sanitized at times over political concerns.

Senior officials have softened language about Russia in the past as the bloc tried to improve relations with Moscow. A report last year on pre-election propaganda stripped out all references to Russian support for certain European political groups.

The new European Union report comes as the bloc is trying to get better treatment for its companies in China. Two-way trade was estimated at more than $1.6 billion per day before the pandemic. German automakers and French farmers, along with other industries, rely heavily on exports to China.

Peter Stano, a European Union spokesman, said Friday that the report had not been delayed. “It is ready once it is complete, cleared in an editorial process and ready to be uploaded,” he said.

On Tuesday morning, however, an email circulated inside the disinformation task force team with the subject line: “READY for publication.” A supervisor approved it and an analyst was about to publish a summary online.

But Esther Osorio, a senior adviser to the European Union’s top diplomat, Josep Borrell, ordered it held, according to an email.

While analysts say that the Kremlin’s tactics are intended to undermine confidence in Western governments, the Chinese government is focused more on reshaping its role in the coronavirus story and deflecting blame for the pandemic.

Central and Eastern Europe, in particular, are a hotbed for disinformation tactics, diplomats say. “Poland is the petri dish for Russia and China to try out their disinformation, their trolls and bots,” the American ambassador in Poland, Georgette Mosbacher, said in an interview on Thursday.

As officials in Brussels delayed publishing their report, Chinese officials in Beijing kept up the pressure with at least two high-level calls to the European representatives there, according to emails and interviews with diplomats. Chinese officials expressed alarm at the news of a coming report and urged the bloc not to release the document.

Ms. Osorio, the aide to Mr. Borell, asked analysts to revise the document to focus less explicitly on China and Russia to avoid accusations of bias, according to an email and interviews. She asked analysts to differentiate between pushing disinformation and aggressively pushing a narrative, and to document each “as we already see heavy pushback from CN” — an abbreviation for China.

Mr. Stano, the European Union spokesman, said no revisions to the document had been ordered in response to diplomatic pressure. Internally, though, some analysts objected to changing the language in the face of criticism.

“Such appeasement will set a terrible precedent and encourage similar coercion in the future,” an analyst, Monika Richter, wrote to her colleagues and supervisors in an email seen by The Times. She said that European Union diplomats were “self-censoring to appease the Chinese Communist Party.” She also wrote that it was a lie to claim that the document had not been scheduled for release.

When the public summary of the report went online on Friday, the section on state-sponsored disinformation, which had singled out China and Russia, had been folded into the rest of the report. Many of the examples related to China’s actions were included at the bottom, under the heading “Other selected activities.”

The new version omitted references to China’s criticism of France and a pro-Chinese bot network in Serbia.

Jakub Janda, executive director of the Prague-based European Values Center for Security Policy, a research organization, said the disinformation report was a low-stakes way for China to gauge its influence with the European Union amid the pandemic.

“It’s one piece of paper where China is being called out by the E.U.,” said Mr. Janda, whose group has been sharply critical of Chinese and Russian interference in the West. “It’s clearly a test.”

For the Men’s Doubles Champs, One Constant Holds: ‘A Grand Slam...

LG reveals the name for its upcoming phone: LG Velvet

At In-Person Choir Rehearsals, a Balance Between Joyful and Careful